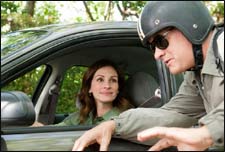 Samrat Sharma / fullhyd.com
EDITOR RATING
6.5
Performances
Script
Music/Soundtrack
Visuals
7.5
4.5
7.0
7.0
Suggestions
Can watch again
No
Good for kids
No
Good for dates
Yes
Wait to rent it
No
Tom Hanks is a nice man - he believes in the inherent goodness of life, and yet is not naive. His direction in Larry Crowne carries that lightness of touch and that belief in the opportunity and life in America. Unfortunately, it's the writing that undoes it. At the core of the movie is a rotten romance, and it is because the film is peppered with a nice yet quirky cast of people that the film feels more alive than it has any right to be.

When Larry Crowne(Tom Hanks) loses his job at a big store because of not having a college degree, he decides to go back to school. He chooses the one nice college campus in all the world and enrolls in a public speaking class taught by Mercedes Tainot (Julia Roberts). As with Tom Hanks in every film, he slowly wins over a large cast, and subsequently, the girl.

Unfortunately, the script spends a lot of time preparing the relationship between Talia (Gugu Mbatha-Raw), the girl who helps Larry sort his life out, and then Larry's interactions with his neighbours, classmates and a varied cast of characters who are here simply to be quirky (most criminal is casting George Takei to simply be George Takei).

So much so that at no point do we see the relationship between Mercedes and Larry blossom. That is simply a given - something we have to believe. The script makes no effort at all to sell this romance. For the longest time, we see Mercedes simply dislike Larry throughout and never make an effort toward him. Most egregious is the fact that Hanks and Roberts seem to have very little chemistry on screen. It hurts to see 2 talented actors try everything and not manage to sell us the script's shortcomings.

It's a loose, lazily written film to show us the variety of characters and parade Larry as an everyman among them. Larry Cronw is never particularly engaging in that, but here's what saves it: the cast. The rest of the actors playing these roles are all fantastic, and deliver one funny moment after the other.

Add to it the inherent niceness in Tom Hanks that permeates the entire film, and you end up having a decent time despite the poorly written nature of the film. Also, let's face it - in a month where Transformers 3 is the big name in the theaters, a poorly-written Tom Hanks film is virtually a masterpiece. If you're one of those who'd rather not see metals and explosion and stupidity, this makes a good repast.
Share. Save. Connect.
Tweet
LARRY CROWNE SNAPSHOT

ADVERTISEMENT
This page was tagged for
Larry Crowne english movie
Larry Crowne reviews
release date
Tom Hanks, Julia Roberts Sarah Mahoney
theatres list
Follow @fullhyderabad
Follow fullhyd.com on
About Hyderabad
The Hyderabad Community
Improve fullhyd.com
More
Our Other Local Guides
Our other sites
© Copyright 1999-2009 LRR Technologies (Hyderabad), Pvt Ltd. All rights reserved. fullhyd, fullhyderabad, Welcome To The Neighbourhood are trademarks of LRR Technologies (Hyderabad) Pvt Ltd. The textual, graphic, audio and audiovisual material in this site is protected by copyright law. You may not copy, distribute, or use this material except as necessary for your personal, non-commercial use. Any trademarks are the properties of their respective owners. More on Hyderabad, India. Jobs in Hyderabad.