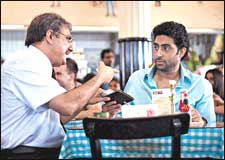 EDITOR RATING
5.0
Performances
Script
Music/Soundtrack
Visuals
NA
NA
NA
NA
Suggestions
Can watch again
NA
Good for kids
NA
Good for dates
NA
Wait to rent it
NA
Watching Bluffmaster is mostly like boiling an egg. It’s a slow, boring process as the egg gets boiled, the only interesting part is for 5 minutes at the end as you actually eat the boiled egg that finally emerges out of what was so far a monotonous shell, and the boiled egg is not the tastiest dish you’ve ever had.

The only redeeming feature of Bluffmaster is a surprising and rather innovative ending – the problem is, there is no build-up to that ending, and it looks more like an annexure, with its own cover and spiral binding. The film itself then ends up being neither an edge-of-the-seat thriller nor a whodunit, instead settling for being a soulless progression of a heavily perforated script.

Roy (Abhishek Bachchan) is an accomplished con, parting people from significant amounts of their hard-earned money by staging elaborate hoaxes. One day one of his sins catches up with him when his fiancé Simmi (Priyanka Chopra) breaks off as she gets to know what he really does. He cannot forget her, but he still doesn’t turn an honest penny.

One day he runs into Dittu (Ritiesh), a clumsy mini-conster who unknowingly tries to shave some dough off the master of bluff himself, with discouraging results. But Dittu becomes an apprentice of Roy, and as a bond builds between them, he discloses to Roy that his life’s ambition is to rip off Chandru (Nana Patekar), a ruthless villian who was the cause for Dittu’s father losing all his life’s savings and even going wrong in the garret, losing his sanity completely.

Roy has unfortunately just been diagnosed by Dr. Bhalerao (Boman Irani) with a malignant tumor in the brain, and is told he has just 3 months left. He wants to do some good in his last few days on earth, and decides to take on Chandru for Dittu’s sake, even if it’s flirting with the undertaker.

The second half has Roy and Dittu slowly lure Chandru into a plot that they hatch, and finally skim Rs. 5 crores off him. But Chandru is hardly one to forgive and forget, and readies all his resources to wipe the floor with the duo.

The script has so many holes, you start wondering if you can contribute some yourself. The primary problem with Bluffmaster, though, is the slow pace and the lack of the usual glitz and chic that you’ve grown to associate with mainstream Bollywood fare these days, of which Bachchan’s own recent Dus was a torchbearer. Most of the time, you get the feeling of nothing happening out there – there’s not enough color or vibrancy, and nobody’s setting the screen on fire.

Abhishek Bachchan seems to be finding his niche in the unamused self-assured slicker part, and does a fair job. Priyanka Chopra is characterized by a fairly abbreviated role and enervated chemistry with her co-lead. And a pimple. Ritiesh may not make it into his own in the big league – he’s too short for starters – but turns in a decent performance nevertheless. Nana Patekar has some good lines – either that, or he makes any line look good. He’s in just half of the film, and that’s a loss. Boman Irani is his usual eccentric self.

The songs are good, with a hummable rap/hip-hop number as the credits roll at the end, sung by Abhishek Bachchan and Sunidhi Chauhan. The credits also thank Aishwarya Rai and Sanjay Dutt, who are mysteriously nowhere to be seen.

Slow and tentative, this one never finds its moorings. After three successive hits, Abhishek Bachchan finally avoids superstardom, at least for the time being.
Share. Save. Connect.
Tweet
BLUFFMASTER SNAPSHOT

ADVERTISEMENT
This page was tagged for
Bluffmaster hindi movie
Bluffmaster reviews
release date
Abhishek Bachchan, Ritiesh Deshmukh
theatres list
Follow @fullhyderabad
Follow fullhyd.com on
About Hyderabad
The Hyderabad Community
Improve fullhyd.com
More
Our Other Local Guides
Our other sites
© Copyright 1999-2009 LRR Technologies (Hyderabad), Pvt Ltd. All rights reserved. fullhyd, fullhyderabad, Welcome To The Neighbourhood are trademarks of LRR Technologies (Hyderabad) Pvt Ltd. The textual, graphic, audio and audiovisual material in this site is protected by copyright law. You may not copy, distribute, or use this material except as necessary for your personal, non-commercial use. Any trademarks are the properties of their respective owners. More on Hyderabad, India. Jobs in Hyderabad.