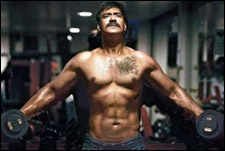 Nupur Barua / fullhyd.com
EDITOR RATING
7.0
Performances
Script
Music/Soundtrack
Visuals
7.0
7.0
6.0
7.0
Suggestions
Can watch again
Yes
Good for kids
No
Good for dates
Yes
Wait for OTT
No
When Amitabh Bachchan tweets, "SINGHAM!!! Everything right for a complete masala entertainerâ€¦," you sit up and take notice. He should know.

After all, Rohit Shetty and others have made it quite clear that Singham is a nod to the days of uncomplicated cinema, when honest angry young men became legends, and when rural settings were as important as urban ones. In the midst of all the drama, the hero managed to take some time out to romance the heroine, and the love angle was never too complex.

Singham's story goes like this. In Goa City, there resides a villain, Jaykant Shikre (Prakash Raj). He is the unofficial don of the city, and everybody pays obeisance to him. Defy him, and you will pay with your life, as one honest cop, Rakesh Kadam (Sudhanshu Pandey), soon discovers.

In a little village-town, far away, on the Maharashtra-Goa border, there resides Baji Rao Singham (Ajay Devgn), a police inspector. The lucky man has been posted in his own hometown, Shivgad, but, more often than not, he finds himself personally involved in tiffs between the villagers. He therefore doles out justice in his own fashion, and remains the pride of his parents and the inhabitants of Shivgad.

His father's childhood friend, Gautam (Sachin Khedekar), now lives in Goa City, and visits Shivgad infrequently and reluctantly. Gautam's daughter, Kavya (Kajal Aggarwal), in true filmi style, falls in love with Singham when she realises how macho and honest he is.

Shikre and Singham first meet when the former is forced to visit Shivgad to report to its police station. After an electric confrontation, they become sworn enemies, and the rest is pretty much predictable.

Yunus Sajawal has managed to pen a story so simple that you wonder why and when we became slaves to intricate plots and multifaceted characters. This is a story of good versus evil, and black-and-white characters. The hero is human, the villain is a demon. And every other character in the movie takes clear sides.

Set in Maharashtra and Goa, this remake of the Tamil Singham (directed by Hari, and starring Suriya) will strike a chord with the Marathi manoos. Dialogues are liberally peppered with Marathi sentences, and the supporting cast boasts of some stellar names from the Marathi stage and film fraternity.

Anant Jog as the wily politician does a fine job, and manages to overshadow the other Marathi greats, including Govind Namdeo and Sachin Khedekar. Khedekar's role as a comical father is slightly overdone, but it showcases the artiste's versatility.

Rohit Shetty and Ajay Devgn go back to their roots (action movies) in Singham. Known for his love of jaw-dropping stunts, Shetty takes the action one notch higher, and does not disappoint. Some action sequences, in fact, are not even believable, like the one in which Devgn reaches out to a man inside a car in the air and pulls him out before the car crashes to the ground.

The actor has obviously worked on his body a bit, and looks about 10 years younger. He does justice to his role, with sincerity. The comparison with Dabangg is unnecessary - both Salman Khan and Ajay Devgn wear police uniforms, but that is about all.

Kajal Aggarwal plays the romantic interest, and has a few spunky lines, but Singham is not her ideal Bollywood debut. She leaves her mark, though, knowing when to shine, and when to take a backseat.

Prakash Raj, who played the bad guy in the Tamil version, reprises his role as the menacing villain. The part is a cakewalk for him. However, despite his obvious talent, his roles in the Hindi film industry have become somewhat repetitive - he threatens, then plays the clown, then becomes a paranoid coward, only to become menacing all over again.

The title song reminds you of 'Omkara', but it stays in your head for a while. The other songs are average, and may become more popular with the release of the movie. Dudley's cinematography is admirable, especially in the action sequences.

Singham is, in the words of Amitabh Bachchan, the original angry young man, "Going to be big! Especially in Maharashtra..."
Share. Save. Connect.
Tweet
SINGHAM SNAPSHOT

ADVERTISEMENT
This page was tagged for
Singham hindi movie
Singham reviews
release date
Ajay Devgn, Kajal Aggarwal
theatres list
Follow @fullhyderabad
Follow fullhyd.com on
About Hyderabad
The Hyderabad Community
Improve fullhyd.com
More
Our Other Local Guides
Our other sites
© Copyright 1999-2009 LRR Technologies (Hyderabad), Pvt Ltd. All rights reserved. fullhyd, fullhyderabad, Welcome To The Neighbourhood are trademarks of LRR Technologies (Hyderabad) Pvt Ltd. The textual, graphic, audio and audiovisual material in this site is protected by copyright law. You may not copy, distribute, or use this material except as necessary for your personal, non-commercial use. Any trademarks are the properties of their respective owners. More on Hyderabad, India. Jobs in Hyderabad.