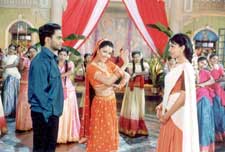 Arpan Panicker / fullhyd.com
EDITOR RATING
5.0
Performances
Script
Music/Soundtrack
Visuals
NA
NA
NA
NA
Suggestions
Can watch again
NA
Good for kids
NA
Good for dates
NA
Wait to rent it
NA
The title of the flick means "Why the silence?" And the director takes it rather too seriously - for, this flick is a 3-hour long silent interlude. The silence is punctuated with comic scenes and sometimes with Ramana Goggula's songs - and worse, his voice! But there will follow one whole paragraph discussing his music, so we shall leave him alone for the moment.

The movie introduces two newcomers, Sachin and Sampada. Sachin looks cute when he tries to smile, and constipated when he doesn't. And considering his attempts at smiling don't account for much time, that constipated look kinda gets on your nerves. This guy couldn't act to save his soul.

Sampada is gorgeous. With an incredible bone structure and a really cute smile, she drew whistles from the crowd when she appears for the first time. A newcomer clad in a decent, white salwar-kameez drawing whistles is definitely a novelty. But then followed her attempts at acting. Looking like a mentally retarded kid in a school rendition of Cinderella, she pouted and sighed in a thoroughly juvenile fashion, and the spell was broken.

I guess I'll let you have the story before I move on to that paragraph about Ramana Goggula.

Bobby (Sachin) is a lost cause. He is good looking and popular and owns a dream of a bike, and all he does is drop old ladies at bus stops to their destinations. And he hangs around all day with a gang of very irritating friends - all guys. The gang is invited to a wedding in Rajahmundry, and they all leave for 10 days of rural bliss.

Rajahmundry station. Bobby sees Mounika (Sampada), and falls in love. Then she wafts away, and he is left holding a 5-rupee coin she dropped. Not to worry - in true filmi style, she turns out to be the groom's cousin. Not that the guy was planning on doing anything, anyway. He just goes on to reduce pining to a fine art. She too falls for him after some time, and they pine together - looking doe-eyed at each other, sighing in isolation and all that jazz!

The family scenes are built well around these pining sequences, and the whole movie passes from one missed opportunity of confessing love to another. Finally the girl's marriage is arranged elsewhere, and the pining gets all teary now. Last scene: two trains drawing away in opposite directions, and this time the girl sprinting from one train to another. She makes it and breaks the interminable silence with the three so-called golden words. Apart from those words, they don't speak to each other throughout the movie!

The direction is decent enough as the movie manages to pull through despite the maddening silence. Some picturesque shots of Rajahmundry's locales, helped along by a single flash-in-the-pan tune, help build a nice ambience.

NOW for that guy who thinks he composed the 'music' for this movie. Except for the main theme music, which is suitably haunting and melodious, he has just manufactured sound that makes words like jarring, grating, intolerable et al look complimentary. And he insists on singing, too! Oh the folly! There was a shooting-star-wishing sequence in the movie. My wish came true. There were no more songs in the movie after that!

Those who like mush of the mushiest sort may just like this one, though it's probably made me a diabetic for life. But if you are going, take earmuffs along. Especially for the songs. Not like there are any dialogues you'll miss!
Share. Save. Connect.
Tweet
MOUNAMELANOYI SNAPSHOT

ADVERTISEMENT
This page was tagged for
mounamelanoyi xnxx naa vid songs
mounamelanoyi full hd movie download
mounamelanoyi heroin
mounamelanoyi movie download
mouna mela noyi full movie download
Follow @fullhyderabad
Follow fullhyd.com on
About Hyderabad
The Hyderabad Community
Improve fullhyd.com
More
Our Other Local Guides
Our other sites
© Copyright 1999-2009 LRR Technologies (Hyderabad), Pvt Ltd. All rights reserved. fullhyd, fullhyderabad, Welcome To The Neighbourhood are trademarks of LRR Technologies (Hyderabad) Pvt Ltd. The textual, graphic, audio and audiovisual material in this site is protected by copyright law. You may not copy, distribute, or use this material except as necessary for your personal, non-commercial use. Any trademarks are the properties of their respective owners. More on Hyderabad, India. Jobs in Hyderabad.