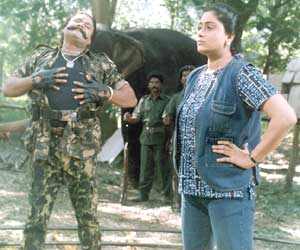 Smriti Kashyap / fullhyd.com
EDITOR RATING
1.0
Performances
Script
Music/Soundtrack
Visuals
NA
NA
NA
NA
Suggestions
Can watch again
NA
Good for kids
NA
Good for dates
NA
Wait for OTT
NA
Supa-cop Vijayashanthi in and as Saahasa Veerudu, Vichitra Kothi. Don't ask me how, I just read out the posters aloud. With a double whammy like that, you know old VS can't go wrong. Made on a budget as large as a finger nail, SVVK is one of those flicks that doesn't pose any apparent threat to smaller independent productions like K3G or Devdas.

VS plays an independent, kick-butt forest officer who designs and wears her own version of the uniform. Made in the latest prêt-a-porter style, the spring-summer version of her uniform includes wearing a T-shirt over which a khaki shirt is draped casually keeping the first 100 buttons open till the waist, and of course, a police belt buckled shoddily over the waist giving the uniform a distinct Bohemian, anti-Veerappan look.

Swinging in the jungles and hanging from forest vines clearly buckling under her weight, she battles ferociously all the evil smugglers and poachers of elephant tusks (made of valuable plaster of Paris).

Back home in yonder civilization lives her family (the same one which left her in the forest) that includes her sis, sis's hubby (Sarat Babu) and over-precocious child Vikaas. This Vikaas guy, in a moment of sheer over-smartness that in any other occasion would have fetched him a smart rap across his face, manages to save a bus full of kids from being kidnapped. For this act, he gets a 'Saahasa Baaludu' award.

Saahasa baaludu later on sees and unlocks a chimp's cage door during a trip to the zoo, leading to the vichitra kothi part. Not as spunky as Dunston, this dumb chimp follows the dumb kid around. He finally sets the bandar free in a forest in a moment of blinding intelligence. And when Vikaas later gets shoved down a mountain by his scheming uncles during a forest trip with his aunt, he gets lost in the jungle, and this is when the chimp comes to the rescue.

Yaawn. That's about this flick. The last time I saw a decent child actor was way back in 1902 - Kishore Kumar in Chalti Ka Naam Gaadi (this is going to pull in a few angry responses, to which I say, hee hee!). The kid in the movie does a fairly decent job of hanging a pair of binoculars over his neck and bawling continuously. VS is as dynamic as ever, steadily increasing in size and stature. She goes about her role with an ease that comes from doing a million cop movies each week.

Supposedly a summer movie for the kids, the only kid I saw in the halls was moi, and that's because I'm mentally immature. If you want to see a movie that seems to be shot in sub-Saharan Andhra with snakes, a porcupine, one vulture and one fast balding chimp, then this flick is right up your valley... er, alley!
Share. Save. Connect.
Tweet
SAHASA BAALUDU VICHITRA KOTHI SNAPSHOT

ADVERTISEMENT
This page was tagged for
SAHASABALUDVICHITRAKOTHINAASONGSTELUGUDOWNLOAD
Sahasa baludu vichtra koti songe download
Sahasa balludu vichtra koti songe download
sahasa baludu vichitra kothi mp3naa
sahasa baludu vichitra kothi move mp3 songs
Follow @fullhyderabad
Follow fullhyd.com on
About Hyderabad
The Hyderabad Community
Improve fullhyd.com
More
Our Other Local Guides
Our other sites
© Copyright 1999-2009 LRR Technologies (Hyderabad), Pvt Ltd. All rights reserved. fullhyd, fullhyderabad, Welcome To The Neighbourhood are trademarks of LRR Technologies (Hyderabad) Pvt Ltd. The textual, graphic, audio and audiovisual material in this site is protected by copyright law. You may not copy, distribute, or use this material except as necessary for your personal, non-commercial use. Any trademarks are the properties of their respective owners. More on Hyderabad, India. Jobs in Hyderabad.