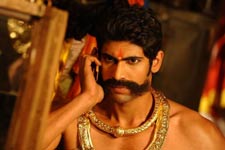 Deepa Garimella / fullhyd.com
EDITOR RATING
7.0
Performances
Script
Music/Soundtrack
Visuals
7.5
6.0
8.0
7.0
Suggestions
Can watch again
No
Good for kids
No
Good for dates
Yes
Wait to rent it
No
Mythology must have been invented to shield the human race from the harsh truth that justice is a myth.

People need to listen to stories of good winning over evil, accounts of muscled handsome gods taking on pathologically evil asuras in fights of extreme skill; people need to watch the beefy hero kill the bad guys all by himself.

Because in real life, the guy who steals Rs. 1 lakh crores, wipes out hundreds of hectares of forest land and renders thousands of people homeless is, well, the guy who smiles at you from the front pages of newspapers until he dies of natural causes. No warrior confronts him, no crowd lynches him, no past catches up with him.

No point, then, in carping about how Krish, the rather acclaimed writer-director who gave us mostly unadulterated socially-conscious films - this and this - has now chosen to peddle a movie rather than launch a social commentary.

Krishnam Vande Jagadgurum (KVJ) deals with the weighty issue of Bellary's illegal mining. Anyone clued into the buzz surrounding the movie also knows that KVJ is a tribute to Surabhi, the 125-year-old theatre group that is well-known for its Telugu mythological plays. KVJ, then, tries to use symbolism and mythology to lace its story of good vs evil.

Surabhi takes centre-stage here, as RaNa Daggubati plays Babu, an artiste from the troupe. Babu's guardian Subrahmaniam (Kota Srinivasa Rao) is a Surabhi veteran, and has a rare conviction in the reforming power of art. Babu, however, sees nothing attractive about the dying art form of theatre ("chappatlu... vinataniki bauntayi kaani thinataniki kadu..."), and because he's young and qualified to be an engineer, wants to fly abroad for a more lucrative career.

The drama company has its roots in Bellary, a land which has seen a disturbing transformation from times gone by - forests and farmlands have disappeared, farmers are left hungry, soil and water are contaminated, and people "breathe iron dust".

Surabhi's artistes decide to go to Bellary to perform one last time, and this is when the troupe runs into the incredibly heinous mining mafia there - as well as Babu's past.

Using theatre and mythology as a backdrop was a fine idea, but really, KVJ's two biggest strengths are its dialogues and its background score. The lines in the on-stage dramas themselves have symbolism, but the other dialogues written are exceptionally brilliant - and boy, does Krish have a clever sense of humour. Rarely do you watch a conversation pass by without it having something for you to think about and applaud.

There are scenes and characters that strike you as masterfully conceived, for example, the one played by L B Sriram (he plays a deeply disturbed Bellary farmer who is always seen digging away and "storing" earth because he wants to protect it from being stolen).

Also, Posani - who'd have thought he would be such a delight to watch? In the role of a cab driver called Tipu, he's pretty darn entertaining.

But look a little closer and you realize that this concept of using theatre artistes to form a narrative accompanying the main - ironically, the one thing that sets KVJ apart from, say, a V V Vinayak film - clutters the picture. The fight between good and evil here involves merely muscle power, guns and gore. In the end, justice is indeed delivered. But where is the social critique, where are the insights, where are the goddamn real solutions? Scenes from Pataala Bhairavi and the Mahabharata sometimes serve the purpose, but sometimes it's easy to miss the symbolism. Then again, you might not care.

There is also a filmi tendency to portray "extreme" evil; cutting off tongues, peeing on sacred ash etc. The gore is not family material. In any case, this is an intense film, one that you cannot choose if you want to let your hair down at the cinemas.

All the actors show immense conviction. For RaNa, this is a big role, irrespective of how the film does at the box office. This isn't an emotion-packed role, so he does just fine, but he still doesn't have it in him to pull off philosophical moments.

Something doesn't quite click between him and Nayantara. The lady does as good a job as any actress possibly can when playing a journo whose white shirt and sky-blue jacket remain unruffled and unsoiled despite her traversing Bellary's dusty tracts of land for days on end.

The comedy involving Brahmanandam is quite well-scripted. Raghu Babu, Satyam Rajesh and Hema are good.
Milind Gunaji as Reddappa, and Murli Sharma, too, have pivotal roles.

The background score is probably more powerful than RaNa in taking the lead and setting the film's tone. The songs are mostly distractions, though. Since this is a commercial film and all that, you also have skimpily-dressed women dancing in ill-placed dance numbers.

Costumes are perfect, the cinematography is good, and the film feels like a thoughtfully put together product.

There's much more to KVJ than Sameera Reddy and 2 minutes of Venkatesh, but don't expect it to end world hunger, and you'll do just fine.
Share. Save. Connect.
Tweet
KRISHNAM VANDE JAGADGURUM SNAPSHOT 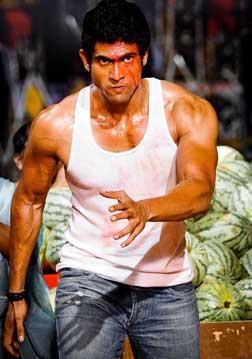 See Krishnam Vande Jagadgurum full details
TOP COMMENT
Mahesh on 2nd Dec 2012, 10:51am | Permalink
Kvj yesday ngt I hav seen...gud story spoiled by a bad screenplay...I dont understand how can a protagonist shakes leg with a hip beauty in a dazzling set.., which is the very next scene after he ows to kill the person who pisses on his grandfathers burnt ashes...all songs r wrongly timed...didnt allow emotions to develop in crux situations...a thought provoking dialogue once in a while really makes us think...but in this movie such dialogues r run continuously in every conversation which leave ur brain battered...saving graces r climax, good costumes n makeup in stage plays, R.R...overall it remains another average movie which was spoiled by a bad screenplay in an attempt to commercialize it...
7
0
USER RATING
5.0
KRISHNAM VANDE JAGADGURUM USER REVIEWS
1 - 7 OF 7 COMMENTS
POSITIVE  |  NEGATIVE |  NEWEST  |  OLDEST  |  MOST HELPFUL  |  LEAST HELPFUL
USER RATING
7.5
2 USERS
Performances
Script
Music/Soundtrack
Visuals
NA
NA
NA
NA
Can watch again - NA
Good for kids - NA
Good for dates - NA
Wait to rent it - NA
reviews rangarao on 10th Dec 2012, 11:07pm | Permalink
Weak Screenplay spoiled the whole plot.

Rana as well as Nayanatara are at their best.

even though 2 mints character Mental Krishna's comedy is good.

should encourage director for his feel towards society through his movies. Very rarely we will get such kind of persons apart from the commercial movies.
Mallanna on 2nd Dec 2012, 8:01pm | Permalink
KVJ: Using theatre and mythology as a backdrop was a fine idea?
Rang De Basanti: Documentary or Film and Struggle for Independece as backdrop.
Is KVJ a rehash of RDB?
Mahesh on 2nd Dec 2012, 10:51am | Permalink
Kvj yesday ngt I hav seen...gud story spoiled by a bad screenplay...I dont understand how can a protagonist shakes leg with a hip beauty in a dazzling set.., which is the very next scene after he ows to kill the person who pisses on his grandfathers burnt ashes...all songs r wrongly timed...didnt allow emotions to develop in crux situations...a thought provoking dialogue once in a while really makes us think...but in this movie such dialogues r run continuously in every conversation which leave ur brain battered...saving graces r climax, good costumes n makeup in stage plays, R.R...overall it remains another average movie which was spoiled by a bad screenplay in an attempt to commercialize it...
RATING
5
Mahesh on 1st Dec 2012, 3:40pm | Permalink
Hey deepa garimella...if u want to comment on YSR...do it openly...dont take this movie review as a cover to comment on him like a cover....ur pious beliefs about him r a big hoax generated by yellow media or they may be bcoz of ur caste blindness...before u comment about YSRs heartly laugh u better look at mirror n see how many days elapsed aftr u last healthy laugh...if u want to write a review jst write it...dont make unnecessary comments on such leaders...
GOD on 1st Dec 2012, 4:23pm | Permalink
Mahesh; i can feel your choler but that doesn't mean "yellow page media" is built to write crap... Just hope u know the amount of research and pain that ppl go through while putting news together... i am sure u are not so closely related or even have the maturity to judge the right and wrong that the mentioned gentleman has done and convicted.

Good to have you back. was wondering if you moved out this job ..as last couple of new releases were reviewed by someone else..

ADVERTISEMENT
This page was tagged for
Krishnam Vande Jagadgurum telugu movie
Krishnam Vande Jagadgurum reviews
release date
Rana Daggubati, Nayantara
theatres list
Follow @fullhyderabad
Follow fullhyd.com on
About Hyderabad
The Hyderabad Community
Improve fullhyd.com
More
Our Other Local Guides
Our other sites
© Copyright 1999-2009 LRR Technologies (Hyderabad), Pvt Ltd. All rights reserved. fullhyd, fullhyderabad, Welcome To The Neighbourhood are trademarks of LRR Technologies (Hyderabad) Pvt Ltd. The textual, graphic, audio and audiovisual material in this site is protected by copyright law. You may not copy, distribute, or use this material except as necessary for your personal, non-commercial use. Any trademarks are the properties of their respective owners. More on Hyderabad, India. Jobs in Hyderabad.