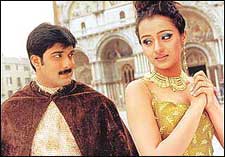 Greetings earthlings! Even though we're the strongest beings in the universe, we always study the dwellers before invading a planet. So here I am, checking out earthlings before we wipe them out and take over the planet. By the way, this looks like a place where earthlings congregate for activities. There are seats everywhere and a huge screen in front. Oh, got to disguise myself now, here come the earthlings.

The earthlings in the next seat look like male species - facial hair and smelly. Our odor bomb will never kill them. And they are masticating upon a green substance identified as tobacco leaves. Oh, what are the doing now? Spitting foul things from their mouths? Liquid missiles! Earth is not going to be a pushover as I thought.

The lights have gone out and everyone's looking at the giant screen in expectation. Bang! What's all this loud noise? I think I have come to some sort of a torture chamber... but wait. The earthlings seem to revel in these conditions. They're whistling and clapping happily. This is so not good for us. And then the movie begins...

There's a man (Tarun) and a woman (Trisha) meeting each other in one of those highly dangerous modes of transportation of humans - a train. They seem to like each other but they part ways as soon as they hit their destination. Once in the city, Tarun realizes that he has fallen in love with that girl. Similarly does the girl realize her love for Tarun. Thus starts the search for each other in the big city.

To help them are present some very strange unidentified beings. They seem to be friends of Tarun and Trisha. First I thought hey, there's someone from my planet, but one close look and I decided they don't belong to this Milky Way. Anyway, after a long search, Tarun and Trisha are about to meet, when the interval sign appeared.

Occasionally, the lead humans behaved as if they knew who I was. It looked like they're warning me. A ritual war dance with lots of noise and unique pelvic movements. Oh God, it was so frightening. Got to inform the mother-ship about it. Then the footage on the screen reappeared and the earthlings got immersed again.

Tarun and Trisha finally meet, but they've gone through a lot. So when they actually meet, they think that the other doesn't remember the encounter in the train at all. So Tarun packs off to America and Trisha to Mumbai. But eventually in the end, they get back together.

There were quite a few things to note from this footage. Earthlings are very versatile in showing their emotions. Even if some people on the screen seemed emotionless, the earthlings all around seem to understand. Judging by the reaction all around, they seemed to have known the story and the ending before hand. They thought it was pretty clichéd. My God! Earthlings are psychic as well. Special note: do not kill an earthling named Shriya who plays Tarun's friend, an insignificant role in this show. Abduct her and with those creamy arms {censored}.

These earthlings are certainly strong (not to mention creamy). Our ultra-sound killer bomb is a joke compared to the kind of noise (music they call it) this show has. Apparently, it was composed by a great musician, too - scary.

ADVERTISEMENT
This page was tagged for
nee manasu naku telusu movie imdb rating
Nee Manasu Naaku Telusu telugu movie
Nee Manasu Naaku Telusu reviews
release date
Tarun, Trisha
Follow @fullhyderabad
Follow fullhyd.com on
About Hyderabad
The Hyderabad Community
Improve fullhyd.com
More
Our Other Local Guides
Our other sites
© Copyright 1999-2009 LRR Technologies (Hyderabad), Pvt Ltd. All rights reserved. fullhyd, fullhyderabad, Welcome To The Neighbourhood are trademarks of LRR Technologies (Hyderabad) Pvt Ltd. The textual, graphic, audio and audiovisual material in this site is protected by copyright law. You may not copy, distribute, or use this material except as necessary for your personal, non-commercial use. Any trademarks are the properties of their respective owners. More on Hyderabad, India. Jobs in Hyderabad.