Catch Me If You Can Review

We know Steven Spielberg loves to pay attention to every detail of his film, but what in the Lord's name is the matter with the opening credit rolls of Catch Me If You Can? Shucks man, that has to be the fussiest opening sequence ever. Don't take my word for it, it's perfectly creative - but also so fussy! Anyway, if it's any consolation, it is also one of the most gripping films that we've seen in a really long time.

It's an unusually seemingly happy family that Frank Abganale Jr. (Leonardo DiCaprio) inhabits. Till the shit hits the fan and his parents file for divorce. 16-year-old Frank, not wanting to make the desperate choice of choosing between which parent he'd have to live with, sprints away from home. 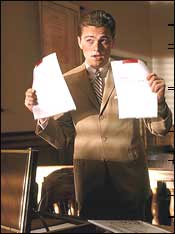 Out of moolah, moping and morose, Frank does what comes naturally to him... he begins to forge cheques. And as the film progresses, this teen wonder manages to con, hoodwink, filkflam, grin and sleep his way through some of the most ingenious cons pulled off in history, and manages to stash away more than 4 cool million dollars.

Hot on his pinky is Carl Hanratty (Tom Hanks). Easily one of the bigger cases in his lifetime, he sniffs down and begins to track Frankie's trail. Phantasgomoric at most times, he almost pins him down only to find a whiff of smoke where the con-boy once was. And the film moves along, breezing at an easy pace as Tom Hanks manage to corner Frank only to keep losing him.

Catch Me... is one of the coolest period flicks in a really long time. It's great fun looking at stuff from a different era and then snickering that this is the sort of 'period' your folks inhabited once-upon-a-stupid-time. There isn't really much to nit-pick about this film. Everything seems to blend in so seamlessly.

Leo DiCaprio moves away from his over the edge Titanic type tripe and is perfectly cast as the Boy Forge Wonder. Easily striking the right balance between cocky and disarmingly naïve, he plays along as the coolest con man this side of Cincinnati. Tom Hanks, of course, is Tom Hanks is of course Tom Hanks... So!! Christopher Walken as Frank Sr. is superbly cast, and pulls off his role with aplomb.

The film scores on several points... for the discerning viewer, plenty of subtle undercurrents of emotion, some loneliness, some pure confusion, and the rest of the jingbang. Technically sound too, the flick has something for every music buff with a fabulous background score - any takers for Sinatra would absolutely love it! The movie boasts of a sound script, some tight production and flawless execution, though it might be a tad slow for some tastes.
Share. Save. Connect.
Tweet
CATCH ME IF YOU... SNAPSHOT
CATCH ME IF YOU CAN SNAPSHOT
See Catch Me If You Can full details
CATCH ME IF YOU... USER REVIEWS
CATCH ME IF YOU CAN USER REVIEWS
1 - 7 OF 7 COMMENTS
POSITIVE  |  NEGATIVE |  NEWEST  |  OLDEST  |  MOST HELPFUL  |  LEAST HELPFUL
USER RATING
8.0
26 USERS
Performances
Script
Music/Soundtrack
Visuals
NA
NA
NA
NA
Can watch again - NA
Good for kids - NA
Good for dates - NA
Wait to rent it - NA
Occasional Critic on 16th May 2003, 6:27pm | Permalink
Hey Jaszalcatraz, Personally I don't think Spielberg is a great director. Except for ET and Schindler's list , There isn't much in his portfolio. Hanks is no big deal either. Let's just say that he got lucky with those oscars and I think he was grossly miscast in CMIYC. I expect perfection when I walk into a movie made by Kurosawa / Kubrick / Renoir / Hitchcock / Wilder. Definitely not Spielberg.
RATING
4
Jaszalcatraz on 15th May 2003, 10:26am | Permalink
It's funny how people walking into a Spielberg film expect perfection, or expect a pathbreaking performance from Hanks in every role....So Ocassional Critic...I show dissent to your negative comment on Hanks....atleast he isn't doing no-brainers like Cast Away. I agree with your non-linear time idea though, I guess Spielberg wanted to (for lack of better words) "show off". Walken, I thought was the best thing about the movie, you can watch him financially and personaly changing in every scene.
I would like to add, that after
"heavy future movies " like AI and Minority Report, it's nice to see a fun Spielberg movie set in the past. An enjoyable 2 hours in the dark.

ADVERTISEMENT
This page was tagged for
Catch Me If You Can english movie
Catch Me If You Can reviews
release date
Leonardo DiCaprio, Tom Hanks
theatres list
Follow @fullhyderabad
Follow fullhyd.com on
About Hyderabad
The Hyderabad Community
Improve fullhyd.com
More
Our Other Local Guides
Our other sites
© Copyright 1999-2009 LRR Technologies (Hyderabad), Pvt Ltd. All rights reserved. fullhyd, fullhyderabad, Welcome To The Neighbourhood are trademarks of LRR Technologies (Hyderabad) Pvt Ltd. The textual, graphic, audio and audiovisual material in this site is protected by copyright law. You may not copy, distribute, or use this material except as necessary for your personal, non-commercial use. Any trademarks are the properties of their respective owners. More on Hyderabad, India. Jobs in Hyderabad.