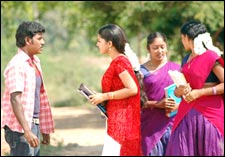 Krishna KBS / fullhyd.com
EDITOR RATING
2.0
Performances
Script
Music/Soundtrack
Visuals
4.0
2.0
2.0
3.0
Suggestions
Can watch again
No
Good for kids
No
Good for dates
No
Wait for OTT
No
Parthu is an attempt at making a commercially viable mass film. However, the film remains just an attempt, as the director ends up making a movie that banks too heavily on pathos and drags endlessly like a soap opera on television.

Parthu (Lawrence) is the younger son of Seetaramayya (Nasser) and Jankamma (Saranya). In full sync with the way the hero's character is designed in these kinds of films, the director characterises him as a good-for-nothing guy, with a heart of gold.

Parthu's father and siblings loathe him, as they consider him to be a burden; and frankly, in the first half of the movie, he IS a burden - not only for the father but also the viewer because of his incessant hamming. However, his mother dotes on him, and the neighbourhood folk love him for his good nature.

Our hero soon meets his girl (Sneha) while attempting a foolish act of bravado for the sake of his locality, and after a song and dance in an inebriated state, they fall in love with each other.

The movie has its first twist (there are quite a few in this movie, though none of them is expected or even warranted) when Parthu's sister's marriage is fixed. His brother runs away with the money that is kept for the marriage, and Parthu comes to the rescue by borrowing money from anyone and everyone who is willing to lend. As a result of this, his father too starts doting on him.

However, Parthu has to leave for Dubai, leaving behind his newly-wed wife and family, to earn the money to pay off the debt. While he is in Dubai, some goons who have an enmity with his father kill his mother. The movie ends in the way all films do, or at least all mass films do - with the hero having his revenge.

Parthu tries to bank on the audience's sympathy. However, any sympathy that the viewer has is directed towards himself - for sitting through this mess of a film. Every scene drags, and the less said about the screenplay the better. The music is ho-hum, and the camera work and editing cannot obscure the fact that the film is made from a script on which the creative team must have spent about an hour.

Lawrence has a long way to go before he can presume he can carry a film single-handedly. His acting is decidedly amateurish, mainly thanks to the overaction. Sneha looks rather uncomfortable, and Namitha has nothing to show except her body. Nasser and the others sleepwalk through their roles.

Basically, this is a movie for Tamilians in Andhra who are feeling nostalgic for their homeland and movies, if they can settle for a dubbed version. Stay at home, unless you want to watch something hardly worthy of the idiot box, on the silver screen.
Share. Save. Connect.
Tweet
PARTHU SNAPSHOT

ADVERTISEMENT
This page was tagged for
www paarthu telugu movie wikipedia.com
parthu lawrence reviww
parthu movie in telugu
Parthu telugu movie
Parthu reviews
Follow @fullhyderabad
Follow fullhyd.com on
About Hyderabad
The Hyderabad Community
Improve fullhyd.com
More
Our Other Local Guides
Our other sites
© Copyright 1999-2009 LRR Technologies (Hyderabad), Pvt Ltd. All rights reserved. fullhyd, fullhyderabad, Welcome To The Neighbourhood are trademarks of LRR Technologies (Hyderabad) Pvt Ltd. The textual, graphic, audio and audiovisual material in this site is protected by copyright law. You may not copy, distribute, or use this material except as necessary for your personal, non-commercial use. Any trademarks are the properties of their respective owners. More on Hyderabad, India. Jobs in Hyderabad.