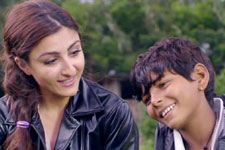 Kritika Deval / fullhyd.com
EDITOR RATING
4.0
Performances
Script
Music/Soundtrack
Visuals
5.5
3.0
6.0
5.0
Suggestions
Can watch again
No
Good for kids
No
Good for dates
No
Wait for OTT
No
A movie set in the Hindi hinterlands about redeeming young boys who a harsh life turns into hardened sharpshooting criminals. Oh, wow! Is it yesterday already? And how come Bollywood doesn't care about poor people out here? And how wonderful that this argument is exactly as meaningful and purposeful as the entirety of Chaarfutiya Chokare?

Incidentally, the only true difference between this movie and Desi Kattey, this writer's other project for the same weekend, happens to be that CC (much easier to think, isn't it?) has three young male protagonists in it while the latter has only two. Also, CC's protagonists stay teenagers throughout the film in body and in mind, while Desi Kattey's "heroes" do grow up at least body-wise. Oh, wait, we found another. CC wants very hard to be thought of as a seeerious, while the latter doesn't even try.

It is a good thing, too. Chaarfutiya Chokare is chockfull of seeerious doing seeeriousthings in seeeriousplaces. But none of it ever gets you feeling seeerious unless, in the above sentence, seeerious = bored right out of your mind.

Neha Malini (Soha Ali Khan) is a US-returnee who works for an NGO that apparently hates her, or is too stingy to shell out for more workers. We can surmise this because they send her, alone, to a village in rural Bihar, to deal with local political entities and set up a school. We're going with the NGO just plain hating her.

So, anyway, once at the village, she gets up to all the usual rural hijinks involving chaarfutiya chokare-turned-murderers, rampant illiteracy, political corruption, underage marriages, child flesh trade and rape. There is probably a point to all of this, but it never seems to go beyond "poor people are people, too, and bad things happening to them is bad, and everybody just be nice to Soha she's a sweetheart!"

The whole story is told in a way that makes the government-sponsored anti-smoking ads screened right before this movie seem downright entertaining. At least they made us laugh, albeit unintentionally.

We get it. Chaarfutiye Chokare is supposed to be an issues film. But unless you are the government and are screening something like this for free, you shouldn't be allowed to ignore your craft and your medium and expect us to focus on the message (which is also lackluster).

Soha Ali Khan seems exactly as out of place as she is meant to, and hams her way throughout her cardboard-cutout of a savior role. Harsh Mayar, Shankar Mandal and Aditya Jitu have fun with their roles with Harsh showing quite a bit of promise. Zakir Hussain, Seema Biswas and the rest are thoroughly underutilized in a film that seems to have gathered all these amazing talents but later forgot what to do with them.

The cinematography and the music match the tone of the rest of the film, in that they are all just as superficial, factory-produced and unexciting.

All in all, we get that the title, the premise and the trailers might get you all excited about a seeerious movie that you can really sink your teeth into. Don't give in. Chaarfutiya Chokare is not worth the effort it takes for you to wade through maze-like multiplexes to get to 150-buck seats, or the fortitude it takes to sit through 2 hours of tedium while you kick yourself (hopefully physically) for having wasted money on popcorn that costs more than your ticket.
Share. Save. Connect.
Tweet
CHAARFUTIYA CHHOKARE SNAPSHOT 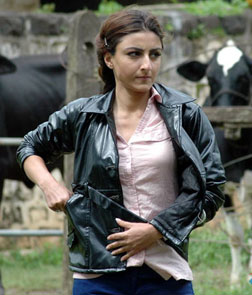 ADVERTISEMENT
This page was tagged for
Chaarfutiya Chhokare hindi movie
Chaarfutiya Chhokare reviews
release date
Soha Ali Khan, Harsh Mayar
theatres list
Follow @fullhyderabad
Follow fullhyd.com on
About Hyderabad
The Hyderabad Community
Improve fullhyd.com
More
Our Other Local Guides
Our other sites
© Copyright 1999-2009 LRR Technologies (Hyderabad), Pvt Ltd. All rights reserved. fullhyd, fullhyderabad, Welcome To The Neighbourhood are trademarks of LRR Technologies (Hyderabad) Pvt Ltd. The textual, graphic, audio and audiovisual material in this site is protected by copyright law. You may not copy, distribute, or use this material except as necessary for your personal, non-commercial use. Any trademarks are the properties of their respective owners. More on Hyderabad, India. Jobs in Hyderabad.