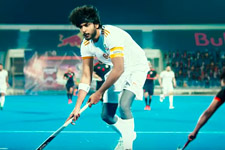 Anil Bandhakavi / fullhyd.com
EDITOR RATING
6.0
Performances
Script
Music/Soundtrack
Visuals
6.0
5.0
5.0
6.0
Suggestions
Can watch again
No
Good for kids
Yes
Good for dates
Yes
Wait for OTT
No
A movie about sports can be a tad bit risky. If the drama fails to surface well, you now have a fake sporting match to witness for a couple of hours - you're better off watching a bunch of teenage kids throw bet money on a game of cricket at one of the city's many college grounds. But A1 Express, directed by Dennis Jeevan Konukolanu, mixes sport and drama quite skillfully in delivering the desired product. The only issue is that the film, in the end, feels like just that - a product.

Sundeep Naidu (Sundeep Kishan), affectionately referred to as Sanju, is back in his hometown of Yanam. He's a go-getter by nature and pursues Lavanya (Lavanya Tripathi) who's a star on the Chittibabu Hockey Ground's women's team. Beyond Sundeep's happy-go-lucky life, politicians are trying to work out a backroom deal to dissolve hockey activities at Chittibabu Grounds and prepare the land for a huge construction project.

Owing to this year's poor performance of the team, the ground has been relegated to "underperforming" status, which makes it available for other uses, and the Sports Minister favours the move. Murali (Murali Sharma) is the head coach and is determined to save the training ground. He finds himself in a situation similar to one that transpired in the 1950s, when Yanam was under the French, and Chittibabu - a local legend - had to step as an athlete in a hockey game that was organised to decide the fate of the ground.

In order to save the ground, Murali & co are required to register the team as a club and win the qualifier against the local rival - Francis. But to become a club team, they need at least one national-level player on the squad. Well, what do you know? Unbeknownst to the coach and players, Sanju has played on the U-21 Indian national team, which makes him an international player. But a disenchanted Sanju, who's lost friends to corruption and politics in sports, is unwilling to play.

A1 Express is a very average idea that manages to not bore you at any point. It's like showing up in a white t-shirt and blue jeans but getting complimented for the quality of the clothing. Or like the average student who always places at the top of his class because he's a clever test-taker.

The film unfolds in a smooth and seamless manner, without turning into a neurotic mess by getting pumped with too many twists and turns. The storytelling is simple and to the point, and leaves the filmmakers in a good place to focus on getting the feelings across. Instead of being preachy about the issue of corruption in sports and berating politicians, the movie sticks to its fictional plot and cleverly sprinkles a few statements here and there about the "system". Moments of humour, albeit mild, are also neatly packed in at the right points, so they don't seem abrupt or out of place.

Sundeep Naidu owns his role. As the lead in a film in which his character is a leader on the hockey ground, his presence is undeniable but never overbearing. However, there is the extra edge missing in the manliness of his step, which makes it probably enough for star-athlete status on screen, but puts him nowhere near Tollywood alpha material. Lavanya Tripathi, frankly, is just there because courting a female with confidence is the standard litmus test for hero status.

Some of the other strong names in the cast face no problems scoring their goals with minimal effort. Murali Sharma adeptly carries himself on screen as an upright coach with immeasurable wisdom about regulating the competitive spirit. And Rao Ramesh slings his tongue with the reckless arrogance of a money-hungry politician.

What gives A1 Express first-class marks is its technically sound execution of a well-written script. If you want to catch a movie that sucks you in and pops you out the other end feeling entertained, this one does the job. However, there is nothing in this one that warrants a second watch.
Share. Save. Connect.
Tweet
A1 EXPRESS SNAPSHOT 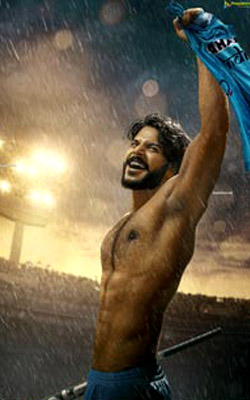 ADVERTISEMENT
This page was tagged for
A1 Express telugu movie
A1 Express reviews
release date
Sundeep Kishan, Lavanya Tripathi
theatres list
Follow @fullhyderabad
Follow fullhyd.com on
About Hyderabad
The Hyderabad Community
Improve fullhyd.com
More
Our Other Local Guides
Our other sites
© Copyright 1999-2009 LRR Technologies (Hyderabad), Pvt Ltd. All rights reserved. fullhyd, fullhyderabad, Welcome To The Neighbourhood are trademarks of LRR Technologies (Hyderabad) Pvt Ltd. The textual, graphic, audio and audiovisual material in this site is protected by copyright law. You may not copy, distribute, or use this material except as necessary for your personal, non-commercial use. Any trademarks are the properties of their respective owners. More on Hyderabad, India. Jobs in Hyderabad.