What has 50 legs but can't walk? Give up? Half a centipede! And what do you get when cross a cock and a dog and some crap? You get cock-a-poodle-poo! Now, what happens when you get bitten by a giant randy arachnid? Well, I'll tell you what doesn't happen. You don't turn into Spiderman-on-steroids! Which totally kills every reason to go watch this inanity of a movie called Eight Legged Freaks. The only savior is the fact that the brain is a wonderful organ - it starts working from the moment you get up and only stops when you walk into the halls.

Oh well, the story, you say? Prosperity is a town that is anything but what its name suggests. Things go for a toss when some all-purpose toxic waste (the sort that can give an elephant diarrhea) is dumped into a water body, and which, like Salman's hair weaver, causes things to mutate.

Some mutated crickets from here are fed to a potty scientist's pet spiders. Munch, munch and POOF! GIANT SPIDERS! Except, pish tosh, been there seen that, zzzzzzzzzzzzzzzzzzzzz. 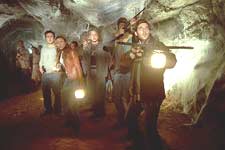 Anyway, these thingies are soon wreaking havoc, and Chris (David Arquette) and his still simmering flame Sheriff Sam (Karri Wuhrer) stack up on their insanities and ammo and try to undo all the havoc that the creepie crawlies are creating. Yea Chris, that cave is dark and mebbe the

spiders are there, but sure, let's go in there anyway! Uh-huh! Is it daft in here or is it just me? 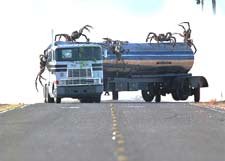 So that's how the rest of the movie unfurls, with some computer-generated spiders all over the place and with as many spooky shots as a Cartoon Network show. The script (or the lack of it), like a hippopotamus trying to hide coyly behind a stalk of grass, tries to take cover behind the imbecility of the lines.

The creep content of this flick is nowhere close to Arachnophobia, which really made your skin crawl. There are couple of moments where you do shoot off your seat, but those moments are few and far between the attacks. Really man, furious activity is no substitute for real story.

David Arquette still continues with his doofus schtick that started off with Scream and seems to continue into every movie of his. Karri Wuhrer on the other hand looks like she's just pressed the 'Down' button on the elevator while she was in the ground floor itself.

There is no such thing as an underestimate of human average intelligence, but this flick stretches things a bit too far. But if you do want to watch loads of hairy legs all over the place, then it is right up for you.

ADVERTISEMENT
This page was tagged for
Eight Legged Freaks Full Movie in Hindi 720p Download
wordfor eight legged freaks download in hindi
Freaks full movie download in hindi
eight legged freaks hindi movie download
eight legged freaks hindi dubbed download
Follow @fullhyderabad
Follow fullhyd.com on
About Hyderabad
The Hyderabad Community
Improve fullhyd.com
More
Our Other Local Guides
Our other sites
© Copyright 1999-2009 LRR Technologies (Hyderabad), Pvt Ltd. All rights reserved. fullhyd, fullhyderabad, Welcome To The Neighbourhood are trademarks of LRR Technologies (Hyderabad) Pvt Ltd. The textual, graphic, audio and audiovisual material in this site is protected by copyright law. You may not copy, distribute, or use this material except as necessary for your personal, non-commercial use. Any trademarks are the properties of their respective owners. More on Hyderabad, India. Jobs in Hyderabad.