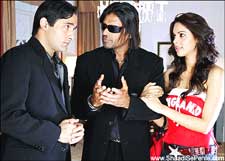 EDITOR RATING
3.0
Performances
Script
Music/Soundtrack
Visuals
NA
NA
NA
NA
Suggestions
Can watch again
NA
Good for kids
NA
Good for dates
NA
Wait for OTT
NA
The world is divided into two kinds of people: those who go to a film to watch Mallika Sherawat’s acting talent, and those who go to watch her take her clothes off. Okay, let’s face it – the world is divided into only one kind of people. And for all of them, Shaadi Se Pehle is a disappointment – Mallika only dresses in bikinis. Bikinis are just formal wear for Mallika as far as the average Indian male is concerned, who wants her to:

a. buy only clothes that are more revealing, and
b. not wear them anyway.

Faced as it is with a very demure Mallika – she doesn’t make love on screen – Shaadi Se Pehle has an uphill task. It has to rely on script, screenplay, performances and such, which we all know are in short supply since they’ve already been used up in other films. So Satish Kaushik (1 hit in 9 movies so far) decides to just do what comes best to him – finish this off and move on to the next film.

Anyway, let’s get to the story. Ashish Khanna (Akshaye Khanna) falls in love with Rani Bhalla (Ayesha Takia) for the main reason that any normal man would fall in love with her, which we refuse to disclose here. Aside of that, she’s strictly a bimbette who cannot count the fingers on her hands and come up with the same number twice.

One day Ashish gets the mistaken notion that he has cancer and will die in less than a year. Now all of us keep feeling like this every once in a while (especially when driving in rush hour on the Ameerpet-Punjagutta stretch), but Ashish decides to actually end his engagement to Rani so that she can marry someone else. He decides that the best way to do that is to make her hate him.

However, Rani is such an airhead, to make her hate you, you have to tell her how to do it in 5 easy steps. After several attempts to piss her off fail, Ashish finally hooks up with Sania (Mallika Sherawat), a ruthlessly materialistic model with the ad agency he works with, and feigns an affair.

Sania originally finds just his butt interesting, but soon starts to really like him since she realizes that he’s so totally unlike her – he is innocent, he has principles, and he wears clothes. She falls in love with him, and declares this to her brother Anna (Suniel Shetty), a mob boss. Anna puts a gun to Ashish’s temple and asks him if he would consider marrying Sania. Ashish finds that an extremely persuasive proposition, and agrees.

Meanwhile, Ashish finds out that he indeed does not have cancer. A whole lot of things change with this, including the showtime – logically, it appears to you, the next show should be happening by now, but this movie simply refuses to end. Anyway, Ashish now wants to get back to Rani, but his rival Rohit (Aftab Shivdasani) has already gotten her to agree to marry him. To find out what happens next, just give us a call – it’s not worth landing up there and paying to find out.

Satish Kaushik tried to make a slapstick comedy, but he went wrong in several things, a partial list of which is reproduced here (for a full list, please send us a DD for Rs. 500, drawn at any branch of any bank where they allow people like you in). First, the script keeps vacillating between drama and comedy, unable to make up its mind what it wants to be – it’s like juggling your time between 2 girlfriends, neither of whom exists. Then, half the jokes are from email forwards – like the pickup line of Ashish for Rani.

Then, the pace of the film makes waiting for your food to get digested seem like an exciting activity. Akshaye is an okay actor, but does not have the comic flair of an Akshay Kumar. Ayesha has nothing to do. What Mallika has to do is, well, clearly defined. Suniel Shetty is fine, too, but Rajpal Yadav’s is the only decent performance.

The music by Himesh Reshammiya has 1-2 decent numbers – a heartbreak song and, of course, Bijuriya. On the whole, this one is a must-avoid, and is for all those who watch must-avoids.
Share. Save. Connect.
Tweet
SHAADI SE PEHLE SNAPSHOT

ADVERTISEMENT
This page was tagged for
Shaadi Se Pehle hindi movie
Shaadi Se Pehle reviews
release date
Akshaye Khanna, Ayesha Takia
theatres list
Follow @fullhyderabad
Follow fullhyd.com on
About Hyderabad
The Hyderabad Community
Improve fullhyd.com
More
Our Other Local Guides
Our other sites
© Copyright 1999-2009 LRR Technologies (Hyderabad), Pvt Ltd. All rights reserved. fullhyd, fullhyderabad, Welcome To The Neighbourhood are trademarks of LRR Technologies (Hyderabad) Pvt Ltd. The textual, graphic, audio and audiovisual material in this site is protected by copyright law. You may not copy, distribute, or use this material except as necessary for your personal, non-commercial use. Any trademarks are the properties of their respective owners. More on Hyderabad, India. Jobs in Hyderabad.