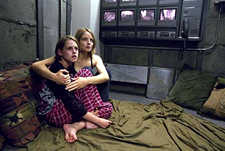 This room has 3 inches of steel around it, surrounded by concrete and all. The provisions inside are enough to last out one of Cromwell's sieges. And the door is huge and ends up mashing up one of the bad guys' extremities. Try cracking this one!

And inside the room are Meg Altman (Jodie Foster) and her daughter Sarah Altman (Kristen Stewart). Why are they in there, you might ask. Well, they checked into this huge house for some arbit reasons, and this house has this room. And three goons, Burrham (Forest Whitaker), Junior (Jared Leto) and Raoul (Dwight Yoakam), break in in an attempt to steal 22 million dollars in cash which is hidden in the house.

Not much of a story here. Just Jodie Foster, Forest Whitaker and the same guy who made a masterpiece called Seven. That is almost enough, considering the brilliance of each of these factors.

The atmosphere builds right from the word go, and the director takes advantage of Meg's claustrophobia to introduce spooky music. Then the thugs break in without much ado. And Burrham is doomed to be the good guy bad guy, 'cos Whitaker is always the good guy, good guy or bad guy. The only time he was REALLY bad was in Battlefield Earth, and look at what he had to do to his face there to get away with the act.

Junior and Raoul are funny in parts, but never really menacing. After a certain amount of time the movie begins to drag. In Seven, the director had the seven deadly sins to play around with. Here he just has one 10 by 10 room.

The movie tries to be a psychological thriller á la Seven, and it tries to relieve the tension with some funny lines here and there. It ends up dangling in between. One of the scenes where Meg shows some spunk has to be the funniest in the movie. I loved it in particular. Junior looks 'hot' in that scene! But sorry Mr. Fincher, right moves, wrong reasons.
Share. Save. Connect.
Tweet
PANIC ROOM (ENGLISH) SNAPSHOT
See Panic Room (English) full details
PANIC ROOM (ENGLISH) USER REVIEWS
1 - 3 OF 3 COMMENTS
POSITIVE  |  NEGATIVE |  NEWEST  |  OLDEST  |  MOST HELPFUL  |  LEAST HELPFUL
USER RATING
9.3
3 USERS
Performances
Script
Music/Soundtrack
Visuals
NA
NA
NA
NA
Can watch again - NA
Good for kids - NA
Good for dates - NA
Wait to rent it - NA
Movie Addict on 28th Jun 2002, 12:08am | Permalink
I agree with camera work in the file. It indeed is excellent. I loved it. People who like crappy telugu movies should avoid this film.
RATING
10
Movie Reviewer on 25th Jun 2002, 12:10pm | Permalink
Hey Arpan, agreed that Panic Room is not as good as Se7en or Fight Club or The Game, but it's still better than 99.99% of junk put out by B/Tollywood in the name of cinema.

Recall a scene at the beginning of the film, where the camera moves from upstairs bedroom, swoops down two floors, zooms into the keyhole, pulls back, and careens upstairs again. Also, the titles at the beginning were ingenious.
Indian directors will have to go through a few stages of evolution to come uo with stuff like this.

Don't get me wrong, hollywood puts out a lot of junk too. But panic room is definitely not in that category.

ADVERTISEMENT
This page was tagged for
Panic Room (English) english movie
Panic Room (English) reviews
release date
Jodie Foster, Kristen Stewart
theatres list
Follow @fullhyderabad
Follow fullhyd.com on
About Hyderabad
The Hyderabad Community
Improve fullhyd.com
More
Our Other Local Guides
Our other sites
© Copyright 1999-2009 LRR Technologies (Hyderabad), Pvt Ltd. All rights reserved. fullhyd, fullhyderabad, Welcome To The Neighbourhood are trademarks of LRR Technologies (Hyderabad) Pvt Ltd. The textual, graphic, audio and audiovisual material in this site is protected by copyright law. You may not copy, distribute, or use this material except as necessary for your personal, non-commercial use. Any trademarks are the properties of their respective owners. More on Hyderabad, India. Jobs in Hyderabad.