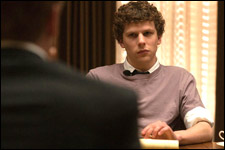 Deepa Garimella / fullhyd.com
EDITOR RATING
7.5
Performances
Script
Music/Soundtrack
Visuals
9.0
8.0
7.0
8.0
Suggestions
Can watch again
Yes
Good for kids
No
Good for dates
Yes
Wait for OTT
No
For the real Mark Zuckerberg, in his current form, there is no such thing as bad press. Any reasonable person will agree that The Social Network shows him in unflattering light. But any reasonable person will also agree that no one cares.

The Social Network is like setting up a chat stall at the Numaaish - it's insanely popular firstly because it is riding on the crest of a social phenomenon, a juggernaut that is now second nature to more than one generation. And serving up yummy snacks is only furthering its cause - the flick does behave like the thriller that it is hyped up to be.

Then, part of the reason the movie is being lapped up is obviously because of its "documentary-value", its tendency to be seen as the definitive "Wikipedia entry" for the Facebook story. Some of the story is fiction, but audiences aren't noticing; they're too busy gobbling up the drama.

The movie begins with how Zuckerberg (Jesse Eisenberg), a shifty-eyed Harvard geek, gets dumped by his girlfriend for being condescending towards her for studying at Boston University, and for being obsessed with getting into an elite Harvard club. He drunkenly vents online, calling her a "bit**" on his blog, and spitefully starting a portal that rates Harvard women on the basis of their hotness.

A social networking site takes form from then on, but Zuckerberg is no originator of the idea. The Winklevoss twins (both played by Armie Hammer) cry foul when they discover he hijacked their concept of a Harvard dating site for which they had initially tried to rope him in.

Zuckerber, however, is on his own monomaniacal trip. He gets his best friend Eduardo Saverin (brilliantly played by Andrew Garfield) to fund his idea be his CFO, and quickly grows to be a campus phenomenon. The story unfolds in a non-linear manner, and we're shown that Zuckerberg is in the middle of two lawsuits, one thrown at him by Eduardo himself.

David Fincher credits the plot to The Accidental Billionaires by journalist Ben Mezrich. Harvard campus experiences and encounters evolve to start-up adventures and entrepreneurial dreams. There's a lot of cinematic liberty taken advantage of, but then, this is a movie and not a textbook on corporate strategy and finance.

Essentially a journey conceived from a heart-break and that ends with several, this one is your typical success biography with a rising star, the underdogs and the patron. However, characters are whole and human, and there are no unreal 2-dimensional people around. You get to root for anyone you like - and probably the best part is that you end up rooting for almost everyone.

Flawless performances, especially by Andrew Garfield and the Jesse Eisenberg (and one un-ignorable job by Justin Timberlake as Napster's founder) are woven into the experience. So is some gripping music and cinematography.

Well, maybe it's the story of your favourite online-thing, or maybe it's "Harry Potter: The Coding Freak, The Harvard Connection & The Billion Dollar Valuation", but The Social Network is, right now, too in-your-face to be missed.
Share. Save. Connect.
Tweet
THE SOCIAL NETWORK SNAPSHOT

ADVERTISEMENT
This page was tagged for
The Social Network english movie
The Social Network reviews
release date
Jesse Eisenberg, Andrew Garfield
theatres list
Follow @fullhyderabad
Follow fullhyd.com on
About Hyderabad
The Hyderabad Community
Improve fullhyd.com
More
Our Other Local Guides
Our other sites
© Copyright 1999-2009 LRR Technologies (Hyderabad), Pvt Ltd. All rights reserved. fullhyd, fullhyderabad, Welcome To The Neighbourhood are trademarks of LRR Technologies (Hyderabad) Pvt Ltd. The textual, graphic, audio and audiovisual material in this site is protected by copyright law. You may not copy, distribute, or use this material except as necessary for your personal, non-commercial use. Any trademarks are the properties of their respective owners. More on Hyderabad, India. Jobs in Hyderabad.