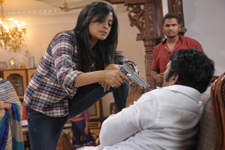 Kritika Deval / fullhyd.com
EDITOR RATING
3.0
Performances
Script
Music/Soundtrack
Visuals
5.5
4.0
3.5
4.0
Suggestions
Can watch again
No
Good for kids
No
Good for dates
No
Wait to rent it
No
Apparently Telugu filmmakers can't wrap their heads around the idea that a strong female character can arise from anything other than immense personal turmoil. Apparently, they also cannot imagine any way in which a female hero could be different from a male one, except in the most obvious ways.

And so, we have Chandi (Priyamani), an unbearably tragic hero(ine) whose only way of dealing with everyone from rapists to power-hungry land grabbers is either by threatening to, or actually demolishing, their family goods. You see, V Samudra's apparent open-mindedness couldn't open up enough to include dastardly female characters, despite the wealth of villainy in Chandi's world. Because the only way a female can assert her dominance over evil people who presume to be powerful is by pointing a gun at their testicles.

Chandi, oh Chandi, how do I ridicule thee. Let me count the ways.

First and foremost, there is the part about how easily these movies can show one woman as a ball-buster, and then go back to the routine of dancing nymphets and pitiful housewives, as if they find the whole idea of putting in place more than one assertive female laughable.

Then, there is fact that, in an effort to be as strident and assertive as possible, all the film manages to do is be irritating and insensitive. The very first scene, for instance, is that of a woman and her friend cornered by a group of hooligans. Inside. A. Bus. You see, in order to introduce their female hero, they had to choose the rawest nerve in the collective female psyche of today, and beat the crap out of it. Never mind that the rest of the film has nothing to do with the current rise in rape cases in our country.

And so it goes on. Every single conflict in the film has been made disturbingly female whether or not the conflict is of that nature. The conflict, for most part, concerns illegal land grabbers. So you can understand our utter bafflement.

We haven't run out of ways. We just thought you might benefit from more background.

So, yeah, Chandi. She's out to get every wrongdoer with an XY chromosome. But, most of all, she's out to get XY-chromosomers who steal the land of others. You see, Chandi wasn't always Chandi ??" the solitary avenging angel from every man's dreams and nightmares, the supposed reincarnation of her namesake. Chandi was once the gentle and innocent Ganga. You can see where I'm going with this, so I will stop now. This film has no more insights to offer you.

Priyamani is one of the few leading ladies who you can remember for more than just her face. It is a sad day for our film industry when the only way a talented woman can get a role that is not utterly passive, is through that of the flattest of caricaturized liveliness. Chandi spouts line after line of "chatchphrases" and "punchlines" which are so lazily written, that the passion she imbues into these words makes a mockery of her self and not the words.

While there is no specific male romantic lead in the story, all other actors are appropriately villainous or paternal. That is the kind of film this is. The story is so utterly listless that it turns all those in it into cardboard cutouts of what they should be. Rather disgusting ones at that. The villain (Ashish Vidhyarthi) is introduced to us in Tollywood's chosen Gomorrah, Bangkok, with a nubile young thing's foot in his mouth.

The cinematography is alright, in that there is nothing you can point at and say, this is crap. The music, on the other hand, has a tendency to empty out the theatre everytime it comes around.

Verdict: Don't watch it, no matter how appealing the posters are. Don't watch it because that would only mean you are validating the work of this filmmaker. Don't watch it, because you have eyes and ears you want functioning later.
Share. Save. Connect.
Tweet
CHANDI SNAPSHOT 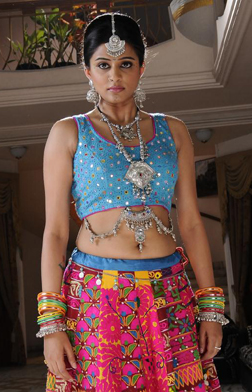 ADVERTISEMENT
This page was tagged for
Chandi telugu movie
Chandi reviews
release date
Priyamani, Krishnam Raju
theatres list
Follow @fullhyderabad
Follow fullhyd.com on
About Hyderabad
The Hyderabad Community
Improve fullhyd.com
More
Our Other Local Guides
Our other sites
© Copyright 1999-2009 LRR Technologies (Hyderabad), Pvt Ltd. All rights reserved. fullhyd, fullhyderabad, Welcome To The Neighbourhood are trademarks of LRR Technologies (Hyderabad) Pvt Ltd. The textual, graphic, audio and audiovisual material in this site is protected by copyright law. You may not copy, distribute, or use this material except as necessary for your personal, non-commercial use. Any trademarks are the properties of their respective owners. More on Hyderabad, India. Jobs in Hyderabad.