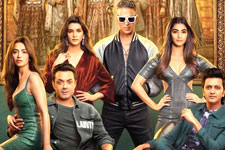 Josh / fullhyd.com
EDITOR RATING
4.0
Performances
Script
Music/Soundtrack
Visuals
4.0
2.0
6.0
6.0
Suggestions
Can watch again
No
Good for kids
No
Good for dates
No
Wait to rent it
Yes
Back in 1419, when bald Canadian princes were grooving with Russian cheerleaders to electronically synthesised desi cra... trap music, when desi princesses with glossy make-up and threaded eyebrows were rocking cleavage-toting blouses, when Maharashtra's ex-CM's son was parodying Kamal Hassan, when Dharmendra's younger son was parodying himself, and all fort architecture was parodying Mahishmati, back in those heady medieval times, a mother and her two children walked out of the cinema hall muttering "What nonsense...!"

Later, we learn that all this business about modern times being progressive is a sham. Because six hundred years passed since 1419, and in 2019, things just stayed the same, if not got worse.

For example, one of the numerous reincarnations in Housefull 4 is of a young female courtier Giggly (Jamie Lever, Johnny Lever's daughter) who is now reborn as Winston Churchgate (Johnny Lever himself). Daughter Lever was in love with Aakhri Pasta (Chunkey Pandey) in 1419 and, so, now Johnny Lever dons large red bindis, loud sarees, blouses, and strategic chest padding running after Pandey wanting his babies. Ugh... what a drag.

The smaller but more valuable plot point is that a tribal warlord Gama (Rana Daggubati, hamming it up as Bhallaladeva roleplaying a Kalakeya) thirsts to kill all the middle-aged men and the young girls. He achieves this once (to our applause) in 1419, but fails in 2019 (to our dismay).

All of this takes place amidst much fanfare - blindingly bright and colourful visuals, numbingly repetitive but trippy beats, and the favourite smell of many Indians - burning money. The high point is the funny lines. Some young men guffawed away when Bobby Deol's name was announced as Dharamputr. Because, you know, he is Dharam's Putr. Sigh...

We admired the fearless matron (mentioned in the first paragraph) wishing she adopted the other gullible children in the hall and dragged us out of the evils of Housefull 4. Because this bunch of willing men in the audience were clapping and hooting when an elderly king sampled a dollop of pig faeces imagining it to be an aphrodisiac. Each single one of us in the hall needed a mother desperately.
Share. Save. Connect.
Tweet
HOUSEFULL 4 SNAPSHOT 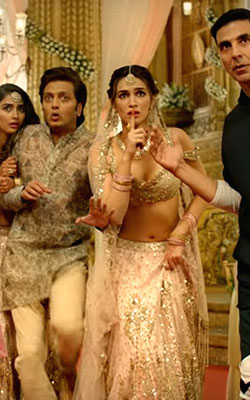 The logic is simple. I have reviewed Kya Kool Hai Hum 3, Mastizaade, and Poonam Pandey's Nasha. I reserve the below 3 ratings for special circumstances :)
Punarvasu Pendse on 26th Oct 2019, 8:18pm | Permalink
"When you are more shook then shook can ever be shook," says Urban Dictionary.

ADVERTISEMENT
This page was tagged for
housefull 4 hindi movie online
housefull 4 1GB hindi movie online
Housefull 4 hindi movie
Housefull 4 reviews
release date
Follow @fullhyderabad
Follow fullhyd.com on
About Hyderabad
The Hyderabad Community
Improve fullhyd.com
More
Our Other Local Guides
Our other sites
© Copyright 1999-2009 LRR Technologies (Hyderabad), Pvt Ltd. All rights reserved. fullhyd, fullhyderabad, Welcome To The Neighbourhood are trademarks of LRR Technologies (Hyderabad) Pvt Ltd. The textual, graphic, audio and audiovisual material in this site is protected by copyright law. You may not copy, distribute, or use this material except as necessary for your personal, non-commercial use. Any trademarks are the properties of their respective owners. More on Hyderabad, India. Jobs in Hyderabad.