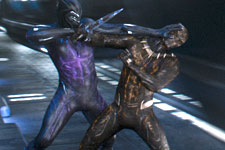 T J Reddy / fullhyd.com
EDITOR RATING
8.0
Performances
Script
Music/Soundtrack
Visuals
9.0
8.0
10.0
7.0
Suggestions
Can watch again
Yes
Good for kids
Yes
Good for dates
Yes
Wait to rent it
No
The trailer for Black Panther clearly stated two things. One, "The revolution will not be televised", and two, "You won't be able to stay home, brother." Well, we weren't going to wait for the revolution to be televised anyway, so we got out of our homes and walked into our nearest cinema to watch it play out on the big screen.

Black Panther follows the story of the fresh king of Wakanda, T'Challa (Chadwick Boseman). After the death of his father (King T'Chaka), he is next in line for the throne, and is tasked with protecting the secrets and the people of Wakanda. As he learns to adjust to his new role, skeletons from his country's past come out of the closet. His rule and his country's sovereignty are threatened by Erik Killmonger (Michael B Jordan) and long-time adversary Ulysses Klaue (Andy Serkis).

T'Challa needs to use his skills as the Black Panther, his judgment as a king, and his band of loyal warriors led by Nakia (Lupita Nyong'O), Okoye (Danai Gurira) and Shuri (Letitia Wright) to defend his country against certain doom.

Blade aside, Black Panther is widely considered the first big-budget superhero film led by an almost all-black cast. This is socially relevant and a huge step in the right direction in more ways than one. In 2017, Wonder Woman broke barriers of her own as her film was termed the first big-budget superhero film led by a woman. The running joke about Wonder Woman is that the filmmakers had to make her pretty, attractive, capable, a badass, likable and relatable, have her save the world, and literal be God to make the world take her and her film seriously. Black Panther too comes with the some of the same asks.

But director Ryan Coogler and co are smart and capable themselves. They double down on some storytelling fundamentals and make maybe the most compelling Marvel movie since the first Iron Man. They achieve this by focusing more on character, and creating a unique world and an identity for their own movie instead of pumping it with oodles of world-building and references to previous and upcoming Marvel projects.

The film addresses many present-day concerns that we as a society have about the world. While this is a movie about a black superhero made by a black director with a black cast, it doesn't shy away from portraying some of the black characters in a negative light. It doesn't take the easy route by blaming The White Man for the issues its characters face. Many of their problems are of their own making, and when push comes to shove they are as guarded and nativist as many others on the present day political stage.

The commentary gets more complicated when you are forced to empathize with T'Challa and his nativist ideals whereas your conditioning to dislike Killmonger is put into disarray as his worldview is that of empowering the downtrodden by using Wakanda's infinite resources. A movie that challenges its audience and their perceptions of the protagonist-antagonist dynamic is always welcome around these parts.

But all the good story-telling and character conflicts come after a first half that is rather forgettable despite a few extremely well-executed actions set-pieces and comedic moments. When you look back at the first 40-50 minutes of the movie, you are bound to find a simpler way of achieving the same outcome that didn't involve destroying a fair bit of a city or having a paper-thin romantic interest for Killmonger.

That being said, these moments of excess are still watchable owing to some stellar acting performances. Chadwick Boseman is almost tailor-made to be a righteous hero. This is Lupita Nyong'o's best work since her turn in 12 Years A Slave. Danai Gurira and Daniel Kaluuya shine as the compelling couple who work as underlings to bosses with wildly differing political views. And watching Angela Bassett get a role worthy of her status is a joy indeed. (Did you know she starred in a movie titled Panther back in the day? Fun fact.)

However, stealing this movie from right under the noses of this star-studded cast is frequent Coogler-collaborator Michael B Jordan. Erik Killmonger might be the first and most compelling villain Marvel has produced till date. Jordan fills his role with a deep sense of tragedy and a motivation that makes disregarding or hating him a distinct impossibility. His crusade against the hierarchy of class and the persecution and disenfranchisement of his fellow kind is not one to be scoffed upon. Kendrick Lamar masterminds a soundtrack that makes sure you don't.

Talking about the music, this excellent work here is the reason we at fullhyd.com are disappointed by most modern film scores and soundtracks. Composer Ludwig Goransson refuses to tow the line and regurgitate inoffensive music for Black Panther. The Senegalese and South African drums, traditional tribal chants and war cries are all indicators of this movie's unique identity. This music will forever be associated with this specific film and cannot be replicated on any other.

Adding to that sense of uniqueness is the mastery of combat and action sequences of Coogler and his cinematographer Rachel Morrison. Bucking the Marvel trend, they compose long one-shot hand-to-hand fight sequences and cleverly choreographed action scenes that spread across vast landscapes. Their edits during these sequences are made with a clear purpose, and that helps an audience glean the space and setting with minimal exposition and confusion. This is action filmmaking at its finest.

The only knocks against this film's visual aesthetic would be its uninspired colour scheme and non-fight cinematography. The movie most definitely follows Marvel guidelines in this regard.

For all its groundbreaking highs, Black Panther is crippled by the trailer for Avengers: Infinity War. With a clear shot of T'Challa in the trailer, Black Panther, the film, is robbed of all tension as we know nothing of truly earth-shattering consequence is set to happen in his standalone film.

But the movie's goal may not be to shatter the earth as it already has enough on its plate. It is a finely made superhero origin story that works feverishly to provide people of colour across the world a hero they can look up to and be proud of. After years of these people being termed savages and being subject to some frankly horrible language and social conditions, watching a hero and a community being recognized as royalty, and as technologically and intellectually superior, respectively, should be a fantastic experience.

Now, if only they added Shaktimaan to the MCU and appealed to over a billion Indians.
Share. Save. Connect.
Tweet
BLACK PANTHER (HINDI) SNAPSHOT 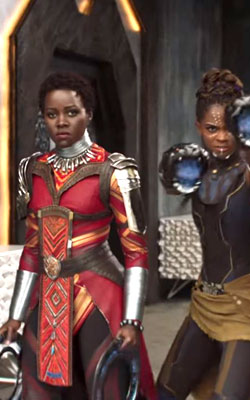 ADVERTISEMENT
This page was tagged for
balck panther full movie in hindi
Black Panther full movie in Hindi download
Blak panther full movie in hindi download
black panther marvel movie in hindi
Black panthar hindi 720p
Follow @fullhyderabad
Follow fullhyd.com on
About Hyderabad
The Hyderabad Community
Improve fullhyd.com
More
Our Other Local Guides
Our other sites
© Copyright 1999-2009 LRR Technologies (Hyderabad), Pvt Ltd. All rights reserved. fullhyd, fullhyderabad, Welcome To The Neighbourhood are trademarks of LRR Technologies (Hyderabad) Pvt Ltd. The textual, graphic, audio and audiovisual material in this site is protected by copyright law. You may not copy, distribute, or use this material except as necessary for your personal, non-commercial use. Any trademarks are the properties of their respective owners. More on Hyderabad, India. Jobs in Hyderabad.