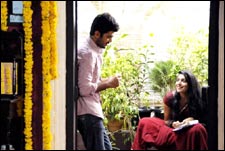 Deepa Garimella / fullhyd.com
EDITOR RATING
6.0
Performances
Script
Music/Soundtrack
Visuals
9.0
6.0
6.5
7.0
Suggestions
Can watch again
Yes
Good for kids
Yes
Good for dates
Yes
Wait to rent it
Yes
Andari Banduvaya isn't about extraordinary human beings as much as it is about very ordinary values. It celebrates a world where heroism is less about being Superman and more about being human.

Hence, exhibition-stall-like portrayal of altruism - yes. However, preachy - no. Because thankfully, Andari Bandhuvaya's posturing isn't about taking the moral high ground. What it does try to do is take the path of case-study presentations of good deeds, using in its defense irrefutable lines of reasoning. So when Nandu (Sharwanand), the protagonist, asks his detractors how it is possible to put a price tag on a person's affection, he does not mean to moralize. His "how?" is just that - a "how?"

The dialogues - several of which are worthy of taking home with you - and its overall theme, are what gave this one the potential to be a Gamyam (incidentally, a Sharwanand outing as well). What keeps it from becoming one, though, is its evident lack of vision. The box office is highly sensitive to the slightest imperfections in any offbeat undertaking, and Andari Bandhuvayya sadly has them in ladle-fuls.

The deal is that Nandu is a do-gooder who makes the world around him easier and lighter to live in through his spontaneous acts of kindness. Kindness is a way of life for him, just as it is for his supremely generous father (Naresh) back home in his village. Nandu's confrontations with a rather contrasting personality, the lady lead Paddu (Padma Priya), lead to much of the first half of the flick.

The warts in the script - that in the first half are forgivable because of the brilliance in writing - then begin to take over. Family drama and romance overshadow the central theme, and "concept-writing" gives way to contrived song-and-dance sequences.

Then first half isn't perfect either. The individual good Samaritan situations seem disjoint and forcefully spelt out - you know what a particular scene is trying to tell you even before you're halfway through it. Characters are caricaturish as well. For example, the heroine's role in the beginning is that of an absurdly calculating miser whose character is set up just so the film can parade around Nandu's goodness.

But then, unarguably, one of the things that work in favour of the flick is the immensely appealing lead pair. Sharwanand has been at this sort of thing before, and his very visible conviction in this movie isn't too surprising.

As the film progresses, it is the super-talented Padma Priya who emerges as the body and soul of the movie. She exudes a Bhoomika-like earthiness as well as a Trisha-like bubbliness - and that is a breathtaking package that hopefully won't go wasted in her future choice of films.

Vijay Sai, who plays Nandu's sidekick, is an enthusiastic actor, but with rough edges. As for the senior actors, Naresh is in a rather brief role, and Krishna Bhagawan in an even smaller one. Both are good to watch, though.

The music is pretty lilting - especially the Kalla Mundu Nuvvu song - and mostly low on voltage. It just serves to aid the story in places. But the in-film product placement of a telecom company - so shameless that the background track is compromised in places - could have been toned down. Some of the songs, like we said, don't gel, neither with the theme of the flick nor with the images of the lead pair in general.

The visuals are easy on the eye, but it is that occasional lack of flow and the obviousness of most sequences that might be hard to take.

Overall, if you'll allow yourself to be unconditionally optimistic for a while, there are indeed a few things in this movie that will keep you that way for a little longer. Watch it if you're game for that kind of thing.
Share. Save. Connect.
Tweet
ANDARI BANDHUVAYA SNAPSHOT

See Andari Bandhuvaya full details
ANDARI BANDHUVAYA USER REVIEWS
1 - 1 OF 1 COMMENTS
POSITIVE  |  NEGATIVE |  NEWEST  |  OLDEST  |  MOST HELPFUL  |  LEAST HELPFUL
USER RATING
8.0
3 USERS
Performances
Script
Music/Soundtrack
Visuals
9.0
9.3
8.3
7.7
Can watch again - Yes
Good for kids - Yes
Good for dates - Yes
Wait to rent it - Unsure
zazen0 on 19th May 2010, 10:49pm | Permalink
Movies like this one need to be supported where it matters - at the box office. If violence and gore is not your cup of tea - then please go see this movie - you won't be disappointed. We need to support any sincere efforts (and huge risks) by directors who are not afraid to go a bit off the beaten track and add to the richness of variety in the Telugu film industry.


Pros: The artists performances & Direction.
Cons: No major cons that can prevent you from seeing the movie at least once!

ADVERTISEMENT
This page was tagged for
Andari Bandhuvaya telugu movie
Andari Bandhuvaya reviews
release date
Sharwanad, Padma Priya
theatres list
Follow @fullhyderabad
Follow fullhyd.com on
About Hyderabad
The Hyderabad Community
Improve fullhyd.com
More
Our Other Local Guides
Our other sites
© Copyright 1999-2009 LRR Technologies (Hyderabad), Pvt Ltd. All rights reserved. fullhyd, fullhyderabad, Welcome To The Neighbourhood are trademarks of LRR Technologies (Hyderabad) Pvt Ltd. The textual, graphic, audio and audiovisual material in this site is protected by copyright law. You may not copy, distribute, or use this material except as necessary for your personal, non-commercial use. Any trademarks are the properties of their respective owners. More on Hyderabad, India. Jobs in Hyderabad.