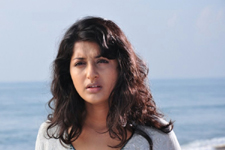 Kritika Deval / fullhyd.com
EDITOR RATING
4.0
Performances
Script
Music/Soundtrack
Visuals
5.0
5.5
3.0
4.0
Suggestions
Can watch again
No
Good for kids
No
Good for dates
No
Wait for OTT
Yes
OK, so it's a horror movie that revolves around an introverted boy with a knife fetish, a girl who goes into heat every time he's around, a really quiet girl who only comes out at night, and her really intense father - all of them Grade-A candidates for being the perpetrators of horror. Perhaps that is why it takes so long to figure out who the ghoul is.

The story doesn't help either. You see, at first you think it is Srinu (Rajeev Mohan), whose only outlet to frustration from being bullied in college is stabbing a tree with a little knife he carries everywhere. He even has a notice board at home, on which he pins up newspaper cut-outs of gruesome murders.

But then, you meet the new girl next door, Moksha (Meera Jasmine). Real cute, but kinda fishy. Also, she's the only person who'll be friends with Srinu. Did we mention her father (Nasseer)? The security guard at the same building, he's scary as hell, overly protective of his daughter, and just as mean. Moksha's little flashbacks, however, tell you of a time when her father was a kind and gentle man who spoiled her rotten, quite literally too, as you'll find out later.

And where does Rahul Dev come in in all of this? He actually plays some kind of creepy tantric who seems to have a thing for this skank (Disha Pandey) who has a thing for Srinu, who in turn has a thing for a Moksha, around whom a lot of people keep dying.

Like with any "horror" movie worth the sidey neighbourhood it is shot in, the raison d'etre for this one ends when you find out who's doing the killing. The ride leading to the climax is pretty okay, too. It just gets a bit twisted when you prefer the killer to the "killee". Typical slasher-flick fare, the victims are either skanks or sleazebags, and you feel zero sympathy for them.

Also, thespic capabilities of the highest order couldn't save this lame "camping in the woods" tale. And while Meera Jasmine and Nasser are certainly better than just good, the only expressions they got to wear in Moksha are the ones worn by the friendly neighbourhood tree. The rest of the cast goes from boring to unbearable, pretty quickly at that.

The only thing going for Moksha is the fact that, no matter how bad the rest of the movie is (and it can get really bad), once you start watching it, you really can't get up without knowing whodunit. So, do yourself a favour, don't even start.

P. S. If you're not going to do yourself the aforementioned favour, do yourself another favour - do not watch it in Sri Mayuri. There are bedbugs there.
Share. Save. Connect.
Tweet
MOKSHA (TELUGU) SNAPSHOT 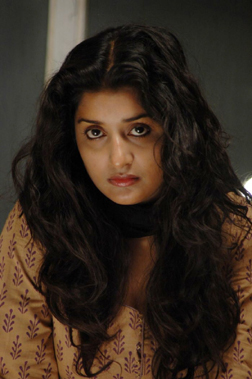 See Moksha (Telugu) full details
MOKSHA (TELUGU) USER REVIEWS
1 - 4 OF 4 COMMENTS
POSITIVE  |  NEGATIVE |  NEWEST  |  OLDEST  |  MOST HELPFUL  |  LEAST HELPFUL
Film lover on 19th Jul 2020, 12:02am | Permalink
Unofficial remake movie...Copied...Congrats director to copy without getting caught.
kittu on 16th Jan 2014, 8:32pm | Permalink
movie handled very well with the suspense by the director(srikanth vemulapalli) .In my point of view it is a better movie than balupu.I had never seen this kind of movie on the silver screen with this kind of suspense and horror.
Chaitu on 29th Jun 2013, 12:29pm | Permalink
A shocking performance from Meera Jasmine. She was cute and scary at the same time. She pulled it off really well. It was a good experience overall.

ADVERTISEMENT
This page was tagged for
Moksha 2013 film
moksha to maya full movie download
moksha movie review
moksh to maya full movie
moksha telugu movie review
Follow @fullhyderabad
Follow fullhyd.com on
About Hyderabad
The Hyderabad Community
Improve fullhyd.com
More
Our Other Local Guides
Our other sites
© Copyright 1999-2009 LRR Technologies (Hyderabad), Pvt Ltd. All rights reserved. fullhyd, fullhyderabad, Welcome To The Neighbourhood are trademarks of LRR Technologies (Hyderabad) Pvt Ltd. The textual, graphic, audio and audiovisual material in this site is protected by copyright law. You may not copy, distribute, or use this material except as necessary for your personal, non-commercial use. Any trademarks are the properties of their respective owners. More on Hyderabad, India. Jobs in Hyderabad.