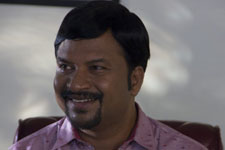 Swaroop Thotada / fullhyd.com
EDITOR RATING
5.5
Performances
Script
Music/Soundtrack
Visuals
6.0
5.0
5.0
6.0
Suggestions
Can watch again
No
Good for kids
No
Good for dates
No
Wait to rent it
Yes
Manalo Okkadu could use a better director and a better protagonist, and reminds you of that all through. The movie looks confused about what it wants to be: a morally charged take on the media's TRP-greed and repugnant practices, or a chronicle of a helpless commoner's plight in the face of this ethically deficient system, or a satire on a sad state where spoofs on the subject are dangerously close to reality. A movie could be all of these at the same time and this one tries to be, but the effort cannot go beyond good intentions.

As soon as a film resorts to black-and-white characterizations, it faces the imminent danger of ending up as a dramatic sermon instead of the engaging cognizant social commentary it intends to be. Unfortunately Manalo Okkadu's director is not smart enough to realize this, and hence looks even more confused in the light of his screenplay that decidedly dries out any cinematic thrills to edge towards verisimilitude. As a result, the characters starve of action most of the time.

So, Krishna Murthy (R P Patnaik) is the embodiment of idealism. A lecturer in a private junior college, he is the ideal teacher, ideal husband and ideal human being, who is revered by his wife (Anita Hassanandani), his students and even his friends. His virtuousness is of such a radioactive degree that his neighbour, a fruit vendor, even names his son after him. Patnaik plays the character with an almost overzealous smile - which however ends up merely as a dogged attempt to establish the character's sweetness rather than makes it likeable. All that idealism puts the character out of the reach of your empathy.

The villain is Pratap (Sai Kumar), a power-hungry media baron surgically removed of ethics, remorse and empathy. In his relentless pursuit of sensation, he is happy to wager journalistic integrity for any news story hot enough to give his viewers' remotes a rest for a few minutes. He runs a TV channel "Moodo Kannu" full of employees that revere his ideology as their Mein Kampf. Also he occasionally lets off steam with his hot and equally vile assistant (Sreemukhi). That adds nothing to the plot, but helps explain to what lengths the film is willing to go to demonize his character. But let's get back to that again.

On a disastrous day, Krishna Murthy finds himself in a soup when Moodo Kannu telecasts a story on his alleged molesting of his students, and they won't even use the word "alleged" in their "Keechakudu/Mrugadu" template. Turns out they have mistaken the lab assistant Krishna Murthy with lecturer Krishna Murthy, but Murthy garu's life is already upside down. When he tries to bring the girl and clear the air, she suddenly goes missing, and he is left to being torn apart by everyone around him. Now he has to piece back his assassinated character.

The reality-laden plot offers enough time and space for satire and social commentary, but the film's success in that direction is only meagre, because there is not much inside information revealed, and there are no insightful revelations. The movie merely confirms the conceptions we already have of the media, and ends up stating the obvious most of the time.

The film targets the way ill-informed TV channels resort to merciless character assassination for sensation and won't care to admit when a mistake rolls out, and their judgemental and entitled approach towards journalism. Though it concedes the reality that at the end of the day news is a business and people do what they do to pay their bills, it doesn't display this awareness in its characterisations where it resorts to stereotypes.

Which brings us back to characterizations. Devoid of fully fleshed out characters, the film plays out only as a parable, and even then, is crippled by the plot that doesn't allow action. Pace and punch usually compensate for each other, but here both go missing, leaving the proceedings less impactful than they should have been.

Patnaik clearly stresses that he doesn't intend this as a blanket attack on all media houses. We even see Gollapudi Maruti Rao (what a pleasure to see him) as an idealistic media boss of a "society" channel that is struggling to find its ground in this increasingly commercial battleground.

Nassar stands out in his character as a minister weary of the media's double standards. Sai Kumar brings menace where it is not required, but Sreemukhi has fun even in her ill-written role. Tanikella Bharani, Giridhar and Raghu Babu deliver what is expected. Duvvasi Mohan, Jayaprakash Reddy and other comedians struggle to bring laughs.

The cinematography doesn't set any mood or bring any feel here. It merely records the happenings, and it is not by design. The movie could have benefited from shredding off songs that are completely unnecessary and out of place. Moodo Kannu has some fine lyrics, though.

Manalo Okkadu has an honest ambition but is failed by the inept writing and misguided direction. Patnaik surprisingly is not picking up any mastery over the craft with each film. Perhaps he is too content with the choice of his subject matter itself, and is sidelining the fact that presentation matters.
Share. Save. Connect.
Tweet
MANALO OKKADU SNAPSHOT 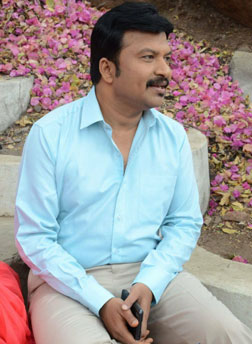 ADVERTISEMENT
This page was tagged for
okkadu telugu movie
Manalo Okkadu telugu movie
Manalo Okkadu reviews
release date
R P Patnaik, Anita Hassanandani
Follow @fullhyderabad
Follow fullhyd.com on
About Hyderabad
The Hyderabad Community
Improve fullhyd.com
More
Our Other Local Guides
Our other sites
© Copyright 1999-2009 LRR Technologies (Hyderabad), Pvt Ltd. All rights reserved. fullhyd, fullhyderabad, Welcome To The Neighbourhood are trademarks of LRR Technologies (Hyderabad) Pvt Ltd. The textual, graphic, audio and audiovisual material in this site is protected by copyright law. You may not copy, distribute, or use this material except as necessary for your personal, non-commercial use. Any trademarks are the properties of their respective owners. More on Hyderabad, India. Jobs in Hyderabad.