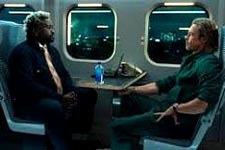 Punarvasu Pendse / fullhyd.com
EDITOR RATING
7.0
Performances
Script
Music/Soundtrack
Visuals
8.0
5.0
8.0
7.0
Suggestions
Can watch again
Yes
Good for kids
No
Good for dates
No
Wait for OTT
No
Bullet Train is a movie with a simple rule - said train is fast, has few stops, and when it does, these stops are only for one minute. The audience quickly learns what this means - the train is its own isolated echo chamber, and for the characters who are drawn into this deathtrap by fate, anything goes.

Adapted from the popular Japanese novel Maria Beetle by Kotaro Isaka, Bullet Train is a frenetic and chaotic ride chock full of cartoonish violence and silly humour. Director David Leitch, who co-directed the first John Wick movie with Chad Stahelski, and the more recent Deadpool 2 and Hobbs And Shaw, tries to outdo not only the action and the insanity of his previous offerings, but also match the comedy - visual and otherwise - of the Deadpool films.

Ladybug (Brad Pitt) is a newly reinstated assassin on his first mission post his comeback, a snatch-and-grab job on a bullet train in Japan. Complicating his job are a brotherly duo of assassins - Tangerine (Aaron Taylor-Johnson) and Lemon (Brian Tyree Henry), also on the train to finish their job contracted by a powerful mafia lord named White Death (Michael Shannon). Also on the train is the Japanese assassin Yuichi "The Father" Kimura, who is on the train to avenge the attempt on his son's life.

More people on the train have their fates intertwined, as Ladybug encounters more mysterious characters - The Prince (Joey King), The Wolf (Benito A Martinez Ocasio), and The Hornet (Zazie Beetz). The clock is ticking as the bullet train speeds its way from Tokyo to Kyoto, with Ladybug having only his handler, Maria Beetle, to guide him.

If Snatch met Kill Bill, and both met Deadpool on a train - we'd probably end up with Bullet Train. This slick entertainer rarely feels stretched out with its 126-minute running time, until the very end when the overall mystery feels somewhat of a letdown. That being said, Bullet Train has every ingredient you need to make a good dark comedy - it boasts of an outstanding ensemble cast with multiple megastar cameos, it is absurd and does not take itself too seriously, it is action-packed and vividly gory yet full of colour, and it banters its way through to the climax alongside some clever (and some not-so-clever) visual comedy. The only thing missing is a script which could handle the frenetic action in a streamlined manner. Instead what we get is a movie constantly zigging and zagging through the current timeline alongside untold flashback sequences, which prevent it from creating an unbroken flow for the audience to follow.

The performances from almost every actor in Bullet Train elevate it far above what its average script had any right to. Lead actor Brad Pitt is extremely comfortable playing an assassin who is trying to be better, and looks to be having a blast with his comedic timing and natural energy. Joey King doesn't look menacing enough, despite her efforts (though we suspect that is something that was done on purpose). Aaron Taylor-Johnson and Brian Tyree Henry are fantastic as the two brothers Tangerine and Lemon, and their antics draw the most amount of laughs. The latter especially is fantastic, with his penchant for trying to understand people through wisdom derived from the kids show Thomas The Tank Engine being the funniest running gag in the movie.

Bullet Train looks good and is fun to watch, and its slightly weaker script can be forgiven due to the fantastic performances by its talented cast. The film makes an elaborate show of violence and the body count is high - but we know from minute one that everything is over-the-top on purpose and every character is expendable. If such dark comedy is your thing, Bullet Train is a very fun ride. If not, well, it still remains a very fun ride. 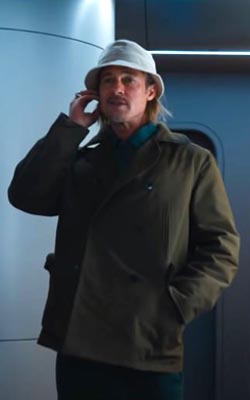 ADVERTISEMENT
This page was tagged for
Bullet Train english movie
Bullet Train reviews
release date
Brad Pitt, Joey King
theatres list
Follow @fullhyderabad
Follow fullhyd.com on
About Hyderabad
The Hyderabad Community
Improve fullhyd.com
More
Our Other Local Guides
Our other sites
© Copyright 1999-2009 LRR Technologies (Hyderabad), Pvt Ltd. All rights reserved. fullhyd, fullhyderabad, Welcome To The Neighbourhood are trademarks of LRR Technologies (Hyderabad) Pvt Ltd. The textual, graphic, audio and audiovisual material in this site is protected by copyright law. You may not copy, distribute, or use this material except as necessary for your personal, non-commercial use. Any trademarks are the properties of their respective owners. More on Hyderabad, India. Jobs in Hyderabad.