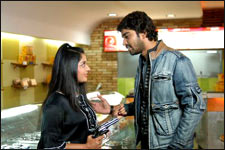 Deepa Garimella / fullhyd.com
EDITOR RATING
3.0
Performances
Script
Music/Soundtrack
Visuals
7.0
3.0
4.0
4.0
Suggestions
Can watch again
No
Good for kids
No
Good for dates
No
Wait to rent it
Yes
How low does Aakasa Ramanna go? Somehow, the answer doesn't depend on what you think of an entire sub-plot dedicated to how Venumadhav's character loses his key reproductive part to a road accident and how it is found by his friends later on.

Reported to be a rip-off of a Hollywood thriller 11:14, Aakasa Ramanna has an ambitious concept of weaving half a dozen stories and converging them to a single point in time. Unfortunately, it is executed with the expertise of a nail cutter trying to trim a hedge.

An Aakasa Ramanna narrates the story (and bears no other connection to the actual plot), speaking of how fate's punishments are pretty instant. There are these accidents one night that take place all at one instant. What transpired before that moment in multiple lives forms the story.

The characters in each of the sub-plots are all pretty amoral, if not evil. Rana (Allari Naresh) had walked out on the simple but annoying Tara (Meera Jasmine) to sleep with the hot and sly Isha (Gauri Pandit), who has now made a career out of blackmailing her multiple boyfriends.

Several others are part of this karma mesh. The inexplicably cheap Timothy (Venu Madhav) keeps telling his wife he'll never sleep with her and informs her he's heading out for a night with a hooker with his friends (Srinivas Reddy and Satyam Rajesh). Then, there is Rajeev Kanakala and his wig together playing a drunken party-goer who gets involved in a painful hit-and-run case.

And while it tries to be creative and novel, the glaring logical errors simply prevent you from taking it seriously. For example, Tara is shown as an attendant in a supermarket, but within minutes, it becomes a gift gallery, and a few minutes later, a coffee shop. Then, there is the issue of characters thinking aloud to explain the plot nuances â€" it furthers the silliness of the flick.

All the performances are quite good, except for the shrill Meera Jasmine, who takes the air-headed Tara to a whole new level of giddiness. But while Allari Naresh, Rajeev Kanakala and Sivaji pull it off well as the protagonists, Nagababu and Rao Ramesh make their own efforts look like, well, efforts.

The movie's budget is pretty low, and though the screenplay consists of the story jutting back and forth, the overall look is not sleek and trendy. As for the music, Chakri goes quite wrong, and the soundtrack jars you.

Aakasa Ramanna has its share of pluses, and if you're curious, you could watch it thrice - once in the beginning, once around the interval, and once in the end.

ADVERTISEMENT
This page was tagged for
amazon
Aakasa Ramanna telugu movie
Aakasa Ramanna reviews
release date
Allari Naresh, Rajeev Kanakala
Follow @fullhyderabad
Follow fullhyd.com on
About Hyderabad
The Hyderabad Community
Improve fullhyd.com
More
Our Other Local Guides
Our other sites
© Copyright 1999-2009 LRR Technologies (Hyderabad), Pvt Ltd. All rights reserved. fullhyd, fullhyderabad, Welcome To The Neighbourhood are trademarks of LRR Technologies (Hyderabad) Pvt Ltd. The textual, graphic, audio and audiovisual material in this site is protected by copyright law. You may not copy, distribute, or use this material except as necessary for your personal, non-commercial use. Any trademarks are the properties of their respective owners. More on Hyderabad, India. Jobs in Hyderabad.