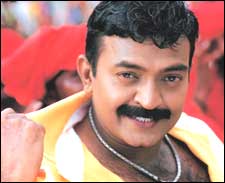 Deepa Menon / fullhyd.com
EDITOR RATING
3.0
Performances
Script
Music/Soundtrack
Visuals
NA
NA
NA
NA
Suggestions
Can watch again
NA
Good for kids
NA
Good for dates
NA
Wait for OTT
NA
Patriotism is key, if you must enjoy Aptudu. So is an ability to sit through gut-busting violence and blood-soaked swearing at generalized badness. Face your fear, grab the bull by its er, horns, and shake your fist in the face of adversity. If all else fails tear off the heroine's blouse. Jeez, we thought that move had had its fifteen minutes years ago.

For a film that draws so heavily on patriotism, though, Aptudu is quite vague about what its issues are exactly. All the righteous anger is focused on one man whose main claim to fame seems to be a crowd of grinning henchmen so ugly they make him look like the bronzed warrior of love. This particular Adonis is called Gangi Reddy, which might explain why he looks so pissed all the time. Maybe he wanted a cooler name like Loin or Shaaka. Ah, they don't make villains like they used to.

The most that Gangi Reddy's ambitions allow him are random exercises in land grabbing. One such excursion brings him to a quiet little neighbourhood called Gokulam Colony, where his goons spend much time terrorizing innocent citizens, but not really displacing them in any way. Gangi Reddy decides this approach is too emasculating for a stud such as he, so he gets a few people killed to sort of set an example.

And here's where the one shining hope of Gokulam Colony steps forward in the shape, form and bad wig of Bose (Dr. Rajashekar). Inspired by the unusual idea that people should not be murdered for no good reason, Bose takes on Mr. Reddy and his muscular wall of thugs. He beats them up regularly, and soon they give up taking him on with puny implements like the traditional ornamental dagger and chain.

But finally, it is a chain that does Bose in. This particular chain is fastened around the neck of his unsuspecting father, who is then forced to lick Gangi Reddy's boot in the ultimate show of subservience and copycat screenplay. Bose is unable at that point of time to actually do any more useful than string oaths at the sky. But it is at his father's deathbed that he learns the secret to a successful freedom struggle: tell people what to do.

Bose follows his father's advice, trying to remove the fear of the brutes from the hearts of his neighbours. This plan, which isn't popular to begin with, finally loses all appeal when it lands one more person in the morgue and several more in the casualty ward. Things are looking hopeless, but just then the heroine (Anjala Zhaveri, who makes a special appearance for songs and unscheduled stripping) is grabbed by Gangi Reddy in an impromptu enactment of the censored Draupadi Vastraharan scene from DD's Mahabharath.

Anyway, so the last bit of violence finally sparks a revolution and the people of Gokulam Colony gang up on Gangi. And Bose walks into the sunset with his girl on one arm and the tricolor soaring in his heart. This after all is what our forefathers fought for. Not.

ADVERTISEMENT
This page was tagged for
aapthudu wiki
??????? ??????
??????? ??????
???????
??????? 2004
Follow @fullhyderabad
Follow fullhyd.com on
About Hyderabad
The Hyderabad Community
Improve fullhyd.com
More
Our Other Local Guides
Our other sites
© Copyright 1999-2009 LRR Technologies (Hyderabad), Pvt Ltd. All rights reserved. fullhyd, fullhyderabad, Welcome To The Neighbourhood are trademarks of LRR Technologies (Hyderabad) Pvt Ltd. The textual, graphic, audio and audiovisual material in this site is protected by copyright law. You may not copy, distribute, or use this material except as necessary for your personal, non-commercial use. Any trademarks are the properties of their respective owners. More on Hyderabad, India. Jobs in Hyderabad.