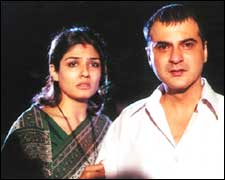 Deepa Menon / fullhyd.com
EDITOR RATING
1.0
Performances
Script
Music/Soundtrack
Visuals
NA
NA
NA
NA
Suggestions
Can watch again
NA
Good for kids
NA
Good for dates
NA
Wait to rent it
NA
There are only two kinds of movies that can depress you. The ones that get everything right and the ones that get everything wrong. But the makers of Jaago weren't going to satisfied with just a badly made film. They were going for all-out fultu tasteless. One must congratulate them for doing such a thorough job of it.

The problem isn't any of the usual ones like mediocrity, inanity and banality. All of those would have been excusable. What isn't is the two hours of unadulterated lurid BS that Mehul Kumar churns out.

And what makes it doubly reprehensible is what it uses as its subject: the real-life story of a 9-year-old girl who was raped by three men in a Mumbai train, in full view of the other people in the compartment. Jaago is meant to educate our society on the implications of child rape and on our role in battling it. A great idea, no doubt. Except that it has every last drop of sensitivity squeezed out of it by the cast, camera and director.

You're introduced to Shruti and her parents at the start of the film. Like other Mumbaiyyas, Shruti takes a train to school everyday. One day she's kept in after school for dance practice, and gets locked in by mistake. By the time she's rescued and gets to the station, it's past midnight.

Vulgar in its total lack of imagination, crassly stupid in execution, and around four days long, the molestation scene is your cue to walk out and buy a short-term amnesia pill. All through the scene, a family of three in the same compartment watches on with expressions of extreme discomfort. One of them looked like she could snap the three guys in half with two fingers, but chooses to snatch glances and look mildly scandalized. Brilliant casting.

An unconscious Shruti is taken to hospital, where she dies. Because the case is high-profile, the police are pressurized to nab the culprits immediately. Manoj Bajpai (at least he looks like that guy from Satya) is put on the case.

The rest of the movie is about the parents' fight for justice. All pertinent issues like corruption, politics in prison and the slack judicial system, are dealt with in the same dumbass way as everything else. If your enemy sinks low, you sink even lower - this is the general theme. The simplicity of it all makes you want to sit down and weep.

Raveena Tandon dresses like a streetwalker to "lure" the rapists - that should give you an idea of the scriptwriter's sensibilities. Later in her emotional courtroom scene, she declares she'd rather her daughter died than live with the shame of rape. Great job with the social education, guys.
Share. Save. Connect.
Tweet
JAAGO SNAPSHOT

ADVERTISEMENT
This page was tagged for
Jaago hindi movie
Jaago reviews
release date
Raveena Tandon, Manoj Bajpai
theatres list
Follow @fullhyderabad
Follow fullhyd.com on
About Hyderabad
The Hyderabad Community
Improve fullhyd.com
More
Our Other Local Guides
Our other sites
© Copyright 1999-2009 LRR Technologies (Hyderabad), Pvt Ltd. All rights reserved. fullhyd, fullhyderabad, Welcome To The Neighbourhood are trademarks of LRR Technologies (Hyderabad) Pvt Ltd. The textual, graphic, audio and audiovisual material in this site is protected by copyright law. You may not copy, distribute, or use this material except as necessary for your personal, non-commercial use. Any trademarks are the properties of their respective owners. More on Hyderabad, India. Jobs in Hyderabad.