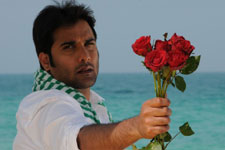 Still trying to figure out how the whole thing works? Well, first there is Shankar Anna (Sri Hari) who is the local Robin Hood, but with the kind of grave magnetism that only Sri Hari knew how to pull off. Anyway, he saved the land of an old age home from going into the unscrupulous hands of the land mafia. How? By speechifying the owners of the land into compliance. Literally. So, that's the social interest part.

Now the mafia lord is after Shankar Anna's hide, but the only way to get at him is through his sister Madhu (Yami Gauthami). There's the villainy bit taken care of.

Now, Madhu is slowly falling for Rishi (Tarun), the State students' union leader and resident avenging angel. One of the methods of courtship he uses is a mock kidnap wherein he spends 20 mins with a knife held at her throat. Romantic much?

As far as the action is concerned, this is a posthumous treasure left by Sri Hari. You cannot possibly imagine that there'll be any skimping on the rolling heads. If you can't figure out why Shankar Anna's driver would let Madhu go off in a strange car, or why the villain Nagineedu (as if Nagineedu needs another name to sound villainous!) hired something so moronic as to try to ravish the girl before handing her over to Nagineedu, or how Rishi finds out where the ravishment is to happen - considering that he didn't even know who took the girl, or why there were so many filthy songs where there shouldn't be any - well, we have nothing but sympathy for your baffled mind, but it is your own fault for daring to figure them out in the first place.

Tarun looks quite charming with his extra pounds. Yami Gautami is pretty, and suits the role. The rest of the characters are as they ought to be. But, quite honestly, this utterly ridiculous film belongs to Tarun and Srihari and their flying fists. Oh, and to Srihari's booming voice, which Gautami makes use of so charmingly while convincing her brother to let her go for a college trip (although... hmmm... now that we think about it, we have seen the scene before - Jab Pyaar Kiya Tho Darna Kya ring a few bells?).

The production values are quite mediocre, although the music videos are a most unique kind of fun.

Whether or not this is a good movie is debatable. However, we are convinced that you should watch Yuddham in quite the same way as that everyone should get robbed once in their lifetime, or get drunk to the gills and then vomit them out, or get groped by someone of their own gender - just one of those ambiguous life experiences without which life isn't quite rounded off.
Share. Save. Connect.
Tweet
YUDDAM SNAPSHOT 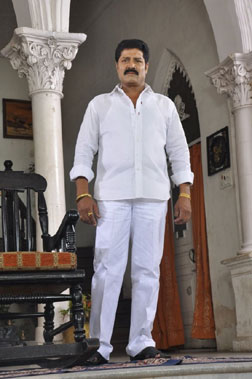 ADVERTISEMENT
This page was tagged for
Yuddam telugu movie
Yuddam reviews
release date
Tarun, Yami Gautam
theatres list
Follow @fullhyderabad
Follow fullhyd.com on
About Hyderabad
The Hyderabad Community
Improve fullhyd.com
More
Our Other Local Guides
Our other sites
© Copyright 1999-2009 LRR Technologies (Hyderabad), Pvt Ltd. All rights reserved. fullhyd, fullhyderabad, Welcome To The Neighbourhood are trademarks of LRR Technologies (Hyderabad) Pvt Ltd. The textual, graphic, audio and audiovisual material in this site is protected by copyright law. You may not copy, distribute, or use this material except as necessary for your personal, non-commercial use. Any trademarks are the properties of their respective owners. More on Hyderabad, India. Jobs in Hyderabad.