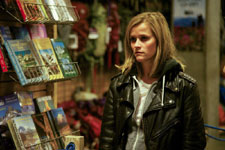 Zehra Abbas / fullhyd.com
EDITOR RATING
7.5
Performances
Script
Music/Soundtrack
Visuals
7.5
7.5
6.5
8.0
Suggestions
Can watch again
Yes
Good for kids
No
Good for dates
No
Wait to rent it
No
After losing her mother to cancer, and her marriage to her own promiscuity and drug addiction, Cheryl Nyland changed her name to Cheryl Strayed ("like a stray dog" as Witherspoon explains in the film) and embarked alone on a hike of the 1,100-mile Pacific Crest Trail because she needed to find "my way back to the person I used to be". Her 2012 memoir, Wild, chronicles her arduous, almost hermetic, and ultimately healing journey.

Reese Witherspoon, forever emblazoned in cinematic memory as a ditzy, blonde lawyer, would not be an obvious first choice for the role of Strayed in the memoir's cinematic adaptation, Wild. But then, she decided to produce it and cast herself. So there. At the beginning of the film, as she struggles with her enormous backpack and what looks like a pretty tame trail, her performance is relegated to scowling and panting. And the panting is not Legally Blondesexy but 127 Hours oh-so-not-sexy, and you start to wonder if this is going to be Fox Studio's "The Adventures Of Cheryl And Monster" (her backpack FYI) version of the best-selling memoir.

However, the audience is forced to grudgingly lower the raised eyebrows a few minutes into the film. You soon realize that the director, Jean-Marc Vallee, is guiding you, quietly and imperceptibly, through Strayed's personal evolution. The annoying, panting novice metamorphoses into a determined hiker, reconciled to her life and herself at the end.

The actress fortifies the narration with a performance that is subtle and restrained in its depiction of nothing less than a catharsis of Aristotelian dimensions achieved in slow motion on the lonely vistas of the Pacific Crest Trail. Vallee succeeds in extracting a portrayal from Witherspoon that earned her an Oscar nomination, and the talent on display in "Walk The Line" and that sadly uncelebrated gem "Election" is on show here.

Laura Dern is a great talent herself but struggles in the role of Cheryl's mother. It's difficult to find Strayed's inspirational parent, whom she grieved for years, in Dern's hollow and forced act. Thomas Sadowski as Paul, Cheryl's ex-husband, creates a far more sympathetic and real character. Even Gaby Hoffman as her friend Aimee delivers a memorable turn in the few minutes that she appears on screen.

If you're wondering whether Wild is a gritty and realistic depiction of hiking, the opening scene will dispel all doubts. Witherspoon peels off a sock and then peels off her injured thumbnail. Before you can finish grimacing in horror, her boot plummets into the ravine and she screams with rage and frustration. However, be warned, that's pretty much the only type of action in the film. Despite the sheer physicality of the premise, the movie is geared to be more of an interior experience for the audience, and is not nearly as dramatic as Vallee's last film, Dallas Buyers Club.

The narrative is driven by the haunting memories of the protagonist. As images and words trigger recollections, Strayed processes and releases the pain of her past through an almost impressionistic exorcism; all the while trudging forward on the trail. The device of the trail journal is also used to good effect and documents the protagonist's inner growth. And for all those literary junkies out there, Strayed's only healthy addiction is her craving for beautiful literature. So the narrative is embellished with gems by Adrienne Rich, Emily Dickinson and Robert Frost among others.

Wild is rich in symbolism and a treat for the attentive viewer. Cheryl systematically tears out pages of the guidebook as she progresses on her journey, and you begin to see how she is lightening her load, both literally and metaphorically; a load most emphatically symbolized by her heavy backpack and her initial troubles with it. This underlines not just the obvious themes of grief and healing but also the more obscure theme of existential loneliness. Are we less lonely when we are alone? The answer dawns on you as Simon and Garfunkel's "Homeward Bound" plays softly in the background, while Witherspoon trudges through the barren landscapes of the trail

Everyday's an endless stream,
Of cigarettes and magazines.
And each town looks the same to me,
The movies and the factories.

Vallee did well to retain his core team from Dallas Buyers Club for this film. Yves Belanger's cinematography captures all that is grand and majestic about the PCT trail without making it look picture-postcard-pretty, thus retaining the atmosphere of realism and grittiness crucial to the story. His visuals are ably arranged by the editor, Martin Pensa, who deserves special mention for doing his bit in keeping you engaged during a 2-hour film in which the story revolves around a woman who, to put it bluntly, has flashbacks while hiking. Pensa does a brilliant job, evident in scenes such as a lonely Cheryl yelling "come back!" to a fox, which then segues to her mother on the verge of passing away.

As the movie reaches its climactic moment, you are so deeply immersed in the narrative that the ending seems a bit abrupt. However, you leave the theatre subdued by how easy it is to lose yourself and marveling at the kinds of journeys that different people embark upon to find what gets buried within. This is reflective and restrained cinematic storytelling that requires you to pay close attention, and is not casual, weekend fare. If nothing, go for Witherspoon's controlled depiction of a woman who allows life to strengthen her but not harden her.
Share. Save. Connect.
Tweet
WILD SNAPSHOT 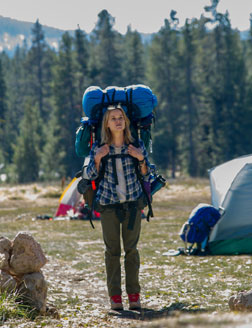 ADVERTISEMENT
This page was tagged for
Wild english movie
Wild reviews
release date
Reese Witherspoon, Laura Dern
theatres list
Follow @fullhyderabad
Follow fullhyd.com on
About Hyderabad
The Hyderabad Community
Improve fullhyd.com
More
Our Other Local Guides
Our other sites
© Copyright 1999-2009 LRR Technologies (Hyderabad), Pvt Ltd. All rights reserved. fullhyd, fullhyderabad, Welcome To The Neighbourhood are trademarks of LRR Technologies (Hyderabad) Pvt Ltd. The textual, graphic, audio and audiovisual material in this site is protected by copyright law. You may not copy, distribute, or use this material except as necessary for your personal, non-commercial use. Any trademarks are the properties of their respective owners. More on Hyderabad, India. Jobs in Hyderabad.