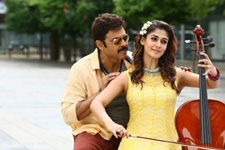 Ravi Kandala / fullhyd.com
EDITOR RATING
4.0
Performances
Script
Music/Soundtrack
Visuals
7.0
4.0
4.0
7.0
Suggestions
Can watch again
No
Good for kids
No
Good for dates
No
Wait for OTT
No
Nirnayam, starring Nagarjuna and Amala, was a real fun movie. The film featured Nagarjuna as an undercover police officer shadowing Amala in an attempt to catch her father Murali Mohan who's accused of several murders and is on the run. The film was not a great money-spinner in its time, but was later recognized as a classic and enjoys an extended lease of life on TV. The fact that it had great music also helps its longevity.

Now Maruthi decided to take the plot of Nirnayam, strip it of all the great comedy, add mediocre songs, and try and sell the same plot to the audiences of today with an aging Venkatesh, a made-up Nayantara and some supporting actors - and fails spectacularly.

The film starts off showing the gentle side of ACP Krishna (Venkatesh) - a kind-hearted policeman who will beat up goons and then have poojas done in their name for their well-being. He meets Sailaja (Nayantara), a woman who's trying to get her three sisters educated from the income she gets by running a catering business. Sailaja is also being pursued by some goons who keep asking her to reveal the whereabouts of her dad. It turns out that the local rowdysheeter Mallesh Yadav (Sampath) and MLA Pucchappa (Posani Murali Krishna) want to get hold of a video shot by her dad.

Krishna gets close to Sailaja, solves all her problems, and tells her that he loves her and wishes to marry her. And then comes the big twist (that you can see from a few hundred miles away).

Maruthi succeeded big time with Bhale Bhale Magadivoy, a movie where he gave his leading man a trait of forgetfulness and milked that for all the laughs possible. In Babu Bangaram, you get a big introduction to Venkatesh as the Mother Theresa of the police department, and you expect that the characterization to be used to provide loads of laughs - however, that bit is all but forgotten after the first half hour. In the second half, his entire persona changes and he announces that he's giving up all his "jaali" and "karuna" - so much for the extended introduction to the conceit.

Also, when filmmakers feel compelled to include comedians from Zabardast to provide laughs for a few minutes, it is a clear indication that they're out of ideas to take their script ahead. And when they bring in Brahmanandam in an ill-conceived comedy track bang in the middle of the second half, they've officially given up. Both of these happen in Babu Bangaram - enough proof that Maruthi was out of his depth.

Venkatesh has accepted enough times that he's growing older and that it is difficult for him to continue at the same pace. While he has done the role to the best of his abilities, the age is indeed showing, and it is difficult for him to continue. Nayantara plays a poor woman almost about to be thrown out of her house, but wears highlights in her hair and designer clothes all the time - be it in a temple or in the kitchen or in a market. Prudhvi is given a meaty role in the first half and he does quite well. Though some of the spoofs are overdone, he salvages a lot of that chunk of the film with his comedy. The remaining cast is decent.

The songs could have been much better. The film is fairly well shot. What is however surprising is the lack of lip-sync for some of Venkatesh's dialogues - especially his signature Ayyo Ayyo Ayyayyo dialogue from Bobbili Raja that is recycled here.

Babu Bangaram has a number of dialogues pointing to the fact that Venkatesh is back - sadly, it's hard to share that opinion. He needs a better script and a much more competent director who can use the talented actor's great comic timing to help him make a real comeback.
Share. Save. Connect.
Tweet
BABU BANGARAM SNAPSHOT 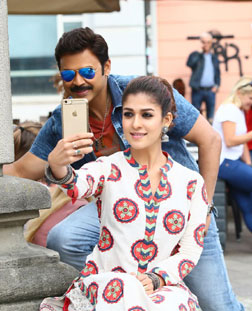 ADVERTISEMENT
This page was tagged for
babu bangaram telugu full movie
Babu Bangaram telugu movie
Babu Bangaram reviews
release date
Venkatesh, Nayantara
Follow @fullhyderabad
Follow fullhyd.com on
About Hyderabad
The Hyderabad Community
Improve fullhyd.com
More
Our Other Local Guides
Our other sites
© Copyright 1999-2009 LRR Technologies (Hyderabad), Pvt Ltd. All rights reserved. fullhyd, fullhyderabad, Welcome To The Neighbourhood are trademarks of LRR Technologies (Hyderabad) Pvt Ltd. The textual, graphic, audio and audiovisual material in this site is protected by copyright law. You may not copy, distribute, or use this material except as necessary for your personal, non-commercial use. Any trademarks are the properties of their respective owners. More on Hyderabad, India. Jobs in Hyderabad.