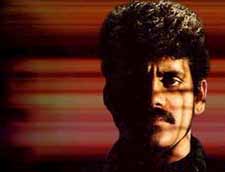 EDITOR RATING
8.0
Performances
Script
Music/Soundtrack
Visuals
NA
NA
NA
NA
Suggestions
Can watch again
NA
Good for kids
NA
Good for dates
NA
Wait for OTT
NA
In September of 1989, there were some posters coming up here and there that showed a stern-looking young man crossing a railway track, with 4 hockey stick and chain yielding men standing behind, looking on. That has got to be one of the most impactful visuals ever if measured by how many persons' eyes and curiosity it caught. The young man was Nagarjuna, and the posters were for the film Shiva, which went on to become probably the biggest hit that we know of in Telugu movies.

Shiva spawned a mass hysteria: people were standing in queues for over 5 hours for tickets in the film's sixth week, being rough became the in thing and the cycle chain became an emblem of machoism. And Nagarjuna became a superstar. The film converted his biggest weakness - a bland face - into its strongest point. Can you ever forget that scene where he's wrapping that chain around a closing fist with the whole college watching from the corridors? Yet, it's possibly one of the easiest scenes to emote.

Indeed, Shiva was never about the actors. It showed the genius of a 20-odd-year-old rookie called Ram Gopal Varma. The brilliance of Siva lay primarily in its direction and its editing. It portrayed things the way they existed. The goons were people you knew, the college-goers were your colony youngsters, the campus politics were how you saw them, and the lingo was what you heard and spoke. The only unrealistic thing about the film was Shiva himself. And that was possibly why the rage happened. We need a superhero in our daily lives who looks like we can be him.

Shiva did a lot of things for lots of persons. It catapulted Nagarjuna into the top bracket of Telugu heroes, it made a debutant director (Ram Gopal Varma) a household name, it paved the way for Chakravarthi, the villain's sidekick, to become a hero himself, and it created a new genre of movies where the characters spoke real-life language (most of them came from Varma himself). It even made Devi some kind of a celebrity among theaters, thanks to the sound effects. The movie got so hi-profile that the state's governor criticized it saying such movies only helped spawn violence.

Nobody, including Varma himself, ever again tasted the kind of success that Shiva enjoyed. Varma made better movies though - Satya being the case in point. Satya was something like Shiva except that it came without the superhero, and was hence more realistic.

ADVERTISEMENT
This page was tagged for
à¤¡à¥‰à¤Ÿ à¤®à¥ˆà¤Ÿà¥à¤°à¤¿à¤•à¥à¤¸ à¤ªà¥à¤°à¤¿à¤‚à¤Ÿà¤°
à°µà°¾à°³à±à°³à±
xxxà¤¦à¥ à¤¨à¤¿à¤¯à¤¾à¤ à¤®à¥‡à¤¸à¤¬à¤¸à¥‡à¤®à¥Œà¤Ÿà¥€à¤—à¤¾à¤ à¤¨à¤¡
Shiva telugu movie
Shiva reviews
Follow @fullhyderabad
Follow fullhyd.com on
About Hyderabad
The Hyderabad Community
Improve fullhyd.com
More
Our Other Local Guides
Our other sites
© Copyright 1999-2009 LRR Technologies (Hyderabad), Pvt Ltd. All rights reserved. fullhyd, fullhyderabad, Welcome To The Neighbourhood are trademarks of LRR Technologies (Hyderabad) Pvt Ltd. The textual, graphic, audio and audiovisual material in this site is protected by copyright law. You may not copy, distribute, or use this material except as necessary for your personal, non-commercial use. Any trademarks are the properties of their respective owners. More on Hyderabad, India. Jobs in Hyderabad.