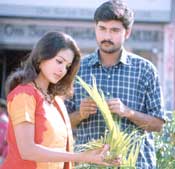 One of the few times you don't feel comfortable about being treated like royalty is when you are reaching the ticket counter at a theater. The guys at Parameshwari can't believe their luck, and, unsure even after you've paid that you are actually going to get in and watch this flick, even give you a personal escort. And then comes the best part - a whole movie screening exclusively for you!

Rendu Gundela Chappudu is 132 scenes for the price of just one movie ticket, and what's more, the scenes even come in a suggested order of viewing. But that's where all resemblance to conventional cinema ends. The film brilliantly mirrors the emerging sociological reality in our state as it shows just how accessible movies now are even to the most underprivileged sections of society - not to watch, but to make.

Rendu Gundela Chappudu is a film made for all people who have an IQ of 2.75, or at least appreciate the output of those who do. It has so many clichés, we had to use a special computer to keep track of them. The flick starts with college kids Chakri and Anu falling in love with each other - Anu because she likes Chakri's sincerity, humility, docility, ductility, viscosity, serendipity, gratuity etc. (it was difficult to say anything from his expressions), and Chakri because Anu is female and thereby meets his standards.

Unfortunately Anu is heiress to a lot of wealth, and her foster dad Bhavani Shankar doesn't like her flipping for a pauper like Chakri - if he had to settle for a non-actor as a son-in-law anyway, he might as well choose from the several rich ones in Tollywood! And so, he plants Chakri in a drug case and packs him off to jail. Incidentally, every time you see a cliché in this film, if you also say bunka-chaka-punka-laka, you'll also come up with the soundtrack for this film. 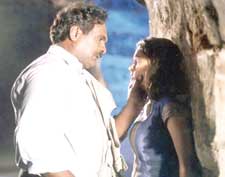 Chakri is released 3 years later and, itching for revenge and a chance to prove that he is more than just a pretty face, joins an ex-goon as trainee, and soon gets a contract to rob Bhavani Shankar's house itself. At the same time, Bhavani Shankar's family astrologer tells him that either he or his foster daughter Anu is going to die in 24 hours ("Hi, this is your family astrologer! To hear about your death, press 1. To hear about your daughter's death, press 2. If you want to hear a freakin' sickmalion movie script, press 3. Calls once made cannot be cancelled - hee hee!!!"). Bhavani Shankar is on the verge of becoming CM, and decides that he'll pass this on to his daughter. And so hires a contract killer Shahji to finish Anu off.

This guy needs all the hype he can get from the others in the cast to impress, since by himself he's a clown who thinks a bottle of Woodward's Gripe Water is funny. The second half of the movie revolves around him trying his best to be the most stereotyped villain ever, as he plays with his prey, her boyfriend and your will. The ending comes as a surprise, since you are starting to think that the movie will never end. 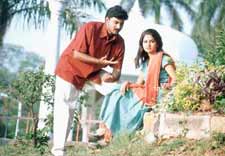 It's unbelievable that someone actually thought up a movie like this. It reminds you continuously of those one-room DD plays of the late 70s, and is made on such a low budget, you're actually worried every time they move from one location to another. And the pace makes the serials on ETV and Gemini look like Star Wars. We suppose it's a fundamental right to be able to make a movie, but making people watch horror like this is nothing short of a con job, and there's gotta be some consumer law or at least a provision for a class action suit.

ADVERTISEMENT
This page was tagged for
Rendu Gundela Chappudu telugu movie
Rendu Gundela Chappudu reviews
release date
Bhagavan, Swapna Madhuri
theatres list
Follow @fullhyderabad
Follow fullhyd.com on
About Hyderabad
The Hyderabad Community
Improve fullhyd.com
More
Our Other Local Guides
Our other sites
© Copyright 1999-2009 LRR Technologies (Hyderabad), Pvt Ltd. All rights reserved. fullhyd, fullhyderabad, Welcome To The Neighbourhood are trademarks of LRR Technologies (Hyderabad) Pvt Ltd. The textual, graphic, audio and audiovisual material in this site is protected by copyright law. You may not copy, distribute, or use this material except as necessary for your personal, non-commercial use. Any trademarks are the properties of their respective owners. More on Hyderabad, India. Jobs in Hyderabad.