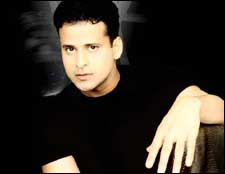 Ghazala Rizvi / fullhyd.com
EDITOR RATING
3.0
Performances
Script
Music/Soundtrack
Visuals
NA
NA
NA
NA
Suggestions
Can watch again
NA
Good for kids
NA
Good for dates
NA
Wait for OTT
NA
Hi, I am Aditya - an ad-man. While I try hard to screw up most of Prahlad Kakkar's show-biz theories, I remain hung on the central question - why, after Satya and Shool, did I sign up for this flick? Anyway, what is done can't be undone (as you'll realize within 15 minutes of placing yourself inside the theater), so here I am, ready to take you through a roller-coaster ride across a twisted love story, emotional drama, murder mystery, thriller... Well, Deepak is an intellectual director (read, made 2 box-office flops), and like water in a rain-swollen dam, ideas just don't stay contained in his brain.

So, I am Aditya. Let me introduce you to the other members of the cast who'll contribute in unmaking your next 3 hours. Neha (Shilpa Shetty) is my medical practitioner wife, who is beautiful, intelligent and taller than me. If it was not for her height, we could have continued to see eye-to-eye with each other and lived happily ever after. But Deepak was adamant about trying a twosome with these sisters, and I was too down-the-Carrey-Street to protest.

Ria (Shamita Shetty) plays my love-interest in Fareb. She is a murdered business tycoon's widow. She likes drowning her grief in pub-hopping and in sporting micro-bikinis, but mostly through a psychological catharsis by sleeping with other women's husbands.

There are a couple of other characters vital for filling your vagrant attention. Sonia, a long-legged siren, works in the same agency as I do. Her nature of work also resembles mine - servicing the client to total satisfaction, as Ria's dead husband could have vouched for. Then there is Siddhartha, one of the stakeholders in Ria's company, and who tries to play the red herring in the thriller part of the movie.

Kelly Dorji (Kelly Dorji) is a detective who is hot on some trails. Deepak could never sort out what he wanted his shaven-head cop, who looks directly picked out of Kung-Fu-Hustle, to do. So Kelly just hangs around, near telephone booths, shops, offices and electric poles.

Fareb is, as you must have guessed, about me. Six years into my marriage, and I was all set for a couple of last flings before I settle down into the homely chores. Also, my love scenes with Neha were going nowhere; what man can continuously pretend to enjoy the love-act when all his wife's responses were confined to an asinine grin on her face?

So when Ria contracts with my agency, I become an informal part of the deal. We make hay under her silk-sheets, and pray for onscreen heat and some box-office returns. But I don't enjoy the hangover all this gives me, a part of which has to do with my having a wife and a kid, but which is largely due to the double duty hours that I now have to keep.

I go to Ria's house to give her some logic on morality and fidelity, but end up taking a practical in Kamasutra. I go there again, with the same intent, and end up in the same bed. However, on the third visit she manages to keep her hands off me - she is already murdered. Here Kelly gets a chance to say a few words while putting the handcuffs on me.

From now on, the movie will be classified as a who-done-it, and all I have to do is to sit around and brood. My wife takes up the case in her own hands, though she herself can't make a claim to being an actress. Aided by our advocate Milind Mehta (a very out of tune Milind Gunaji), she tracks down a mysterious photographer, and saves my neck from the noose.

I will like to put this infidelity episode behind me, but more importantly, to bury the film's print. But Deepak says that there is a number by Shamita in hot pants, a rain-dance in a halter-top, and a swim-dance in lingerie - which will at least carry him to his next blockbuster.

Here's my final word - buy the music of Fareb, by Anu Malik, which serendipitiously is great, and please, when you think of me, never remember me for Fareb.
Share. Save. Connect.
Tweet
FAREB SNAPSHOT

ADVERTISEMENT
This page was tagged for
fareb full episode download
Fareb hindi movie
Fareb reviews
release date
Manoj Bajpai, Shilpa Shetty
Follow @fullhyderabad
Follow fullhyd.com on
About Hyderabad
The Hyderabad Community
Improve fullhyd.com
More
Our Other Local Guides
Our other sites
© Copyright 1999-2009 LRR Technologies (Hyderabad), Pvt Ltd. All rights reserved. fullhyd, fullhyderabad, Welcome To The Neighbourhood are trademarks of LRR Technologies (Hyderabad) Pvt Ltd. The textual, graphic, audio and audiovisual material in this site is protected by copyright law. You may not copy, distribute, or use this material except as necessary for your personal, non-commercial use. Any trademarks are the properties of their respective owners. More on Hyderabad, India. Jobs in Hyderabad.