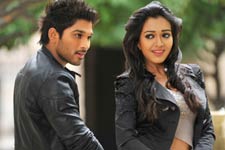 Deepa Garimella / fullhyd.com
EDITOR RATING
5.5
Performances
Script
Music/Soundtrack
Visuals
8.0
5.0
7.5
8.0
Suggestions
Can watch again
No
Good for kids
No
Good for dates
Yes
Wait to rent it
Yes
Our movies can be very unpredictable. For instance, you can never guess which stunning outfit the heroine will wear in the scene in which the hero is telling the fair north-Indian Telugu-speaking-with-a-strange-north-Indian-accent villain that HE WILL FINISH OFF ALL HIS HENCHMEN, who are throwing themselves at the hero one after another so that they can get killed sequentially.

Also, it's impossible to predict the exact nano-second at which the customary item song will occur in the movie. Or the exact number of bones the hero will break. Or the exact bank balance of the rich scumbag politician.

You have to give Tollywood the credit it is due.

Iddarammayilatho is as unpredictable. It is basically like a packet of Lays. Glossy packaging, and lots of air. And if you grope hard enough, there's a measly handful of the same thing that has been fed to you for decades. It doesn't satiate you, but you make do with it.

The movie is as typical and generic as they get. However, to its credit, it's entertaining, to an extent.

Now for the story. Akanksha (Catherine Tresa) is a girl who you must take pity on. As a rule, she only speaks baby-talk. Worse, she speaks to herself a lot. And she can't talk at a volume lower than the average noise level at a football stadium. Plus, she is unaware of man's second biggest invention - clothing. This very adorable Akanksha, who has just landed in Spain to study, finds a diary in the room she moves into.

The diary describes the love story of Komali (Amala Paul) and Sanju Reddy (Allu Arjun). Komali is am orthodox Brahmin girl (read: she wears jasmine in her hair, dresses in langa-voni wherever she goes, speaks in a "hilarious" accent, and she is trained in both Indian classical music and dance), who has come all the way to Spain to learn to play the violin. Apparently, the guru there is one of a kind (when you see that he's played by Brahmanandam, you realize what they're saying). Sanju is a totally chilled-out guy (read: he has spiked hair, plays the guitar, and dances on the street).

The two hit it off, sing songs etcetera, and after a century of jokes involving her music teacher, are getting ready to get hitched. However, Komali is in possession of something really deadly, and this puts her life in danger. Looming in the background is a mining scam, some rich villains and masked gunmen.

If this is a thriller, there's not enough substance in the "thriller" part of the story; it's just something that is shown in literally every Telugu film. If this is a love story, then it should have had more romance. The Amala Paul - Allu Arjun track is cute, with a couple of good moments, and deserved more screen time than this.

The makers fill the gaps with violent action scenes dragged out in slow motion. Innovative as their filming may be, you kind of get the drift after a while, and begin to get impatient.

The writing is fun in places. Puri Jagannadh gives you some tongue-in-cheek scenes and lines, like when he says that movies have been defaming the Reddys of Rayalaseema. And more notably whenever he makes Sanju insist that men aren't the sexual predators that women make them out to be. But the wit is sparse.

There's one thing you notice about Iddarammayilatho, and that is Puri Jagannadh's sense of style. The film is beautifully shot, and it's not just about the foreign locales. Like we said, the fights are stylized, too. In addition, the music is pretty good, and easy on the ears. Thanks to these two departments, the songs turn out really well.

Apart from zipping around and defying gravity, Arjun is also effortlessly expressive, through drama as much as through humour. Despite the film's overall predictability, he is easily given its best moments, and its best lines.

Amala Paul is good, wears nice clothes, and emotes well. She has reached the next level of all aspiring Tollywood actresses - she's ready for an R S Brothers ad now. On a serious note, this lady should be given some serious meat in her films.

Catherine Tresa (spelt as Teresa in the credits) has had a raw deal. The character she plays is supremely irritating, lacking grace, sense and any semblance of maturity. Tresa was clearly asked to overact her way through this, and she gladly obliged. It's not without reason that you root for Sanju when he keeps putting her in her place. For instance, unappreciative of her fashion sense and her hot-pants inclination, he once yells at her, "Pant esko! Choodaleka chastunnamu." You agree.

Ali and his afro fail to make you laugh. The Ali-Brahmanandam track is plain morbid. Ramesh, Shawar Ali and Subbaraju are the other prominent faces in the movie. Tulasi hams as usual, and Nasseer speaks incomprehensible Telugu.

In all, Iddarammayilatho is regular Tollywood fare. You won't tell your grandchildren about it, but you could watch it once if you have time to kill. Try and keep the kids away, though, because of the violence.
Share. Save. Connect.
Tweet
IDDARAMMAYILATHO SNAPSHOT 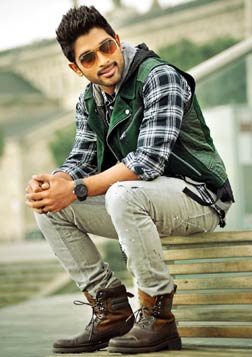 See Iddarammayilatho full details
TOP COMMENT
pranav on 31st May 2013, 7:32pm | Permalink
I don't understand why this movie got rating of 5.5, it doesn't deserve, there is no story , couple of songs are good..allu dance in few songs are good, comedy is worst. my rating would be 2/10(1 for all dance and other one for few scenes)
7
2
IDDARAMMAYILATHO USER REVIEWS
1 - 8 OF 8 COMMENTS
POSITIVE  |  NEGATIVE |  NEWEST  |  OLDEST  |  MOST HELPFUL  |  LEAST HELPFUL
USER RATING
1.0
1 USER
Performances
Script
Music/Soundtrack
Visuals
NA
NA
NA
NA
Can watch again - NA
Good for kids - NA
Good for dates - NA
Wait to rent it - NA
Ravikumar on 3rd Jun 2013, 5:50pm | Permalink
gotta admit that catherine is gorgeous...but wasted in a dumb bimbo role. hoping to see a more matured performance in krishna vamsi's 'paisa' :D
hnstrevwr on 2nd Jun 2013, 11:02pm | Permalink
movie is as pridactable as anyother telugu movie. Movies of puri was hit because of clever n family stories like amma naana n telugu amayi, idiot, itlu sharvani subramaniyam n pokiri.. never expected a flop like this frm such a hiped combo of puri, dsp n bunny.. so pathetic tht u cn ignore on tv.

ADVERTISEMENT
This page was tagged for
iddarammayilatho telugu full movie
Iddarammayilatho telugu movie
Iddarammayilatho reviews
release date
Allu Arjun, Amala Paul
Follow @fullhyderabad
Follow fullhyd.com on
About Hyderabad
The Hyderabad Community
Improve fullhyd.com
More
Our Other Local Guides
Our other sites
© Copyright 1999-2009 LRR Technologies (Hyderabad), Pvt Ltd. All rights reserved. fullhyd, fullhyderabad, Welcome To The Neighbourhood are trademarks of LRR Technologies (Hyderabad) Pvt Ltd. The textual, graphic, audio and audiovisual material in this site is protected by copyright law. You may not copy, distribute, or use this material except as necessary for your personal, non-commercial use. Any trademarks are the properties of their respective owners. More on Hyderabad, India. Jobs in Hyderabad.