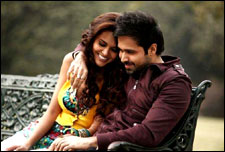 Nupur Barua / fullhyd.com
EDITOR RATING
5.0
Performances
Script
Music/Soundtrack
Visuals
6.0
5.0
5.0
7.0
Suggestions
Can watch again
No
Good for kids
No
Good for dates
Yes
Wait to rent it
Yes
Jannat 2 has nothing to do with the 2008 movie, Jannat, except, of course, that the producers, the director and the lead actor remain the same. Nevertheless, it has been promoted as a sequel to the movie that "made news by distracting Indians from the IPL". Given Emraan's mass following and the songs that always become hits, Jannat 2 will definitely pull in crowds, despite the IPL. The question is - will it outdo the first movie?

Sonu Dilli a.k.a. KKC / Kutte Kameeni Cheez (Emraan Hashmi) is from Delhi (and therefore the name). He sells guns illegally, for a man named Gulshan, and speaks with what can be presumed is a Delhi back-lane accent (which he forgets every now and then, but sticks to words like "biness" for business). He loves women and wine, and the life of a petty criminal suits him.

ACP Pratap Raghuvanshi (Randeep Hooda) is a drunken cop, whose only aim in life is to shut down the business of illegal arms dealings. He recruits a reluctant Sonu to act as his mole, and also to get close to the kingpin Tomar (Manish Chaudhari).

Sonu meets a doctor named Jhanvi (Esha Gupta), and instantly falls in love. A few songs follow, and she begins to show interest, too. Now he wants to be a decent man, for her sake, so that he does not have to lie to her about his whereabouts and his "biness".

The intermission comes with a twist, and life becomes difficult for Sonu. Throughout the movie, the bantering between Sonu and Pratap is enough to keep you awake, and even amused. The story, however, goes into a weird space, and most logic is thrown out of the window by the time you get to the end. The makers seem to be confused about the genre of the movie (is it a thriller or is it a romance?), as well as about the character of Sonu. In an effort to make Sonu endearing, they end up making him look weak.

The plot is convenient - a criminal with a heart of gold falls in love, and wants to reform. If the man he has to betray is so dangerous (the same man who cuts off his best gun-maker's hand because he is paranoid about his loyalty), then the stakes that Sonu has to manoeuvre his life around do not seem so high. The love of his life is never really in danger, and neither is his personal life. Why, then, would he want to assist a cop on the sly?

And when he does, he sails in and out of situations so smoothly that you know that a face-off is inevitable. When that happens, he does not seem to be much affected. The writers may have written about a common man who becomes a hero, but there is no transition or journey of the character, so the movie seems illogical.

Emraan Hashmi waits a while before kissing, for once. He does not feel up his co-star all the time, and even acts coy around her. As far as acting is concerned, he seems a little restrained, and even genuine in his portrayal of a small-town man.

Randeep Hooda is the star of the movie, definitely. He plays a disillusioned cop who has lost his wife, and the pathos that he portrays will touch a chord in the coldest heart.

Both Emraan and Randeep are at ease abusing all the time, and while that adds to their characters, at times they seem a little tired of it.

Esha Gupta, Miss India International 2007, does not have much to do. She speaks little, but makes an impact. Her acting skills are not highlighted as much as her cleavage is, but she seems sincere.

Manish Chaudhari as the villain is effective, but it takes some time to get used to his dialect. Nevertheless, he is more consistent with his language delivery than Emraan is.

Like most Vishesh Films movies, the music will do well, mostly thanks to Emraan Hashmi's popularity. Other than that, the melodies are uninspiring, and the videos are not shot all that aesthetically. The visuals, shot mostly in Delhi, are stunning in parts. Old forts and lanes add character to the most mundane plots, and the cinematographer has used them well.

Given that there is not much choice, Jannat 2 may be a decent option this weekend - just don't expect intelligent cinema, and you will be all right.
Share. Save. Connect.
Tweet
JANNAT 2 SNAPSHOT

ADVERTISEMENT
This page was tagged for
Jannat 2 hindi movie
Jannat 2 reviews
release date
Emraan Hashmi, Randeep Hooda
theatres list
Follow @fullhyderabad
Follow fullhyd.com on
About Hyderabad
The Hyderabad Community
Improve fullhyd.com
More
Our Other Local Guides
Our other sites
© Copyright 1999-2009 LRR Technologies (Hyderabad), Pvt Ltd. All rights reserved. fullhyd, fullhyderabad, Welcome To The Neighbourhood are trademarks of LRR Technologies (Hyderabad) Pvt Ltd. The textual, graphic, audio and audiovisual material in this site is protected by copyright law. You may not copy, distribute, or use this material except as necessary for your personal, non-commercial use. Any trademarks are the properties of their respective owners. More on Hyderabad, India. Jobs in Hyderabad.