Terminator 3 Rise Of The Machines Review

Making a good sequel is a huge task in itself, and making the follow-up to arguably one of the greatest sequels ever, Terminator 2: Judgement Day, requires a helluva lot of extra juice from the director. Jonathan Mostow, however, seems to have thought that meant a few more cartons of Tropicana.

When human brain cells die, they don't regenerate. But having fewer brains than you did ten years ago may not make a whole lot of difference in figuring out what's going on. Basically, Arnie gets in, says about 25 words and kicks some major butt. But that's what you're there to see right? Still, for those who want the story... 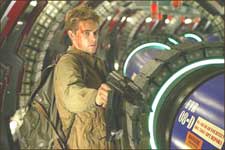 John Connor (Nick Stahl) is all grown up now, but lives "off the grid" - no phone, no address, basically no means of tracking him down. He meets Kate Brewster (Claire Danes), who he had a little 'thing' with in high school 13 years ago. The new and improved terminator, the T-X (Kristanna Loken), arrives with a wider mission - to terminate the people who become John's lieutenants in the future, in the fight against machines which are taking over the world. She's got a new bod (and what a bod it is), some new hardcore hardware and software, and a very, very limited vocabulary.

Pretty soon the protector T101 (Arnold) shows up, and you settle into your seat, smile contentedly and wait for it. And you don't have to wait long, for the action begins almost immediately. You have the classic mega-destructive car chase, and as in the contract, Arnie has to be put on a big bike as soon as possible, innit? 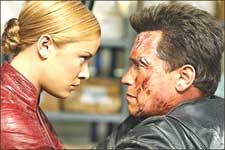 Meanwhile, Skynet, the evil computer network with a mind of its own, is uploading its version of take-over-the-world 2.2 - a computer super virus. The crazy little thing's blanking out whole sections on the security grid and messing up the Internet. Turns out Kate's dad is the key to the mystery, and he tells them what to do. The T101 gets a lot more talkative and spills quite a few beans in the process. Finally, it's upto John, Kate and T101 to take out T-X, stop Skynet and the rise of the machines and save the world and the future. Whew! But remember, it's called Rise, not Fall, of the machines.

I happened to watch this movie with great anticipation at a theater in Secunderabad. But the somewhat dull print and inexplicably jerky projection made the film look dated and softened the punch. For followers of the Terminator saga, scope for a lot of further heated debate is created when T101 reveals a lot of the future. There is a certain amount of past, present and future confusion, as is the case with most movies involving time travel. You have a vague Robocop/Matrix déjà vu in some parts, but it's all part of the fun. 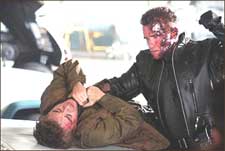 Nick Stahl does well as John Connor, but doesn't have the bite of Edward Furlong in T2. The nonchalant Furlong was the first choice, but an alleged drug problem (a la his screen mother Sarah Connor) kept him out of reckoning. Claire Danes does a decent job as well, though it's mainly kicking and screaming throughout. It's a little difficult to get used to the grown up Danes, after seeing her as the pretty young thing in Romeo And Juliet.

Kristanna Loken creates an image for herself as the T-X. But the character is not a patch on the look and feel of Robert Patrick's T1000 in T2. And for a supposedly much improved version, the T-X doesn't seem to have half the sense God gave a beetle's backside. Loken does a good job, though, considering the limited histrionic demands of her role. 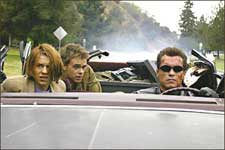 But Arnold Schwarzenegger is real cool. In his mid fifties, it's amazing he still has the body for this. And he still looks every inch the man. His character's developed some social skills since we saw him last, picked up some elementary psychology and, whaddaya know, some emotion too! The one-liners are still in place, but most of them are throwbacks to T2, with definite references to the classics in that movie.

ADVERTISEMENT
This page was tagged for
Terminator 3 Rise Of The Machines english movie
Terminator 3 Rise Of The Machines reviews
release date
Arnold Schwarzenegger, Nick Stahl
theatres list
Follow @fullhyderabad
Follow fullhyd.com on
About Hyderabad
The Hyderabad Community
Improve fullhyd.com
More
Our Other Local Guides
Our other sites
© Copyright 1999-2009 LRR Technologies (Hyderabad), Pvt Ltd. All rights reserved. fullhyd, fullhyderabad, Welcome To The Neighbourhood are trademarks of LRR Technologies (Hyderabad) Pvt Ltd. The textual, graphic, audio and audiovisual material in this site is protected by copyright law. You may not copy, distribute, or use this material except as necessary for your personal, non-commercial use. Any trademarks are the properties of their respective owners. More on Hyderabad, India. Jobs in Hyderabad.