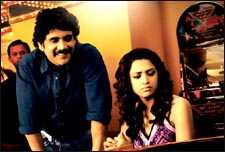 Deepa Garimella / fullhyd.com
EDITOR RATING
6.0
Performances
Script
Music/Soundtrack
Visuals
8.0
5.0
7.5
8.0
Suggestions
Can watch again
No
Good for kids
No
Good for dates
Yes
Wait for OTT
No
As Kedi begins to catwalk its way past you in all its glorious oomph, it succeeds in getting that lingering interested glance from you, and maybe even a "hello" waiting to be to be turned into a chat. And by way of conversation, Kedi is no Stephen Hawking, but hooks you on. Only until the next hot thing turns up, however.

Make no mistake; this is a film that is self-confessedly old wine in a new bottle - by the admission of the lead actor himself in a promotional interview. So while it won't teach you lessons of life, it's a bottle that knows what it's doing.

Ramesh (Nagarjuna), a con man, narrates his life's story to an ACP (Sayaji Shinde) who has finally caught him after years of being dodged. Ramesh grew up learning all the wrong lessons from a rather bitter childhood. He had a mean and slanderous father (Tanikella Bharani, in a tiny appearance), and his teenage sweetheart had rejected him because he's not been to school and can't make money.

Years of thieving later, he and his sidekick Arshad (Harshavardhan) land in Goa where they make a killing by stealing, gambling and smuggling. Their acquaintance with the don Chandra (Ankur Vikal) leads them through the rest of the story.

The plot is engaging for a pretty long time, but slackens in the second half. Still, Kedi is a story well-told, with slick editing and technical values. There's no over-dramatization or contrived gut-wrenching dialogue even given the theme, and that makes it a rather easy watch.

And which is probably one of the things that makes it less than an explosive watch. There's no single striking dialogue or plot twist along the way that you can say is a flash of ingenuity. Another casualty is the humour. The light-hearted tone of the film has you expecting some thigh-slapping material, but surprisingly, there's no dedicated comedy except for a couple of dialogues and even fewer scenes involving Brahmanandam. Also, Kedi has an excessive emphasis on style at some points, compromising on the story.

The performances go with the spontaneity of the story-telling. However, on the whole, this is a Nagarjuna film, radiating superstardom in a measure that makes the flaws in the script seem somewhat acceptable. Nagarjuna, Sayaji Shinde and Ankur Vikal deliver spotless performances. Mamta Mohandas isn't in the meatiest of roles, but she's pretty refreshing to watch somehow.

Most of the film has been shot in Goa and its casinos and bars - a factor that over-urbanizes the flick, alienating the audience sometimes. The cinematography is quite sophisticated, though, and is partly responsible for keeping the thrills alive. Add to it the glamour and styling of the lead actors, and what you have on hand is a rather decidedly chic product.

The music is largely techno-ridden. Kedi's signature tune is catchy and Sandeep Chowta uses it quite deftly to help narrate the story. A few of the songs do have fairly long-lasting capability.

In all, Kedi is a well-dressed flick whose key side-effect is Attention Deficit Disorder. Watch it if you don't mind running the the risk.
Share. Save. Connect.
Tweet
KEDI SNAPSHOT

pokiriboss on 15th Feb 2010, 11:17am | Permalink
Just saying movie is "bad" doesn't explain why it is bad. The movie review has enough explanations to say why it was a good movie.


Pros: Nag lookin Good (Im a straight male and a homophobic -- so imagine how gud he looks), Anushka item song
Cons: Anushka limited to a single song , and basically 21896318 other factors

telugumovielover on 14th Feb 2010, 5:42am | Permalink
definitely a different movie, not a run of the mill telugu movies we see everyday...give it a chance.


Pros: nagarjuna, nagarjuna, and nagarjuna
Cons: story takes a beating in 2nd half

ADVERTISEMENT
This page was tagged for
Kedi telugu movie
Kedi reviews
release date
Nagarjuna, Mamta Mohandas
theatres list
Follow @fullhyderabad
Follow fullhyd.com on
About Hyderabad
The Hyderabad Community
Improve fullhyd.com
More
Our Other Local Guides
Our other sites
© Copyright 1999-2009 LRR Technologies (Hyderabad), Pvt Ltd. All rights reserved. fullhyd, fullhyderabad, Welcome To The Neighbourhood are trademarks of LRR Technologies (Hyderabad) Pvt Ltd. The textual, graphic, audio and audiovisual material in this site is protected by copyright law. You may not copy, distribute, or use this material except as necessary for your personal, non-commercial use. Any trademarks are the properties of their respective owners. More on Hyderabad, India. Jobs in Hyderabad.