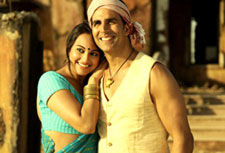 Nupur Barua / fullhyd.com
EDITOR RATING
5.0
Performances
Script
Music/Soundtrack
Visuals
5.0
4.0
4.0
6.0
Suggestions
Can watch again
No
Good for kids
Yes
Good for dates
No
Wait to rent it
Yes
Farah Khan, in an effort to promote her husband's second film, has been screaming herself hoarse about how "clean" and "family-friendly" Joker is - which may explain why Akshay and Sonakshi have not been a part of the promotions, and why the theatres are probably running less than half-full. It is believed that most of the people involved in the making of the movie, including the lead actors, were upset that Shirish Kunder had promised them a 3D film and changed his mind the last minute.

Whatever the controversies and publicity stunts, including the song "I Want To Fakht You" ("fakht" now replaced with "just"), Joker is a joke that falls flat on its face and leaves you with a belly-ache caused by lack of laughter.

Agastya (Akshay Kumar) is a NASA scientist, who has been trying to communicate with aliens for a long time. He is ridiculed by his superiors, and is therefore depressed. When he comes home, his "friend" Diva (Sonakshi Sinha) tells him that his father is seriously ill, and that he needs to go home to his village in India immediately. She insists on tagging along, too, because she is curious about why she has never heard of his family before.

In a montage straight out of Swades, the couple takes a flight, a train, a bus and then an auto, to get to the self-sufficient village named Paglapur, the place of Agastya's childhood. Apparently, it once housed the biggest mental asylum of British India, and in the chaos leading to Independence, remained forgotten and off the map. The villagers are descendants of the original patients, and therefore not right in the head.

Turns out that Agastya's father (Darshan Jariwala) was pretending to be ill, because he wanted his son home. He is a cuckoo of a man, but then so are the others - the German-fearing English-Hindi translator teacher (Asrani), the big beefy man with a head of lead (Vindu Dara Singh), the man who thinks he is a king (Sanjay Mishra), and Babban (Shreyas Talpade), Agastya's younger brother, who speaks only gibberish (a tribute to Tusshar in Golmaal?).

Paglapur has no water and no electricity, and Agastya visits the powers that be, to plead for the development of the village. He is refused, and Agastya then comes up with a brilliant (according to Shirish Kunder) idea - he makes crop circles in the fields and before you can say "Jadoo", Paglapur becomes the hub of the decade - media vans roll in first, then the scientists, and then tourists and politicians. All seems well till Simon Goeback (Alex O'Neill), Agastya's colleague and rival, makes an appearance, determined to prove that alien sightings are a part of a ploy crafted by Agastya.

Things get more ridiculous after this, with educated media people taken in by men painted in green and decorated with vegetables and fruits, army commandos making an appearance in tanks, and the FBI (yes, from the USA) landing up to rescue Simon Goeback from the clutches of aliens.

The concept may be a rather unusual one, but to translate it into a movie is not something that the director seems equipped to do. The story is bland and incredulously outlandish, with no apology made for the obvious lack of logic (how does Agastya's fancy computer work without electricity; how does Sonakshi receive a call and understand what Babban has to say about his father; how are the scientists convinced that all this is not a hoax; and the FBI, really?!)

Akshay Kumar looks bored and listless. And Sonakshi is arm-candy, again, despite her convincing intensity in the first few scenes. Shreyas Talpade shines, without saying a single comprehensive sentence.

The rest of the cast spend too much time trying to be seriously funny, all in vain. A special mention must be made of Alex O'Neill who takes his role as the seriously evil American very, well, seriously, and does a credible job.

Besides "Kaafiana", the song that features Chitrangada Singh in her first "item number", none of the songs or the background music makes an impact.

Cinematography is strictly okay. Besides the glow-worm lamps, and the dilapidated mental asylum, there is nothing in the production design that will catch your eye. Costumes are staid and quite illogical in some parts - such as Sonakshi's short skirts - but the inspiration from Lagaan is obvious.

Joker may be suitable for kids, but one doubts that children exposed to far superior films like ET, or even Koi Mil Gaya, will be overwhelmed by this movie. The only aspect they may enjoy is the part where an alien is created - a real lesson in art and craft. Watch Joker only if your kids insist on it.
Share. Save. Connect.
Tweet
JOKER SNAPSHOT 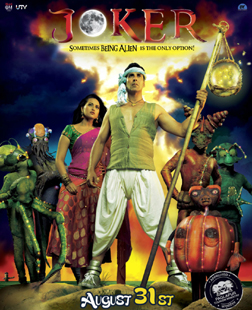 Another funny thing was that some of the people were still sitting in the movie hall after the movie was over, thinking that something more will happen.. BTW, the movie was only 1:45 min and that can be one of the reasons.

ADVERTISEMENT
This page was tagged for
Joker hindi movie
Joker reviews
release date
Akshay Kumar, Sonakshi Sinha
theatres list
Follow @fullhyderabad
Follow fullhyd.com on
About Hyderabad
The Hyderabad Community
Improve fullhyd.com
More
Our Other Local Guides
Our other sites
© Copyright 1999-2009 LRR Technologies (Hyderabad), Pvt Ltd. All rights reserved. fullhyd, fullhyderabad, Welcome To The Neighbourhood are trademarks of LRR Technologies (Hyderabad) Pvt Ltd. The textual, graphic, audio and audiovisual material in this site is protected by copyright law. You may not copy, distribute, or use this material except as necessary for your personal, non-commercial use. Any trademarks are the properties of their respective owners. More on Hyderabad, India. Jobs in Hyderabad.