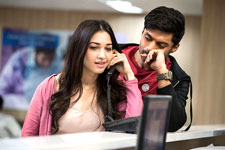 Kritika Deval / fullhyd.com
EDITOR RATING
2.5
Performances
Script
Music/Soundtrack
Visuals
4.0
2.5
6.0
5.0
Suggestions
Can watch again
No
Good for kids
No
Good for dates
No
Wait to rent it
Yes
Having just finished reading T H White's The Once And Future King, this writer is totally down with the use of grand destinies as plot devices. And while you don't expect millennial romcoms that use said device to have the gravitas of King Arthur and his Round Table, you really should be able to expect something more than a set of aesthetics roughly stitched together to make a 2-hour-long video montage.

Naa Nuvve is just so many clichés put into a blender and poured out onto the silver screen that you'd think the writers' research consisted of a foray into the clickhole called TV Tropes. Tamannah plays Meera, the ultimate Manic Pixie Dream Girl, who believes that her persistent bad luck has taken a turn for the better when, after coming across a picture of our hero Varun (Kalyan Ram), which she found in a book called Love Signs that keeps following her around creepily, she passes an exam on the fourth attempt. She is "carefree", "bubbly", and an RJ who's running the radio version of an over-sharer's Facebook timeline.

Varun, on the other hand, is a stick-in-the-mud fuddy duddy, who sticks to logic in the most illogical ways, and really wants to go to Seattle. Yes, we get it. The makers of this film have seen a lot of chick flicks.

So, anyway, Meera, who is almost certainly certifiably insane, decides that Varun is her Destiny (Yes, we must capitalise), and then also decides that she must now stalk him, and pour out her rabid musings on love, and magic, and, as is mentioned over and over and over again, Destiny, on live radio. Varun, who is initially skeptical, decides to go along with it, and is all, "Let us part ways, for if it is indeed our Destiny, we shall meet again one day." And then he falls in love with her also. For no discernible reason.

In fact, so much of what happens in the film happens for no discernible reason that we spent rather a lot of enjoyable time constructing it out of whole cloth. We'd warn you about spoilers, but, really, you probably already know everything that's going to happen in this film.

See, they all live in Hyderabad, but seem like they are constantly going around in circles. So, let's say that the place they live in is some combination of Storybrooke from once upon a time, in that they live like they are in a story, and once in no one gets out, and Big Brother, who sees all and pulls the strings of his puppets from up top. Meera keeps coming across this creepy book, which is basically a brainwashing tool for the evil forces of Narrativium. She becomes obsessed and seeks out the object of her insensate affections, and while skeptical at first, Varun, who is a sane person with aims and goals being thwarted by aforementioned evil forces, goes along with this crazy female in hopes that she can be placated and will then leave him alone. But Narrativium is more insidious and is obviously being spread through Meera's angsting over the radio for her love and her Destiny and the pain in her heart, and he keeps coming across her until he too eventually succumbs, and they all live "happily ever after".

We'd pay to watch that. We paid to watch Naa Nuvve too, but it felt more and more under retroactive duress as the film went on. The plot is tiresome, and the people are tiresome, and Tamannah is always some extreme of cheerful or anguished and Kalyan Ram is always "serious" and broody. The writers seem to be under the assumption that if they can't write enough dialogue then they can just take ten lines they came up with and have people say them in different and increasingly dramatic words. Tanikella Bharani is tolerable in that is character is not pumped with unbearable amounts of drama. The rest of the cast is basically just there.

The music is pleasant, but is horribly placed, and you're better off listening to it online. The cinematography is mostly tedious and often bizarre, full of unnecessary CGI used for strange pretexts.

Naa Nuvve, against all expectations, is basically a film schooler's recreation of Serendipity mixed up with a hundred other chick flicks and a thousand more tropes. Anything you might want to watch this film for, you'll probably find done better in another. Watch those instead. This writer shall go back to Wart's adventure to remind herself that good writing does, in fact, exist.
Share. Save. Connect.
Tweet
NAA NUVVE SNAPSHOT 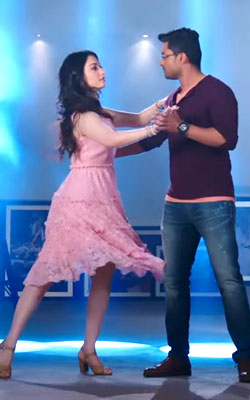 ADVERTISEMENT
This page was tagged for
naa nuvve movie online movierulz
naa nuvve review fullhyd
Naa Nuvve telugu movie
Naa Nuvve reviews
release date
Follow @fullhyderabad
Follow fullhyd.com on
About Hyderabad
The Hyderabad Community
Improve fullhyd.com
More
Our Other Local Guides
Our other sites
© Copyright 1999-2009 LRR Technologies (Hyderabad), Pvt Ltd. All rights reserved. fullhyd, fullhyderabad, Welcome To The Neighbourhood are trademarks of LRR Technologies (Hyderabad) Pvt Ltd. The textual, graphic, audio and audiovisual material in this site is protected by copyright law. You may not copy, distribute, or use this material except as necessary for your personal, non-commercial use. Any trademarks are the properties of their respective owners. More on Hyderabad, India. Jobs in Hyderabad.