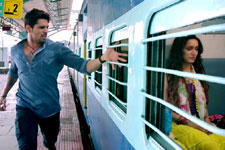 Ravi Kandala / fullhyd.com
EDITOR RATING
4.0
Performances
Script
Music/Soundtrack
Visuals
5.0
3.0
7.0
5.0
Suggestions
Can watch again
No
Good for kids
No
Good for dates
No
Wait to rent it
No
Take these characters: a hardened criminal whose life is turned upside down when he meets a beautiful girl, the beautiful girl who receives a new lease of life due to the reformed killer, and a psychotic serial killer who stabs his victims and then sits next to them narrating the story of his life and telling them that he feels no happiness, just a strange sense of comfort.

Now make the serial killer turn the criminal's life upside down, and pit the killer and the criminal against each other. Imagine the thrill of the chase and the sheer adrenaline that the confrontation should send through the audience.

Salivating in anticipation of an awesome thriller? Well, now add some typical Balaji serial twists to it and kill half the excitement, and then add some typical Bhatt tragedy to it to kill the remaining excitement. Ladies and Gentlemen - that is Ek Villain for you.

Among Ek Villian's many problems is being a victim of too little, too soon. The film starts off with a tragedy, and the suspense is revealed soon after - the expected thriller element dies right there. It's also a victim of too little, too late. The dramatic confrontation between the hero and the villain happens right before the interval, resulting in curiosity as to what the second half will bring, but it does not live up to the promise.

In typical Bhatt style, none of the tracks in the movie has a happy ending, and the body count in the climax makes it seem like an attempt to wrap up the movie. There are also many pointless scenes that are seemingly there for character building, but the only thing they build is the length of the movie.

Several points also defy logic - like Siddharth Malhotra identifying the killer by the virtue of a paper flywheel in the hands of a kid. How many thousands of those do they sell in Mumbai every day? It is not like the one in the hands of the kid had any special identification marks either. Also, bringing someone back from death to give them more pain and then wanting to kill them one scene later does not make much sense.

Siddharth Malhotra plays the hardened criminal with a perpetual frown. And for someone introduced with plenty of hype as a killer who can force the government to expand the cemeteries, he kills two people through the length of the movie. Shraddha Kapoor plays the angel who is facing death herself and wants to bring happiness to many others before she dies. In true Balaji style, though, she does not appear one bit like she's dying - always perfectly made up, ticking things off her bucket list, and showing the thumbs up signs with perfectly manicured nails even while going into an MRI scan.

Riteish Deshmukh plays the serial killer with a calm demeanor which gives the role a very menacing edge. However, Twitter superstar Kamaal R Khan grates. What might have seemed like a clever ploy on paper to bring a much-hated character in the real world and put him in a hate-able character on screen backfires miserably. Aamna Sharief plays a good nagging wife but is hardly given anything to work with, while Prachi Desai's item number seems forced.

The film is burdened by its excellent soundtrack to a large extent. What should've been a cat and mouse chase is slowed down by Mohit Suri's penchant for adding beautiful songs in situations that don't seem to deserve them as much.

Ek Villain is not the thriller its promos made it out to be. Go if you are the type that loves the forced angst and anguish depicted in the Bhatt factory films.
Share. Save. Connect.
Tweet
EK VILLAIN SNAPSHOT 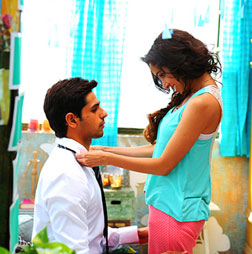 ADVERTISEMENT
This page was tagged for
Ek Villain hindi movie
Ek Villain reviews
release date
Sidharth Malhotra, Riteish Deshmukh
theatres list
Follow @fullhyderabad
Follow fullhyd.com on
About Hyderabad
The Hyderabad Community
Improve fullhyd.com
More
Our Other Local Guides
Our other sites
© Copyright 1999-2009 LRR Technologies (Hyderabad), Pvt Ltd. All rights reserved. fullhyd, fullhyderabad, Welcome To The Neighbourhood are trademarks of LRR Technologies (Hyderabad) Pvt Ltd. The textual, graphic, audio and audiovisual material in this site is protected by copyright law. You may not copy, distribute, or use this material except as necessary for your personal, non-commercial use. Any trademarks are the properties of their respective owners. More on Hyderabad, India. Jobs in Hyderabad.