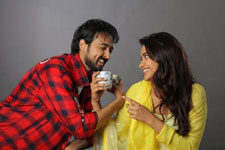 Chaitanya Karthik / fullhyd.com
EDITOR RATING
2.5
Performances
Script
Music/Soundtrack
Visuals
3.0
2.0
2.0
3.0
Suggestions
Can watch again
No
Good for kids
No
Good for dates
No
Wait for OTT
No
In case you are unaware of the practice of "forced marriages", it is a social evil prevalent in relatively lawless places like Bihar where men are wedded to women at gunpoint without their (the men's) consent. It's hardly ever discussed, and the gravity of the situation the affected ones find themselves in is rarely focused on in the media.

So when a movie is made on an issue like that, one would assume that it would make a decent effort at highlighting the menace. Unfortunately, Sab Kushal Mangal only pretends to care, and ends up making a complete mockery of the very subject it aims to explore.

The story is set in Karnalgunj in Jharkhand, where the politician/goon Baba Bhandari (Akshaye Khanna) is into the business of getting local men forcibly married to women who cannot afford dowry. Pappu Mishra (Priyank Sharma) is the host of the TV show "Musibat Odh Li Maine", and he does it justice when he exposes what Baba Bhandari is doing. Understandably, that pisses Baba off.

So what would the angry man who has made a living out of forcing men into marrying girls do with Pappu? You guessed it right - he kidnaps Pappu to marry him off to Mandira (Riva Kishan).

Now even though Mandira's family is having trouble finding a suitable man for her, apparently everyone in her vicinity falls in love with her. At first sight. Baba Bhandari is no exception, and he too gets smitten by her when he sees her. And we find ourselves bracing for a love triangle.

The comedy works sort of well during the first few minutes of the movie, and you think it will only get better. Sadly, the jokes go downhill fairly soon. They aren't organic and feel forced, and before you know it you develop a distaste for the entire movie. These gags would have worked a couple of decades ago, but appear way too regressive now. The greatest joke of the movie is its subject - forced marriages - which ends up being depicted as a safe haven for parents who can't afford dowry. That's a sad state of affairs.

The whole romantic triangle schtick is also deeply rooted in silliness and tediousness, and you can hear your brain yelling that kuch bhi kushal mangal nahi hai.

The writers evidently didn't care much for any of the characters apart from that of Baba Bhandari, just like how they didn't care much for the issue they wanted to tackle. Akshaye Khanna does a great job as usual when it comes to his acting, but he leaves you wondering why he would okay a script like this. The debutants Priyank Sharma and Riva Kishan, children of Padmini Kolhapure and Ravi Kishan respectively, are decent in their roles, but you can clearly see that they are acting the part instead of being it. But there's only so much one can do with characters written in mediocre fashion.

Satish Kaushik and Supriya Pathak are good in their respective roles, but considering that they are actors with way more potential, you can't help but feel that they have been underutilized here.

The visuals look like the producers were on a shoe-string budget, and end up further diminishing the value of a story that hardly has any value. The songs, too, make an already painful movie even more so, and the background score is too loud. And as far as the editing goes, well, the whole movie should have been edited out, really.

Watch Sab Kushal Mangal only if you have a fetish for silly humour laced with crass jokes or if you have enough mental strength to deal with two hours of PJs being shoved down your throat. 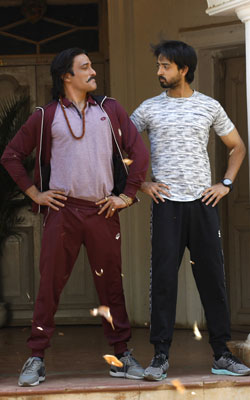 ADVERTISEMENT
This page was tagged for
Sab Kushal Mangal hindi movie
Sab Kushal Mangal reviews
release date
Akshaye Khanna, Priyank Sharma
theatres list
Follow @fullhyderabad
Follow fullhyd.com on
About Hyderabad
The Hyderabad Community
Improve fullhyd.com
More
Our Other Local Guides
Our other sites
© Copyright 1999-2009 LRR Technologies (Hyderabad), Pvt Ltd. All rights reserved. fullhyd, fullhyderabad, Welcome To The Neighbourhood are trademarks of LRR Technologies (Hyderabad) Pvt Ltd. The textual, graphic, audio and audiovisual material in this site is protected by copyright law. You may not copy, distribute, or use this material except as necessary for your personal, non-commercial use. Any trademarks are the properties of their respective owners. More on Hyderabad, India. Jobs in Hyderabad.