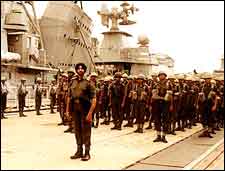 Rohit Murari / fullhyd.com
EDITOR RATING
5.0
Performances
Script
Music/Soundtrack
Visuals
NA
NA
NA
NA
Suggestions
Can watch again
NA
Good for kids
NA
Good for dates
NA
Wait for OTT
NA
There was a boy, a small boy who made ad films until providence intervened and he made one of the biggest blockbusters in the history of Indian Cinema, Gadar. Then he made The Hero, which just about managed to find the life-raft while other movies struggled in the open sea. So, okay, puberty was not a very pleasant time in his life, but he got through. With Ab Tumhare Hawale Watan Saathiyo we know that, in his teens, he is not going to, um..., score with more than one girl, and only if his parents get them hooked up.

Ab Tumhare Hawale Watan Sathiyo suffers the curse of the temporal warp, i.e. a movie more suited to a different era, that before Border. It is all fine to use soldiers and military equipment but in the galaxy we live in there is still such a thing as a story. We do not expect it to be great (we stopped doing that since Sholay), but does it necessarily have to feature Bobby Deol in a double role?

Amarjeet Singh's (Amitabh Bachchan) family profession is laying down their lives for their country. They do it in inimitable style, too - blabbering loads of super-pseudo unintelligible crap to the men under their command. Really, the very act of the men not dropping off is sheerly due to the training they must surely have received.

Thankfully, all that changes when Kunal Singh (Bobby Deol) comes along. He believes more in the theory of peaceful co-existence - you don't send me into battle and I won't give you any reason to. Basically, he fafs around all day chasing away the one woman, Saakshi (Sandhali Sinha), who has lost enough of her marbles to fall for him, and go after the one woman, Shweta (Divya Khosla), who has not spent enough time with him to go bananas to ditch her husband, Rajeev (Akshay Kumar).

But, this is a movie. And, Kunal is our hero. There occurs an event, so blatantly ridiculous that he is transformed into a patriot par excellence. He still does not talk much. He does not even think much. In fact, he even wins a medal using clandestine means. Otherwise, he is the best son of soil the country has ever produced.

From now on, the movie has only one way to go - straight down - and it takes all the time in the world, and reels in Bollywood doing it. There are the customary war scenes, with unheard of acts of heroism and valor from the audience. Amidst bullets whizzing past Kunal and explosions missing him with horrifying precision, the longest song in Indian Cinema (all of 21 minutes!) plays in (gratefully) three installments, a novel idea indeed.

1. This appers to be the first film to have even attempted to showcase the Indian Navy in any manner to date - even the likes of the so-called badshahs (the Johars and the Khans etc.)of the film industry have not dared to capture the essence of our fine warships at sea.

2. The film shows efforts to maintain authenticity. All uniforms, formations, unit/regiments mentioned are accurate and authentic. The jargon used during the naval sequence is authentic. Maybe the computer generated submarine sequence was a bit tacky, but you cant fault Anil Sharma on the surface navy shots.

3. The plot has been lambasted as being weak. i would like to know why it is imperative for every film to send back a brooding and deeply introspective audience? i thought films also had some entertainment value. OK, so Anil Sharma did not cut costs on clothing (baring) his heroines and did not waste footage on lip-locks and hip-thrusts - has this eternal folly robbed his film of all credit for entertainment? Seems so...

4. More on the plot.. I thought the story held together much better than most of our films put together. If the reviewer felt "befuddled", then he probably went for a late night show or else is dyslexic. The plot is clear enough - it is a progressive narrative which does not need any specila mental abilities to comprehend. In fact, the weaving in of various characters is quite well done at places.

5. The film has its moments of brilliance in the stunts department. While the actual story may have a few far-fetched coincidences, let us grant the film-maker that liberty and enjoy - as the promos say - the thrilling Amarnath Yatra sequence...

6. Given the multitude of characters, the director has managed to amply characterrise every one of the roles, the outstanding ones being that of Danny and Akshaye. His portrayal of the humane side of Pakistan patriotism is frank and almost real.

7. Anil Sharma has also clearly brought out that it is actually a handful of fanatics on either side which are responsible for the strife. And finally, Mr. reviewer, if the two countries need to improve relations, what better way than to come together to combat the common enemy - terrorism?

ADVERTISEMENT
This page was tagged for
???????.?????.???.??????.????.??.??????.???
the ab tumhare hawale watan sathiyo movie in hindi hd downloadl
ab tumhare hawale watan sathiyo movies
Ab Tumhare Hawale Watan sathiyo movie download 123mkv
123mkv Ab Tumhare Hawale Watan Sathiyo
Follow @fullhyderabad
Follow fullhyd.com on
About Hyderabad
The Hyderabad Community
Improve fullhyd.com
More
Our Other Local Guides
Our other sites
© Copyright 1999-2009 LRR Technologies (Hyderabad), Pvt Ltd. All rights reserved. fullhyd, fullhyderabad, Welcome To The Neighbourhood are trademarks of LRR Technologies (Hyderabad) Pvt Ltd. The textual, graphic, audio and audiovisual material in this site is protected by copyright law. You may not copy, distribute, or use this material except as necessary for your personal, non-commercial use. Any trademarks are the properties of their respective owners. More on Hyderabad, India. Jobs in Hyderabad.