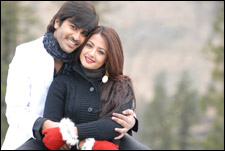 Deepa Garimella / fullhyd.com
EDITOR RATING
3.5
Performances
Script
Music/Soundtrack
Visuals
8.0
3.0
5.0
4.5
Suggestions
Can watch again
No
Good for kids
No
Good for dates
No
Wait for OTT
Yes
Kalyan (Sharwanand) is the complete anti-thesis of his righteous, sensible, composed brother, Chakravarthy (a tired looking Mohan Babu). Most probably, he's also the complete anti-thesis of you. Because hopefully, you're not the kind who would burn your own car just because your brother won't buy you one more. Plus, hopefully, you've not starred in Raju Maharaju.

Chakravarthy, a saintly business tycoon with an equally virtuous wife Ramya (Ramyakrishna), loves his brother Kalyan to bits, but is wondering whether he's being a good boy. Prompted by the dozens of chalaans sent to their house by the city traffic police every month, he hires a detective (Brahmanandam) for the purpose.

It's not because he doesn't trust Kalyan, he explains - it's just that he wants to check on him. That sounded very complex to us. Maybe because we just saw the first fight of the film by Chakravarthy - after the intellectual levels of that, anything seems complex.

The detective's findings, of course, are gagged by the good-for-nothing Kalyan, which suits Chakravarthy's blindly loving nature well. Kalyan is now busy falling in love with this goody-two-shoes Sneha (Surveen Chawla). She, however, always looks at him like he's something the dog spat out. At this, Kalyan arranges for her to fail in her exams, supposedly using his influence.

Any normal girl would have immediately fallen for Kalyan - with contacts like that, she could go places! But Sneha still makes faces like he forgot to bathe, and Kalyan really stops bathing by now - it's because he's crazily in love. Ramya feels sorry for him and pleads with Sneha to make him feel better. Sneha agrees, but soon, Kalyan is involved in a hit-and-run case, and unknowingly kills Sneha's father.

The mess turns gooey now. Sneha's shows her fury by demanding and getting the whole of Chakravarthy's property in return for Kalyan's release from prison. She turns cold and calculating from then on, not leaving a single stone unturned in insulting Kalyan and his entire family, who are now working almost at chaprasi levels at various places to keep their setup going.

Meanwhile, Kalyan's family members are falling over themselves in order to flood one another with affection and kindness in this crisis. This is how Kalyan learns that love is greater than anything in this world - including money, a sexual harassment case, all your certificates, your kidney, and human pharmaceutical testing.

He also learns a secret about the tattoo on his brother's arm, that no one saw coming. What's more, Sneha was only pretending to take revenge to teach Kalyan a lesson, because she loves him. Anyone who didn't see that coming deserves to sit through the entire film.

Raju Maharaju has an overdose of melodrama, hackneyed dialogues, and a lot of other things that will make you rush to watch reruns of your aunt's favourite sob-opera on TV to recover. The whole revenge bit is overdone, like the way she gets someone to slap on him a sexual harassment case at his office.

The visuals and the scipt seem tired, but the performances are really good - Ramyakrishna has a fantastic tear-jerking scene towards the end. Sharwanand's character seems like a poor cousin of what he was in Gamyam. He's good and cute enough, though he tends to look a little lost in places. Mohan Babu's dialogues are intended only for the front-benches. There are comedians, too, but nothing they do is worth the trouble.

One of the songs is playing on FM all the time, and it's the only one good to listen - Chakri's music is otherwise lacklustre mostly. Along with that ridiculous cowboy song with a blond Sharwanand.

A film that opens with an abandoned baby with a tattoo on its arm has only one way to go. And it's going to go there alone.
Share. Save. Connect.
Tweet
RAJU MAHARAJU SNAPSHOT

See Raju Maharaju full details
RAJU MAHARAJU USER REVIEWS
1 - 1 OF 1 COMMENTS
POSITIVE  |  NEGATIVE |  NEWEST  |  OLDEST  |  MOST HELPFUL  |  LEAST HELPFUL
chandrakanth on 29th Jun 2009, 12:48am | Permalink
I saw the programme in TV9 which was telecasted today at around 8-8.30 pm..and i was really got involved in that..of course i have not seen the movie but listening to that i came to know about the movies subject...my eyes filled with tears...just bcoz the story resembles my story..may be its coincidence.. but its true..me working as postdoc in germany...alone struggled a lot cum up to this stage ..i was loving my brother nagaraj very much..he is addicted to alcohol ..he is just 25 years old now... i struggled a lot till now and still struggling to get out him from that addiction....and almost i had spent 3 lakhs till now for his MBA course..but he left in between and now just sitting at home ...and at home eveyone are struggling to get out of him from that....me alone earning for the family and there is no option for me to be with them...as i have to earn for them...dont know GOD should help...so i am suggesting him to watch that movie so that atleast 1 % if he understands then that will be a great help for me....thanks to movie makers for the realistic subject ...though i have my things shorter...i believe..its enough
LEAVE A COMMENT
fullhyd.com has 700,000+ monthly visits. Tell Hyderabad what you feel about Raju Maharaju!
MORE MOVIES
Latest Reviews
Jayeshbhai Jordaar
Sarkaru Vaari Paata
Doctor Strange In The Multiv...
Ashoka Vanamlo Arjuna Kalyan...
Runway 34
more
Heropanti 2
Acharya
Kanmani Rambo Khatija
Jersey (Hindi)
K.G.F. Chapter 2
Beast (Telugu)
Ghani
Fantastic Beasts: The Secret...
The Contractor
The Lost City
Contemporary Reviews
Current
Nachav Alludu
X-Men Origins - Wolverine
Paying Guests
X-Men Origins - Wolverine (H...
more
New York
Terminator Salvation
Zor Lagaa Ke Haiya
Boni
Kal Kissne Dekha
Kirkit
Naa Style Veru
Team - The Force
Kavya's Diary
Random Reviews
Me Myself and Irene
Bad Company
Harry Potter And The Chamber...
Mumbai Matinee
Swaraabhishekam
more
Zinda
Predators (Hindi)
The Devil's Double
Srimannarayana
Do Nawab Hyderabad Ke
Autonagar Surya
Masaan
Kung Fu Yoga
Jurassic World: Fallen Kingd...
Thoota (2019)
SEARCH MOVIES
Dissatisfied with the results? Report a problem or error, or add a listing.
ADVERTISEMENT
SHOUTBOX!
{{todo.name}}
{{todo.date}}
[
ip{{todo.ip}}
]
{{ todo.summary }}... expand »
{{ todo.text }} « collapse
First  |  Prev  |   1   2  3  {{current_page-1}}  {{current_page}}  {{current_page+1}}  {{last_page-2}}  {{last_page-1}}  {{last_page}}   |  Next  |  Last
{{todos[0].name}}

ADVERTISEMENT
This page was tagged for
Raju Maharaju telugu movie
Raju Maharaju reviews
release date
Sharwanand, Surveen Chawla
theatres list
Follow @fullhyderabad
Follow fullhyd.com on
About Hyderabad
The Hyderabad Community
Improve fullhyd.com
More
Our Other Local Guides
Our other sites
© Copyright 1999-2009 LRR Technologies (Hyderabad), Pvt Ltd. All rights reserved. fullhyd, fullhyderabad, Welcome To The Neighbourhood are trademarks of LRR Technologies (Hyderabad) Pvt Ltd. The textual, graphic, audio and audiovisual material in this site is protected by copyright law. You may not copy, distribute, or use this material except as necessary for your personal, non-commercial use. Any trademarks are the properties of their respective owners. More on Hyderabad, India. Jobs in Hyderabad.