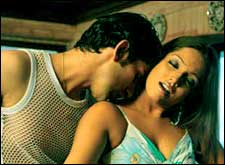 Rohit Murari / fullhyd.com
EDITOR RATING
1.0
Performances
Script
Music/Soundtrack
Visuals
NA
NA
NA
NA
Suggestions
Can watch again
NA
Good for kids
NA
Good for dates
NA
Wait to rent it
NA
Location: Cinema Hall
Time: T minus 5 minutes to T zero
Population: 117
Scene: NA
Report: Sparsely populated theater gives impression of good ticket sales by seating 32 people in the first row, and leaving the rest empty. Gentleman on left is subdued. Bloke on the right is confused. Guy in the middle is me, and he has a feeling he has no life if he actually counted the number of people watching the movie.

Location: Cinema Hall
Time: T plus 1 minute to T plus four
Population: 117
Scene: Mithun da on the screen in chains reserved for Gabbar Singh. Mutters something incomprehensible to the setting sun.
Report: Mithun Chakraborti playing Ramgopal Acharya, a saintly figure turned lunatic, has the audience mesmerized. Whistles and cat calls can be heard as far as Kolkata. Gentleman on left is cleaning specs. Bloke on the right just woke up.

Location: Cinema Hall
Time: T plus 5 minutes to T plus 14
Population: 117
Scene: For no reason, fathomable or unfathomable, Mithun da breaks into a dance to a song as inane as whatever it was that played. He is still chained, and his wrists and ankles are profusely bleeding.
Report: None. The reviewer just died for the duration of the catastrophe.

Location: Cinema Hall
Time: T plus 15 minutes to T plus 19
Population: 117
Scene: Pseudo-dressed Meghna Naidu decides to strut her stuff. In case anyone wanted to know anything beyond this objective of hers, she is Doli, a bar dancer.
Report: From Kaliyon Ka Chaman to Hawas to Classic, Meghna Naidu's hemlines have gone up and necklines gone down in a big way. Gentleman on left is happy he cleaned his specs.

Location: Cinema Hall
Time: T plus 22 minutes to T plus 75
Population: 117
Scene: Suraj and Doli have sex.
Report: 116 people are happy. Guy in the middle is mentally disturbed. 53 minutes of, ummm, 'action', and that with clothes on! How do they do it?

Location: Cinema Hall
Time: T plus 76 minutes to T plus 80
Population: Floating
Scene: Intermission
Report: Junta seems inordinately dissatisfied for a Mithun movie. Guy in the middle thinks may be it is because the script is pathetic, the acting pitiful, and the songs fulminating. Is hit by moment of enlightenment, and he realizes that such is the case with every Mithun movie. Re-theorizes. Junta is unhappy because Mithun da has as much screen time as Saurav Ganguly spends at the batting crease.

Location: Cinema Hall
Time: T plus 81 minutes to end
Population: 53
Scene: Suraj and Doli don't have sex anymore. Acharya fantasizes that Doli and he do.
Report: What for the audience? They still get to see a naked woman prancing about. Gentleman on the left has left. Bloke on the right is clapping. Guy in the middle is ruminating - why should he not make a movie himself? All it takes is about 16 reels of celluloid, 15 of which show a woman in various stages of undress. A mass-line here and a mass-line there, Mithun da in agony and suffering, and voila!

ADVERTISEMENT
This page was tagged for
Classic hindi movie
Classic reviews
release date
Mithun Chakraborty, Meghna Naidu
theatres list
Follow @fullhyderabad
Follow fullhyd.com on
About Hyderabad
The Hyderabad Community
Improve fullhyd.com
More
Our Other Local Guides
Our other sites
© Copyright 1999-2009 LRR Technologies (Hyderabad), Pvt Ltd. All rights reserved. fullhyd, fullhyderabad, Welcome To The Neighbourhood are trademarks of LRR Technologies (Hyderabad) Pvt Ltd. The textual, graphic, audio and audiovisual material in this site is protected by copyright law. You may not copy, distribute, or use this material except as necessary for your personal, non-commercial use. Any trademarks are the properties of their respective owners. More on Hyderabad, India. Jobs in Hyderabad.