From Tom Sawyer to George Bush's campaign managers, there's been no shortage of people who've made some pretty sorry stuff look good. Into the same class fall K Raghavendra Rao and A Kodanda Rami Reddy. For, Okato Number Kurraadu is a product smacking of experience in Tollywood: an experience that tells you that sticking to time-tested formulae and packaging your stuff well works pretty fine with your specific audiences, irrespective of the cast.

As a movie, Okato Number Kurraadu sucks. That's because it has nothing new by way of a script, remorselessly follows an earlier movie by the same filmmakers, has no stuff that you'll remember 5 minutes after the film ends, and casts in the lead a patently unremarkable guy. But what it is finally is a slick presentation with professional production values, and colorful and classy visuals. If working at the box-office is what matters, then it's game, set and match to the duo. 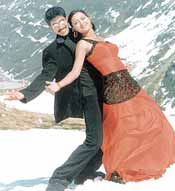 Okato Number Kurradu looks very much like Student No. 1 (check out even the name), the movie that the same pair made for the other scion of Tollywood's first family. Set in Vizag, the film has Balu (Taraka Rathnaa), a student, falling head over heels in love with Swapna (Rekha), his classmate. And to woo her, he first shows his macho side by single-handedly beating up half a dozen well-built goons (incidentally, Taraka Rathnaa weighs about 65kg at 6 feet), and then his socially responsible side by galvanizing the entire student body of Vizag to save the honor of a co-student.

Swapna is bowled, but has promised her parents that she will marry only someone of their choice, and so won't budge. So Balu's friends, without his knowledge, intercept a photograph being sent to her of her would-be husband, and replace it with that of Balu. Swapna's thrilled, and it's fun for the couple. But the game is soon discovered, and Swapna's dad (Tanikella Bharani) comes marching to the college with a dozen goons. And as expected, Balu bashes 'em all up single-handedly, and claims his prize from a repentant dad.

Taraka Rathnaa simply does not have the build, the charm or the screen presence that the role demands. The film is full of various characters in the cast praising his looks, which only makes it apparent that all of the crew is conscious of his looks, and is using the Chinese lie route out of it. If stardom is coming to you on a platter, the least that you can do is look the bit. Hasn't this guy ever heard of a gym? It's nobody's case that a hero should be good-looking or well-built, but he should look the part he's playing. When you're going to be shown single-handedly bashing people up by the dozen, the least you can do is look like you can bash one guy up. This guy looks emaciated. 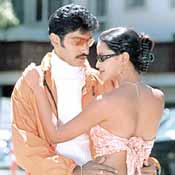 As for his emoting, he does okay at all the dialogues that require powerful rendition, which any aspiring actor knows is the easiest part of acting - and that's about it. While he's okay in the dances, his stunts are amply supported by powerful sound effects and your imagination.

Rekha is good in what she has to do, which isn't too much. She looks pretty good, like all heroines in Raghavendra Rao movies do. The comic cast, with Sunil, Giribabu, M S Narayana etc. in it, is totally wasted. The creativity that normally characterizes the Tollywood funtrack is completely missing. The music by Keeravani is average.

Like we said, this is strictly an open-shut movie that does no one any credit - it's been made to make money and launch a star son, and it'll do both. What make it tolerable are the vibrancy and youthfulness that the color and the visuals bring to it, as in Student No. 1. What don't are the idolizing references to Balakrishna and NTR. A guy who's got a short-cut to facing the camera should at least have the self-respect to win his fans on his own steam, not by allegiance.

Finally, there's this particular scene where Balu heckles and shoves around a priest who's just giving advice, which is in exceptionally poor taste. It is the hero of the movie - the role model - doing it. Strange that it should be done by a guy who has only God to thank for everything he's got.
Share. Save. Connect.
Tweet
OKATO NUMBERU KURRAADU SNAPSHOT
See Okato Numberu Kurraadu full details
OKATO NUMBERU KURRAADU USER REVIEWS
1 - 10 OF 10 COMMENTS
POSITIVE  |  NEGATIVE |  NEWEST  |  OLDEST  |  MOST HELPFUL  |  LEAST HELPFUL
USER RATING
3.7
41 USERS
Performances
Script
Music/Soundtrack
Visuals
NA
NA
NA
NA
Can watch again - NA
Good for kids - NA
Good for dates - NA
Wait to rent it - NA
Karthik H on 3rd Nov 2002, 12:43pm | Permalink
The movie must have been named as OKATO NUMBER PICCHODU.I hope this is the right title for the movie.
RATING
2
Reviewer on 5th Oct 2002, 6:18am | Permalink
Letus buy a mirror and gift to him
RATING
2
Sameera Reddy on 24th Sep 2002, 6:12am | Permalink
Okata Numberu Blaaddu.(Blade)
RATING
2
Kiran on 22nd Sep 2002, 9:49am | Permalink
Vikram is exact. Huge risk..no...Its clear the movie is FLOP.
RATING
2
Gemini Vikram on 22nd Sep 2002, 12:54am | Permalink
Simply the HERO sucks. I think the producer is blind to invest money on this Zero.
RATING
2
Satyendra Kota on 21st Sep 2002, 5:23pm | Permalink
good songs but the story is some what weak
RATING
10
Amarnath on 21st Sep 2002, 2:33pm | Permalink
Commnets? for this movie? seeing itself is worse, thinking about is a repitition of mistake. Actaully film with new stars can be rated as NO STARS
RATING
2
Name on 20th Sep 2002, 6:10am | Permalink
Worst movie ever made anywhere in the world. Its desperate attempt to promote an useless actor to star. Gosh! where are we heading!! How can people ever tolerate when the Hindu priest being humiliated in movies. Could this film makers ever dare to do that for a chistian Father or Molslem priest??? I dont know the problem with the perticular class of film makers and kind of kicks they get just by degrading hindu priests in thier movies. SHAME on all Hindhus for allowing thing like this to happen.
RATING
2
Jeevan on 20th Sep 2002, 4:15am | Permalink
movie sucks!!!!one of the worst telugu movies ever made with worst actors we ever had in our tollywood.
RATING
2
Kapali Gholkar on 19th Sep 2002, 4:28pm | Permalink
Not a movie to be missed if you are planning for a suicide...all the best
RATING
2
LEAVE A COMMENT
fullhyd.com has 700,000+ monthly visits. Tell Hyderabad what you feel about Okato Numberu Kurraadu!
MORE MOVIES
Latest Reviews
The 355
83
83 - Telugu
Shyam Singha Roy
The Matrix Resurrections - H...
more
The Matrix Resurrections
Pushpa: The Rise - Hindi
Pushpa: The Rise
Spider-Man: No Way Home
Spider-Man: No Way Home - Hi...
Spider-Man: No Way Home - Te...
Chandigarh Kare Aashiqui
Akhanda
Satyameva Jayate 2
Ghostbusters: Afterlife
Contemporary Reviews
Law And Order
S P Jayasimha
Heartbreakers
The Party
Roller Ball
more
Wrong Number
Behind Enemy Lines (English)
Evil Dead 3 (Hindi)
Joy Ride
Raghava
Mitr (English)
The One (Telugu)
Jeena Sirf Mere Liye
Bobby
Random Reviews
Zulmi
Nishabd
Ekkadikelthundo Manasu
Ayya
No Smoking
more
Milk
Alladista
The Lion King (3D)
Abraham Lincoln - Vampire Hu...
Ramaiya Vastavaiya
White House Down
Vikramasimha - The Legend (3...
Welcome 2 Karachi
Moana
Ready Player One
SEARCH MOVIES
Dissatisfied with the results? Report a problem or error, or add a listing.
ADVERTISEMENT
SHOUTBOX!
{{todo.name}}
{{todo.date}}
[
ip{{todo.ip}}
]
{{ todo.summary }}... expand »
{{ todo.text }} « collapse
First  |  Prev  |   1   2  3  {{current_page-1}}  {{current_page}}  {{current_page+1}}  {{last_page-2}}  {{last_page-1}}  {{last_page}}   |  Next  |  Last
{{todos[0].name}}

ADVERTISEMENT
This page was tagged for
hotel hotel number kurradu music
Telugu okkato number kurradu mp3
okato number kurradu heroine
Okato Numberu Kurraadu telugu movie
Okato Numberu Kurraadu reviews
Follow @fullhyderabad
Follow fullhyd.com on
About Hyderabad
The Hyderabad Community
Improve fullhyd.com
More
Our Other Local Guides
Our other sites
© Copyright 1999-2009 LRR Technologies (Hyderabad), Pvt Ltd. All rights reserved. fullhyd, fullhyderabad, Welcome To The Neighbourhood are trademarks of LRR Technologies (Hyderabad) Pvt Ltd. The textual, graphic, audio and audiovisual material in this site is protected by copyright law. You may not copy, distribute, or use this material except as necessary for your personal, non-commercial use. Any trademarks are the properties of their respective owners. More on Hyderabad, India. Jobs in Hyderabad.