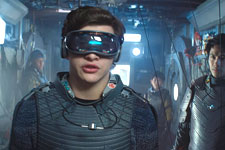 T J Reddy / fullhyd.com
EDITOR RATING
4.0
Performances
Script
Music/Soundtrack
Visuals
4.0
4.0
3.0
6.0
Suggestions
Can watch again
No
Good for kids
No
Good for dates
No
Wait to rent it
Yes
What is the one common aspect Batman, the '80s and visionary director Steven Spielberg share? Simple - these three seemingly unrelated entities have been elevated to a near-mythical status that makes criticising them not only tough but also futile. Not every story about / told via these three entities is genuinely great, but each of them carries enough clout to make them acceptable to a wider audience and critical community.

But what happens when all three of these units come together and stand on the shoulders of a novel that was termed as the holy grail of '80s nostalgia? Well, you get Ready Player One; a film whose reputation precedes it to such a degree that criticising it might be quite injurious to one's own reputation. But it is a cross we here are willing to bear.

Set in dystopian 2045, a world with a lack of food, water or housing, Ready Player One follows the life and times of Wade Watts / Parzival (Tye Sheridan), a young adult, who like almost every person in the known world, escapes to the Oasis to live a life he wants rather than the life he has. The Oasis is a virtual simulated world where one can be who he/she wants to be.

The creator of the ubiquitous Oasis, James Halliday (Mark Rylance), dies and leaves behind a riddle that holds the key (or should we say Easter egg) to his immense fortune and the Oasis itself. Parzival, Atr3mis (Olivia Cooke), Aech (Lena Waithe) and many a user of the Oasis spend their days trying to crack the riddle to prove to themselves that they both deserve control of the Oasis and know the infamous Halliday better than anyone else.

On the dark side, multi-billion-dollar company IOI and its head honcho Nolan Sorrento (Ben Mendelsohn) employ a whole host of players to win the game, find the Easter egg and make a few more billions for themselves because they are in it for the money, not the nostalgia.

On the third front is a group that is in it for both the nostalgia and the money. You can see them at work with their repurposing of classic posters and songs that are synonymous with a certain time. They use these references and callbacks to garner some cheap cheers from the pop culture nerds in the audiences while trying to blind them to the fact that this nostalgia-palooza lacks a dense story, characters or arcs. These people are the filmmakers. They do good work from time to time, but when they find a nostalgic cash grab that sells itself, they are not immune to resting on some premade laurels.

If you were to pull away the rampant nostalgic notes scattered across the film and the name Spielberg plastered on it, all you'd find is a YA tale that is no different than a run-of-the-mill Maze Runner film. While the other myriad of YA franchises painstakingly build their uninteresting worlds, Ready Player One doesn't try to do enough at explaining why the Oasis is as important as it is (even though the film opens with a near 15-minute exposition dump). As a person who has read the book, I know that the Oasis doubles up as a school, a workplace and a wholly unique political ecosystem whose undisturbed existence is imperative to the life of every human on this desolate planet.

When one takes this into account, the stakes set up are monumental and the tension of losing control of the world is very real because this isn't the destruction of the ground we stand on but an elimination of a world of personal expression. This is not the story you get with the film. The protagonists never really seem to care about the bigger picture, and all that the antagonists want to do is to sell pop-up ads and the much-maligned EA-style loot boxes. A story set in a world where only one's imagination is the limit has failed to be imaginative.

Ah, the irony is strong with this one.

See what we did there? We referenced a beloved franchise, but unlike a Family Guy cutaway gag, it adds to the point being made than being the point itself. Many of the film's references work the same way. While we don't intend on spoiling the reveals of many a beloved character who pop up from time to time, only a couple of them seem to be used to their full potential.

Not reaching their full potential, either, are the actors and the characters they portray. You'd be hard-pressed to write a paragraph about any of these stock characters. Whatever personality or uniqueness they may have had is lost amidst some tepid and convenient storytelling. Sheridan, Cooke, Mendelsohn and Pegg are all good to great actors, but none of them is given an arc that warrants much care.

As an example, the movie talks about how no one was able to crack the first puzzle for over five years, but once this puzzle is cracked, the next two are completed and the Easter egg is earned within about a week's time. Anyone who has played a video game knows that the levels get harder as you go on. And because the levels and struggles don't get harder, the journey and triumphs of the characters feel overwrought and unearned, respectively.

The film feels like a pizza full of great toppings, but it means nothing because as soon as you take your first bite, its base and sauce are stale.

This is not to say the movie lacks spurts of joy. Even a cheaply made horror film can trick you with a jump scare sooner or later. I was giggling like a child high on sugar while watching a specific musical choice added to a dance sequence and a specific car race that is truly spellbinding. The musical call-backs and recreated sets that mirror specific '80s classics almost help you forget the contrived scenes that led you there.

But then again, if you were to eliminate the '80s soundtrack, you'd be hard-pressed to hum a single bit of the film's original score. This isn't the land of Jaws or ET or Schindler's List - this is a land that takes from those and doesn't improve on them, and hence everything feels like a rehash where everyone is afraid to make their way into a brave new world. Irony: Part Deux when you consider the message the film is trying to send.

As the credits rolled and I began my walk out of the hall, I was reminded of Brahmanandam's Idly Vishwanath from Neninthe. That over-the-top depiction of a director says (and we are paraphrasing here) the public wants rage-fuelled dialogues, gut-wrenching emotion, earth-shattering battles and oodles of nostalgia. Even though that statement is true, we laugh at him because he fails to understand that what an audience looks for more than anything is a coherent story where we like and connect to characters and vicariously live through their journeys.

It is quite funny when an out-of-touch comedian does it in the context of parody but is jarring when a maverick master filmmaker almost does the same. And if you think we are talking out of an organ we can't specify, I ask you to re-watch War Horse and relive the schmaltz.
Share. Save. Connect.
Tweet
READY PLAYER ONE SNAPSHOT 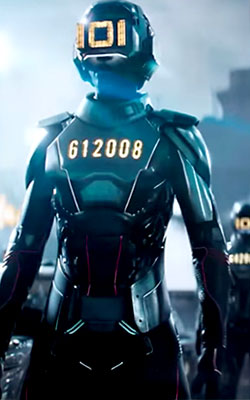 ADVERTISEMENT
This page was tagged for
Ready Player One english movie
Ready Player One reviews
release date
Tye Sheridan, Olivia Cooke
theatres list
Follow @fullhyderabad
Follow fullhyd.com on
About Hyderabad
The Hyderabad Community
Improve fullhyd.com
More
Our Other Local Guides
Our other sites
© Copyright 1999-2009 LRR Technologies (Hyderabad), Pvt Ltd. All rights reserved. fullhyd, fullhyderabad, Welcome To The Neighbourhood are trademarks of LRR Technologies (Hyderabad) Pvt Ltd. The textual, graphic, audio and audiovisual material in this site is protected by copyright law. You may not copy, distribute, or use this material except as necessary for your personal, non-commercial use. Any trademarks are the properties of their respective owners. More on Hyderabad, India. Jobs in Hyderabad.