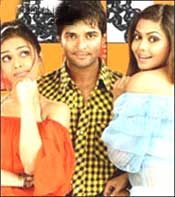 Deepa Menon / fullhyd.com
EDITOR RATING
1.0
Performances
Script
Music/Soundtrack
Visuals
NA
NA
NA
NA
Suggestions
Can watch again
NA
Good for kids
NA
Good for dates
NA
Wait for OTT
NA
There are only a few reasons why you'd want to watch this film:
1. A fellow insomniac recommended it.
2. You're one of the two persons, apart from his mother, who thinks Rakesh Bapat is cute.
3. You're the producer.
4. You were asked to review the film by a sadistic employer.

No matter what your motive, at some point during Wrong Number, you're going to reconsider your priorities in life and wonder if this is what it came to. You and the three other people in the audience (counting the usher) sitting in a darkened room and watching someone else's bad idea spool on unendingly.

Wrong Number - When Death Comes Calling - is a film about four young friends bound by their common love for pranks and their complete lack of any acting skills. Richa Pallod (whose last film Nuvve Kaavaali was watched by more than three persons) plays Mahi, a simple sweet girl who every now and then makes very smutty crank calls.

Accompanying her in this incredibly mature pursuit are her three friends - Aarti (Rinku Ghosh) who falls out of her every dress with much enthusiasm and to the ardent attention of no one; Karan (Pravin Dabbas), a studious guy who looks eternally pained about we know not what; and Monty (Vrajesh Hirjee), who is introduced as the group clown, so you'll know he's funny.

One day, on one their prank calls, the foursome meets their match - someone who is even more jobless than they are. Raj (Rakesh Bapat) is tall, handsome and a homicidal maniac. Oops, did we just give the suspense away? Now we suppose you won't be able to watch the film. You're welcome.

Of course, nobody knows the truth about Raj (these things rarely pop up in conversation with a guy) and he becomes a part of the group, in the process falling in love with Mahi. As a supreme proof of his love, he steals and reads her diary, and kills her dad.

Benjamin Gilani (her dad) plays a shrink in this movie. And if you ask us, he deserved to die, if only for prostituting his acting talent in this sordid manner. Gilani is also Raj's doctor, and does not display much enthusiasm, when consulted on the matter, about his daughter marrying Mr. Loony Killer (dads are strange that way). Understandably, Raj is upset.

Anyway, this murder of the dad is recorded on a CD. On a CD, you say incredulously? Look, if you're going to ask questions like this we'll have to frisk you for any common sense you might have sneaked into the theater.

When Aarti gets a hold of this crucial piece of evidence, she is also killed after exactly one dance of futile seduction and one swimsuit photo-op. Her uncle (Tinnu Anand, who's also obviously given up on reading the script before he signs a film) is later stabbed. Moral of the story - never call a killer, tell him you have the only proof against him, and expect to be repaid with a hymn of gratitude.

At this point the police catch on (remarkably fast for them) and decide to question the killer's next victim, who, to their luck and of course his own, survives. Monty, who is also a fashion photographer, happens to take a picture of the murder, and as a result, lands up half dead at the hospital. Though he is left alone for long periods at night so the murderer can come and finish the job, this doesn't happen.

As Monty lies comatose in hospital, Mahi is romancing Raj the Ripper. Karan suspects the identity of the killer, and confronts him unarmed in an isolated spot. Why? Because when you're in a movie like this one, you'll do anything to increase your mortality factor.

After beating the bejeezus out of each other, Karan and Raj go to fetch the damsel in distress. Mahi, with the aid of her uncanny womanly intuition, decides to bean her friend on the head with a bottle and drive off with the killer.

A confrontation in a Maruti, a rain-drenched chase through a construction site and a merciful gunshot later, the movie ends. But before you stagger home, warn the two people who are waiting in queue to go in for the next show. Consider it your random act of kindness for the day.
Share. Save. Connect.
Tweet
WRONG NUMBER SNAPSHOT

ADVERTISEMENT
This page was tagged for
Wrong Number Hero Name
rong nombar ful move
wrong number movie online hindilinks
Wrong Number hindi movie
Wrong Number reviews
Follow @fullhyderabad
Follow fullhyd.com on
About Hyderabad
The Hyderabad Community
Improve fullhyd.com
More
Our Other Local Guides
Our other sites
© Copyright 1999-2009 LRR Technologies (Hyderabad), Pvt Ltd. All rights reserved. fullhyd, fullhyderabad, Welcome To The Neighbourhood are trademarks of LRR Technologies (Hyderabad) Pvt Ltd. The textual, graphic, audio and audiovisual material in this site is protected by copyright law. You may not copy, distribute, or use this material except as necessary for your personal, non-commercial use. Any trademarks are the properties of their respective owners. More on Hyderabad, India. Jobs in Hyderabad.