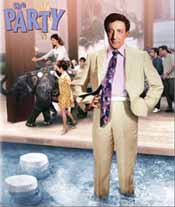 It's back in time to 1968, to a phenomenon called Peter Sellers. This man who perfected the art of mimicry and slapstick comedy to something much beyond an art, does it with flair here. This movie redefines the term "keeping one in splits", as the audience found the aisles rather insufficient for the rolling. Peter Sellers is better than a scream, he is silence personified. And the best part is that he plays an Indian!

Hrundi V Bakshi (Peter Sellers) is one helluva guy. He is hired to act the role of a dying soldier who trumpets out a warning of ambush to his mates. And the way he belts out the enactment with the melodrama only an Indian can muster is hilarious. The credits are yet to come and the laugh riot has set in to stay for a while. Bakshi finishes off the movie (the dying soldier one, not "The Party") with more chaos, all unintentionally rendered, of course. The producer, Mr. Clutterback, is told about a fiasco called Bakshi, and he scribbles down his name... on his party list. Again, unintentional. And lo! Bakshi is invited to the party of a man who would love to wring his neck. 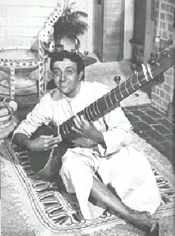 The chaos that ensues during the party is what the whole movie is about. Bakshi is lovable, and you get to adore his "wonnnerrfools" and the entire bag of mannerisms. He meets an All-American cowboy actor Wyoming Bill Kelso (Denny Miller), the host Fred Clutterback (Edward McKinley) and the hostess Alice Clutterback (Fay MacKenzie).

Bakshi being a teetotaller ends up tempting one of the waiters Levinson (Steve Franken) to guzzle down all his liquor, and now we are all set for pandemonium. Bakshi and Levinson weave a web of chaos with upsets and crashes and lots of other funny stuff. The timing is perfect, and the really silly stuff causes plenty of hilarity.

Bakshi meets a wannabe actress Michelle Monet (Claudine Longet), and the two are drawn together by each other's innocence and circumstances. But the chaos continues, with the stage set for total confusion. 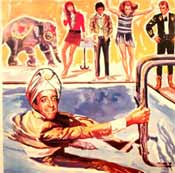 The director kind of loses it towards the end, introducing the Clutterback daughter and her gang of friends with a pachyderm thrown in for good measure. The chaos spilled over to the other side of the camera too, it seems. But finally when it all draws to a close with Bakshi dropping Miss Monet home, no one complains of excesses. After all, the movie is one big excess from beginning to end. And laughing a li'l too much never hurt anyone.

The flick is almost like a pre-talkie one. The dialogue is minimal, and whenever Bakshi opens his mouth, he says the strangest things in an even stranger accent. One dialogue, "We Indians don't think who we are, we know who we are!", was very popular with the audience!

ADVERTISEMENT
This page was tagged for
The Party english movie
The Party reviews
release date
Peter Sellers, Claudine Longet
theatres list
Follow @fullhyderabad
Follow fullhyd.com on
About Hyderabad
The Hyderabad Community
Improve fullhyd.com
More
Our Other Local Guides
Our other sites
© Copyright 1999-2009 LRR Technologies (Hyderabad), Pvt Ltd. All rights reserved. fullhyd, fullhyderabad, Welcome To The Neighbourhood are trademarks of LRR Technologies (Hyderabad) Pvt Ltd. The textual, graphic, audio and audiovisual material in this site is protected by copyright law. You may not copy, distribute, or use this material except as necessary for your personal, non-commercial use. Any trademarks are the properties of their respective owners. More on Hyderabad, India. Jobs in Hyderabad.