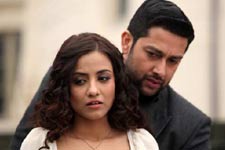 Ravi Kandala / fullhyd.com
EDITOR RATING
5.0
Performances
Script
Music/Soundtrack
Visuals
7.0
4.0
4.0
6.0
Suggestions
Can watch again
No
Good for kids
No
Good for dates
No
Wait for OTT
Yes
One of the signs that a franchise has achieved a modicum of success is when a famous scene in one of the movies plays out again and you hear a howl of recognition from the audience. If we apply that as a yardstick, 1920 - Evil Returns can be called a success, since the audience recognized quite a few similar scenes in 1920 and hooted loudly. Whether it was to approve of the original scene in the first film, or whether it was because they liked the scene in this one, was slightly hard to tell though.

The story of the movie is about Jaydev Varma (Aftab Shivdasani) and his love interest Smriti (Tia Bajpai). The pair has never seen each other, but has fallen in love through letters. However, Smriti is possessed by a ghost that does not allow her to meet Jaydev. Not wanting her lover to pine for her, Smriti lets Jaydev think that she is dead.

When Smriti finally musters up the courage to meet Jaydev, the spirit shows itself and causes an accident due to which she loses her memory. Jaydev finds her unconscious on the banks of a river, and takes her home, but does not know her past. The rest of the film is about how Jaydev defeats the spirit and how true love triumphs.

1920 - Evil Returns takes off in a pretty ho-hum manner, with the entire first half devoted to giving us a few cheap thrills. The first scare in the movie is pretty frightening, but after that, the film runs in a completely predictable pattern until the interval. If one scene is set in the morning with some boring dialogues or songs, the next scene is invariably set in the night with some scary event - this pattern repeats all through the first half. It is in the second half that the movie manages to redeem itself slightly, with a decently engaging story and a good-though-slightly-long-drawn climax.

If the movie manages to scare you even one bit, it is definitely due to Tia Bajpai. The girl can't act to save her life in the mushy/romantic scenes, but watch out for her when she acts possessed. Her make-up and prosthetics add to the scariness, but it is the sheer malice the girl projects that delivers some of the chills in the movie.

Aftab Shivdasani can't act - period. Vidya Malvade plays Aftab's sister in the movie, who is shown committing suicide (you are inclined to think it has something to do with the horrid hairstyle she is given). Sharad Kelkar has little to do - he comes, he dies, he possesses and dies again!

1920 - Evil Returns is produced by Vikram Bhatt and directed by Bhushan Patel, obviously a protégé - nay, a devotee of Vikram. He chooses the same genre as his mentor, watches the same DVDs as his mentor, and, if his first feature is any indication, chooses to deliver his thrills and scares exactly as his mentor does. The film is devoid of any originality, but then it is foolish to expect any. Vikram Bhatt seems to have ghost-directed large parts of the movie, and his stamp is clearly visible in several scenes.

The music is dispensable, with the songs all serving as loo-breaks. Amar Mohile's background score precedes the chills in the movie, telling us when to be ready to be scared.

Looking at the number of horror movies that Vikram Bhatt is directing/producing, and the similarities amongst them all, it only seems like he shot stock footage at his favourite locations once and keeps inserting it into all his movies on the editing table. The only horror, meanwhile, is that there could be a third movie in the 1920 series.
Share. Save. Connect.
Tweet
1920 EVIL RETURNS SNAPSHOT 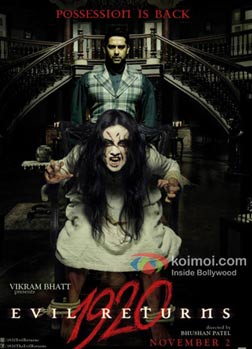 ADVERTISEMENT
This page was tagged for
afilmhit bad sister
Afilmhir
afilmhit home
1920 evil returns full movie afilmhit.com
1920 return full movie
Follow @fullhyderabad
Follow fullhyd.com on
About Hyderabad
The Hyderabad Community
Improve fullhyd.com
More
Our Other Local Guides
Our other sites
© Copyright 1999-2009 LRR Technologies (Hyderabad), Pvt Ltd. All rights reserved. fullhyd, fullhyderabad, Welcome To The Neighbourhood are trademarks of LRR Technologies (Hyderabad) Pvt Ltd. The textual, graphic, audio and audiovisual material in this site is protected by copyright law. You may not copy, distribute, or use this material except as necessary for your personal, non-commercial use. Any trademarks are the properties of their respective owners. More on Hyderabad, India. Jobs in Hyderabad.