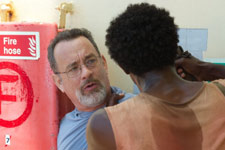 Kritika Deval / fullhyd.com
EDITOR RATING
7.0
Performances
Script
Music/Soundtrack
Visuals
8.0
5.0
7.5
6.0
Suggestions
Can watch again
Yes
Good for kids
Yes
Good for dates
Yes
Wait to rent it
No
In April of 2009, a band of pirates headed by a diminutive 18-year-old attacked and held hostage for 5 days, the American cargo ship M V Maersk Alabama. This was around 240 miles off of the Somali coast, and was big news, especially because apparently no American ship had been attacked by pirates for well over a century prior to the incident.

So, anyway, the attack happened, and the captain lived to tell the tale, and make big bucks off of it. And, he got Tom Hanks to play him. If that isn't a real sweet deal in exchange for having to play jump-rope with life and death, we don't know what is.

Although you now know the basic premise (and the ending, oops), there's more to it. In the movie, not only do you get to see lots of nail-biting and shaky action wherein the unarmed crew outwit a group of bloodthirsty sea bandits using sneaky and ingenious methods, but also, you get to delve deep into the circumstances that make young fishermen living on the coast of Somalia turn into pirates foraging the rough seas with rickety AK 47s on boats that clearly were not meant for rough sea foraging. Okay, just kidding. It is totally only that former thing.

Except for a bit in the beginning where antagonist Abduwali Muse (Barkhad Abdi) is introduced in his milieu, the film Captain Phillips is purely about American sailors who do all kinds of genius things to stay alive. Which is a pity because Abdi's histrionic skills and the fact Muse's odds were much worse seem to mean that his is the better story.

Anyhow, Phillips is the one who wrote the book, and Hanks is no slacker in the elastic face department. He plays the role of an everyman stuck in a situation he didn't bargain for, with the virtuosity of, well, a virtuoso, which is fortunate because the movie more or less rests on the premise that every single thing that happened on the ship during those pivotal days was excruciatingly important.

Not to cut the masterfully directed movie down to size, but the movie could've been cut down in size. 2½ hours is a tad too long for what is essentially a documentary (looks like one, talks like one, ergo!). Three things make it tolerable - Hanks' performance of a man gulping back the bile and taking control of his life, Barkhad Abdi and his amazing face that can show you the true meaning of life and death if you look long enough, and Greengrass' camera that snakes through their lives and sneaks about the whole place.

The action truly is gripping. Greengrass's trademark shaky-camera style not only helps keep it real, but also goes pore-deep into the action (you can literally count pores on people's skin). There are moments where the tension is so high you get the feeling that you could reach out and make it vibrate like a tuning fork, which is something Henry Jackman's soundtrack does.

Between the two of them, Hank and Abdi appropriate most of the film's meager quota of overt drama, leaving both Phillips' and Muse's crews to just go around playing hide and seek. Which, now that the movie's out and probably gonna win itself a Golden Globe and at least one Oscar nomination, is being hotly disputed by the real Captain Phillips' crew, who seem to feel he is actually kind of a dick.

Wait. What? You don't actually have to have been a hero in a pirate-attack situation to write about it and make millions? Now, where are my pirates? BRING ME MY PIRATES!!!
Share. Save. Connect.
Tweet
CAPTAIN PHILLIPS SNAPSHOT 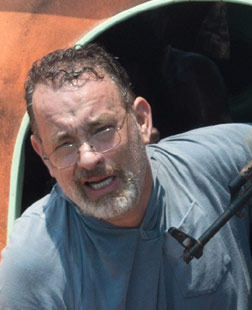 ADVERTISEMENT
This page was tagged for
Captain Phillips english movie
Captain Phillips reviews
release date
Tom Hanks, Barkhad Abdi
theatres list
Follow @fullhyderabad
Follow fullhyd.com on
About Hyderabad
The Hyderabad Community
Improve fullhyd.com
More
Our Other Local Guides
Our other sites
© Copyright 1999-2009 LRR Technologies (Hyderabad), Pvt Ltd. All rights reserved. fullhyd, fullhyderabad, Welcome To The Neighbourhood are trademarks of LRR Technologies (Hyderabad) Pvt Ltd. The textual, graphic, audio and audiovisual material in this site is protected by copyright law. You may not copy, distribute, or use this material except as necessary for your personal, non-commercial use. Any trademarks are the properties of their respective owners. More on Hyderabad, India. Jobs in Hyderabad.