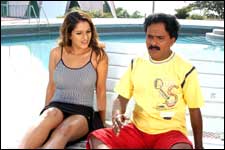 Krishna KBS / fullhyd.com
EDITOR RATING
1.0
Performances
Script
Music/Soundtrack
Visuals
NA
NA
NA
NA
Suggestions
Can watch again
NA
Good for kids
NA
Good for dates
NA
Wait to rent it
NA
Even Premabhishekam has some lessons that are worth paying attention to. While the original ANR film is considered a classic and treated as a textbook for directors aspiring to make a tragedy, this remix too offers some learning for directors - never make a movie that is all set to make a tragedy of your own life and career. A credit to the "creative team" is the fact that they succeed in 50% of what they try to achieve. But more on that 50% later.

Like a morsel is enough to know the taste of a dish, a couple of scenes from the movie will give an idea as to what the movie is, what it tries to be, who the target audience is, whether you still want to watch the film, how come the reviewer isn't in Erragadda after watching the flick and so on:

1. In one scene, Brahmanandam uses the song "Choopulutho guchi guchi" from Idiot, to praise Chakri, the music director (who happens to compose music for the present film too). As the music of the aforementioned song is a copy of Mika's, we can assume that the director and others in the "creative" team feel that copying is an art, and are proud of their achievement.

2. When Brahmanandam asks Venu Madhav whether he would prefer to have an 'A class' or a 'B class' or a 'C class' lamentation at his death, Ali makes Venu Madhav choose the C class thing. This is a dead giveaway as to who the target audience are.

Knowing these two things is the key to understanding this film, as the story of the film shows. Nageswara Rao (Venu Madhav) is a hypochondriac. He flees from a marriage with his obese cousin, and reaches the city. He falls in love with Sridevi (Priya Mohan), who immediately accepts his proposal, thereby showing that she was desperately waiting for just any guy to come and do the honors.

Her father agrees to the marriage on the condition that he earns Rs. 25 lakhs. Nageswara Rao, after some filmi attempts at earning money, finally lands a job in an ad agency, and earns the required amount.

However, Nageswara Rao now rather foolishly assumes that he has cancer, and tries to stay away from Sridevi. Meanwhile Jayasudha (Ruthika) falls in love with Nageswara Rao. She's the younger sister of Hari Bhai (Sri Hari), a mafia don, and he tries to get her to marry the love of her life. The movie plods mindlessly like a drunk on a highway hereon, and finally ends on an expected note.

Premabhishekam feels more like a TV show with gags of popular movies, which just get plain dull after the first 15 minutes. As the movie goes on for a good 2 hours after that, you are left with the feeling that you are watching a soap opera on TV, whose ending everyone except the characters seem to know. Altogether, it's a tedious film of the mindless, by the mindless and for the mindless and.

And as the director tried to create a mindless comedy, he probably is proud of getting 50% right.
Share. Save. Connect.
Tweet
PREMABHISHEKAM SNAPSHOT

ADVERTISEMENT
This page was tagged for
PREMABHISHEKAM TELUGU MOVIE
Premabhishekam telugu movie
Premabhishekam reviews
release date
Venu Madhav, Sunil
Follow @fullhyderabad
Follow fullhyd.com on
About Hyderabad
The Hyderabad Community
Improve fullhyd.com
More
Our Other Local Guides
Our other sites
© Copyright 1999-2009 LRR Technologies (Hyderabad), Pvt Ltd. All rights reserved. fullhyd, fullhyderabad, Welcome To The Neighbourhood are trademarks of LRR Technologies (Hyderabad) Pvt Ltd. The textual, graphic, audio and audiovisual material in this site is protected by copyright law. You may not copy, distribute, or use this material except as necessary for your personal, non-commercial use. Any trademarks are the properties of their respective owners. More on Hyderabad, India. Jobs in Hyderabad.