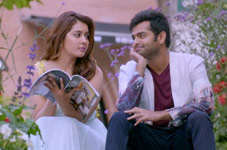 Ravi Kandala / fullhyd.com
EDITOR RATING
3.5
Performances
Script
Music/Soundtrack
Visuals
7.0
3.0
5.0
5.0
Suggestions
Can watch again
No
Good for kids
No
Good for dates
No
Wait for OTT
No
We'd mentioned earlier, while writing about Hora Hori, how we now pay extra care to censor certificates to see the runtime of movies. Well, that movie was 164 minutes long and elicited quite a few groans. Today, the first thing we noticed was that Shivam was 168 minutes long. We said our prayers immediately and hoped this would be better.

When the director hinted at a flashback about an hour after the interval, we realized it wasn't our lucky day. And when the said flashback began at around the 140-minute mark, it was game over. Because whatever type of movie you make, you just don't go into a flashback when the audience is waiting for the climax. Shivam had already lost steam and Saptagiri was making yet another irritating cameo, when the story moved into a flashback that was the mother of clichés.

The flashback involves two friends, inseparable from each other. Ram (Ram) and Shiva (unknown bit-part actor solely in the movie to die) play these boon companions, and when Shiva commits suicide because of a failed love story, Ram decides that the sole purpose of his life will be to unite lovers. One day, while fleeing on a train after uniting a pair of lovers, he sees Tanuja (Rashi Khanna) running in the fields shouting "I love you". He immediately falls for her and jumps off the train. He then stalks her relentlessly.

In the interim, he also beats up the son of Bhoji Reddy, a local bigwig in Jadcherla. Bhoji's goons are on the lookout for Ram while another goon (Abhimanyu Singh) is in search of Tanuja, who he believes to be his good luck. How the pint-sized Ram defeats all the goons, brings about a transformation in Bhoji Reddy and wins his lady love without the slightest amount of effort is showcased in Shivam in painstaking detail.

Shivam does a great job of showcasing almost everything that is wrong with the Telugu Film Industry (aka Tollywood). The film is ridden with clichés from the word go. The actors are as typecast as can be. Posani in the role of an eccentric, Abhimanyu Singh as a goon who gnashes his teeth only to become a bakra, Rashi Khanna as the girl with the deer-caught-in-headlights expression, Brahmanandam as a bakra, Srinivas Reddy as the hero's adulating lackey and Ram himself as the energetic young guy - there is barely anything new in Shivam. And all of them are as generic as they can be.

The film has so many subplots left midway that you wonder if the director changed in between. The reason why Posani is out to kill his son is never established. Bhoji Reddy's younger son, who Ram beats up, is never seen after that fight. Abhimanyu Singh's character is shown to be extremely superstitious, the type that will stop his car on rail tracks when someone sneezes and wait for 30 seconds before moving forward. The trait is shown twice in the first twenty minutes, and then forgotten about completely.

The other things appalling are the locational inconsistencies. The heroine is shown to be in Kurnool, yet the hero and heroine meet up in Café Latte in Hyderabad. The hero and heroine are shown to be in Goa, but the subsequent fight sequence happens in the Palm Exotica resort in Hyderabad. We wonder where the heads of those who were making this film were when they were making it.

Devi Sri Prasad's songs don't strike a chord mostly owing to the terrible placement. The title song and a couple of others pass muster. The film is decent technically, too.

Shivam is long and boring, period. Don't bother with this - better stuff will surely come along sooner than later.
Share. Save. Connect.
Tweet
SHIVAM (TELUGU) SNAPSHOT 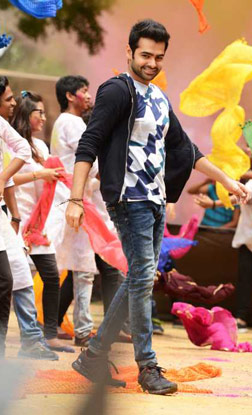 ADVERTISEMENT
This page was tagged for
shivam telugu full movie
shivam telugu movie full movie
Shivam (Telugu) telugu movie
Shivam (Telugu) reviews
release date
Follow @fullhyderabad
Follow fullhyd.com on
About Hyderabad
The Hyderabad Community
Improve fullhyd.com
More
Our Other Local Guides
Our other sites
© Copyright 1999-2009 LRR Technologies (Hyderabad), Pvt Ltd. All rights reserved. fullhyd, fullhyderabad, Welcome To The Neighbourhood are trademarks of LRR Technologies (Hyderabad) Pvt Ltd. The textual, graphic, audio and audiovisual material in this site is protected by copyright law. You may not copy, distribute, or use this material except as necessary for your personal, non-commercial use. Any trademarks are the properties of their respective owners. More on Hyderabad, India. Jobs in Hyderabad.